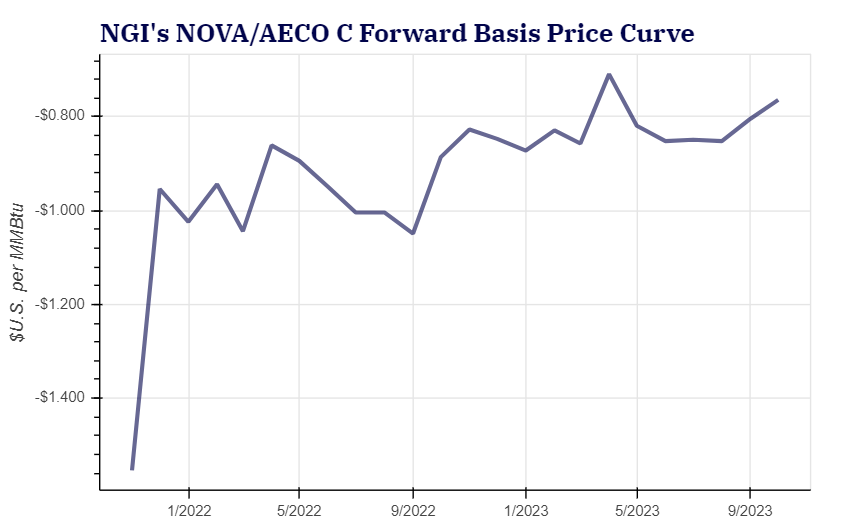 Fixed price Henry Hub forwards for November rallied $1.087 to reach $6.220/MMBtu during the period, leading a wave of week/week fixed price gains of around $1 or more at numerous hubs from coast to coast.

With the 15-day forecasts now stretching into the start of the traditional November-March heating season, the trading period saw weather begin to increase its influence on the market.

Signs of colder November temperatures arriving in the Lower 48, representing a major step-change higher for weather-driven demand expectations following a mild October, helped spark a 61.8-cent front-month rally for Nymex futures Monday. That upward momentum carried through into a 32.0-cent gain for the November contract ahead of Wednesday’s expiry.

Bears appeared firmly in control on Thursday, driving the December Nymex contract sharply lower in its first day as the prompt month. After probing as high as $6.206, December settled at $5.782, down 41.6 cents on the day.

Prices sold off Thursday even as updated forecasts appeared supportive, though questions remained as to the durability of upcoming cold in the pattern.

“Models continue to resolve colder, focused from the middle of next week through the beginning of the following week, as an upper level ridge spikes into northwest Canada, helping direct a chunk of colder air southward into the U.S.,” Bespoke Weather Services said in a note to clients Thursday. “This ridge spike looks to be temporary, with the pattern still evolving back into a state that begins to look more hostile for cold as we move into the middle third of November.”

Still, “for now, we continue to shift colder before that occurs,” including a few days projected to reach 20 gas-weighted degree days during the first week of November.

Considering a number of recent fundamentals trends, including the loosening in the supply/demand balance suggested by a string of above-average weekly storage injections, Bespoke said it suspected “the market will need more cold to ultimately sustain these price levels.”

The latest storage report from the U.S. Energy Information Administration (EIA), an 87 Bcf print in line with surveys, did little to stir buying interest in the market. The print lifted stocks to 3,548 Bcf as of Oct. 22, narrowing the deficit to the five-year average to minus-3.4%.

It marked the seventh straight week that the reported build exceeded the five-year average injection rate.

Still, Energy Aspects in a recent research note continued to caution that storage adequacy concerns can’t be ruled out, at least not yet.

Even in the event that balances result in “muted draws into November,” it won’t be enough to “deflect from the risk that a cold winter would pose significant deliverability risks and lead to price spikes,” the firm said. “We have maintained that there is a limited supply response that can readily ease the call on inventories in the event of a cold snap in the U.S.”

Among the potential sources of incremental supply, Energy Aspects is modeling a 0.3 Bcf/d of additional net imports from Canada versus its baseline expectation of 5.4 Bcf/d for the 2021/22 winter.

“However, risks are growing to Canada’s ability to boost trade, with cross-border flows for the rest of 4Q2021 likely to remain range-bound in contrast to typically seasonal growth at the outset of winter,” Energy Aspects said. “…While we believe that 0.3 Bcf/d can be unlocked from Canadian net imports in the event of U.S. cold, a concurrent intense Canadian cold snap could see western provinces hoard inventories to meet their own demand.”

How Is Europe’s Natural Gas Situation?

Looking across the pond, Goldman Sachs researchers in a recent note offered an update on the precarious natural gas supply situation in Europe. The firm said it’s forecasting a $30 Dutch Title Transfer Facility (TTF) price for November and December.

“We reiterate our view that the longer the current Russian flow shortfall lingers, the longer the current levels of European demand destruction will need to remain in place, incentivized by TTF near $30,” Goldman analysts Samantha Dart and Damien Courvalin said in a note to clients. “By the same token, should Russian flows to Northwest Europe increase sequentially…TTF would likely balance the market at lower levels.”

This poses a “downside risk” to the firm’s forecast TTF price through the end of the year, but “even in this scenario we would expect TTF to remain in the high $20s initially to continue to incentivize gas-to-oil substitution and some degree of industrial demand destruction until winter weather risks decline more significantly into year-end,” the Goldman analysts said.

Waha Basis In The Red

The overall direction of forwards prices during the Oct. 21-27 time frame was unquestionably higher. However, there were a number of hubs that saw significant basis discounts during the week, including in New England, the Rockies, the Midcontinent and in the Permian Basin.

In the Northeast, Algonquin Citygates front-month basis gave back 51.7 cents during the period, ending at a $1.827 premium to Henry Hub.

Meanwhile, in the Midcontinent, Northern Border Ventura basis flipped from plus-7.2 cents to minus-16.4 cents, a 23.6-cent swing.

In the Permian, Waha basis widened to minus-65.5 cents, a 38.4-cent discount for the week.

This year has seen “continuously solid gas production growth in the Permian, with gas volumes currently sitting near 14 Bcf/d, up around 1.5 Bcf/d versus this time last year,” Ferguson said in a recent blog post. “What’s more, at today’s crude oil prices, which encourage increasing production of oil and associated gas, there is no end in sight for Permian gas growth.

“Which means, as many gas traders already know, that the Permian’s primary gas market, the Waha Hub, may soon be headed back into the familiar territory of deep basis discounts.”

Under its “unconstrained mid-price forecast,” RBN is modeling around 1 Bcf/d of production growth per year out of the Permian over the next few years. Output is projected to hit 18 Bcf/d by 2025.

After enjoying strength in 2021, where Waha prices go from here will depend on “how long global commodity prices hold up, how U.S. producers respond to those prices, whether planned capacity additions make it across the finish line, and how legacy infrastructure holds up,” Ferguson said.