With the return of significantly colder weather not on the radar until around the new year — and milder temperatures likely until then expected to substantially tighten current natural gas storage deficits — January forward prices plunged an average 34 cents from Dec. 13-18, according to NGI’s Forward Look. 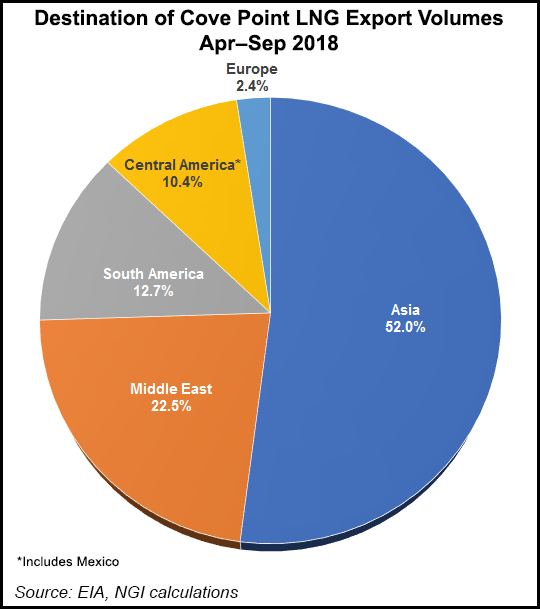 In fact, prices for the remaining winter strip also plummeted as national demand was forecast to be “quite light and bearish” the next 10 days then increase toward normal/neutral as a little stronger cooling arrives across the northern United States to close out the month, according to several forecasts. Nymex futures led the declines as the January contract dropped 28.6 cents for the five-day period, while February tumbled 28.5 cents to $3.742 and March slid 29.8 cents to $3.558.

As for details, cold air forecast over the West was expected to spread eastward Dec. 30-Jan. 2, aided by more frigid conditions over southern Canada spilling across the Midwest and Northeast, but likely still not strong enough to result in stronger-than-normal demand, according to NatGasWeather.

Overnight Tuesday weather data was slightly colder trending with the end-of-December pattern, but “it’s still not quite impressive enough to be considered bullish. Although, we need to be cautious because any further colder trends around the start of the year, and weather sentiment could begin to lean towards the bullish side,” the firm said.

By mid-January, widespread colder weather was expected to arrive, according to Bespoke Weather Services. “But models made it clearer that it will take time and that early January can still be mild.”

There are highly conflicting signals regarding when more bone-chilling weather will resume, EBW Analytics said. The models “could shift again at any time,” triggering an even stronger rebound in natural gas prices compared to what was seen in the market earlier in the week, and careful attention to weather was essential, the firm said.

The recent erratic swings at the front of the futures curve reflect “the continued sharp split between bulls and bears and very high volumes of computer-driven trading attempting to take advantage of the highest market volatility in years,” EBW CEO Andy Weissman said.

“Any further improvement during the first half of January, and the threat of hefty deficits causing supply issues this winter season will notably lessen,” the firm said. This is why it views the first two weeks of January as “a critical period where strong cold blasts need to return if bulls are going to reignite this market.”

Still, a normal weather environment from January to March may lead to a withdrawal season-ending inventory level of just above 1.1 Tcf based on Mobius Risk Group’s view of current weather-adjusted supply and demand. “A season-ending level this low would likely be uncomfortably low, and thus even a modest colder shift to weather forecasts could drive a very sharp retracement of the recent price decline,” analysts said.

As for Thursday’s storage report, estimates pointed to a withdrawal in the low to mid-130 Bcf range. Kyle Cooper of IAF Advisors and Bespoke Weather Services each projected a 133 Bcf draw, while EBW expected a 145 Bcf pull. A Bloomberg survey of 11 market participants had a range of 118 Bcf to 146 Bcf with a median draw of 135 Bcf. A Reuters poll of 16 market participants had an even wider range of withdrawals, with a lowball estimate of 94 Bcf, a high of 153 Bcf and a median of 133 Bcf.

Last week, the EIA reported a 77 Bcf withdrawal, which left inventories sitting at 2,914 Bcf as of Dec. 7.

Steep declines were seen across the country for the winter months, but Northeast markets took those losses to another level as demand continued to wane even before the upcoming holiday break. A strong weather system was forecast to spin up over the South and Southeast through Thursday, then track up the East Coast Friday and Saturday with areas of rain and snow. However, it is not expected to be very cold, according to NatGasWeather.

“The rest of the country will be rather mild, with above-normal temperatures, more than offsetting extra demand caused by this current southern U.S. system,” the firm said.

Another modest cold shot was expected across the Great Lakes and Northeast for Christmas Eve/Christmas, “but again not cold or widespread enough to increase national demand above normal.” Colder systems were expected into the West next week for locally stronger demand, but those systems were expected to intensify mild high pressure over the important eastern United States, keeping lighter-than-normal national demand in place, NatGasWeather said.

As such, sharp declines of 50-70 cents were seen at most pricing hubs, while volatile New England markets posted even more dramatic decreases. Algonquin Citygate January prices plunged $1.53 from Dec. 13-18 to reach $10.523, while February dropped $1.13 to $10.616 and the balance of winter (February-March) slid 83 cents to $9.00, according to Forward Look.

Most Appalachia pricing hubs posted declines that were in line with futures, while sharper moves lower were seen at Dominion Energy Cove Point and Texas Eastern M-3, Delivery, the latter of which has been operating under restrictions because of maintenance on the Texas Eastern Transmission (Tetco) pipeline.

In fact, the pipeline on Tuesday declared a force majeure from an unplanned outage at its Entriken Compressor Station in Entriken, PA. While efforts to repair the compressor station to full capacity are underway, the estimated time of restoration was unclear, a notice on Tetco’s website stated.

Just days earlier on Dec. 15, the pipeline had restored capacity through its Bernville compressor station.

With prices coming off recent highs, exports from the Cove Point liquefied natural gas facility (LNG) to Europe have once again “come in the money” on a variable-cost basis, according to RBN Energy.

Variable regasification costs are similar for Cove Point and Sabine Pass offtakers (in the 5- to 50-cent/MMBtu range), which means that Transco Zone 5 prices would need to be at least 75 cents to $2 below the UK National Balancing Point (NBP) price for Cove Point LNG exports to be in the money to Europe, RBN analyst Amber McCullagh said in a recent blog post.

Prices at Transco Zone 5, which is the relevant market for liquefaction economics, were the same as Dominion Energy Cove Point for those months, Forward Look data showed.

Although all of Cove Point’s offtakers are based in Asia, almost half of the cargoes sent from the East Coast facility have gone to markets outside Asia, according to RBN. However, that’s not been the case for much of this heating season to date as Northeast gas prices have traded in line with prices at the NBP, even before accounting for the variable costs of getting gas to the UK, McCullagh said.

However, if recent history is any guide, more cargoes may not necessarily head to Europe, even with a positive Transco Zone 5-NBP spread.

“That spread has been in the money just about every day since Cove Point came on line in April, yet Europe accounted for only 2% of Cove Point cargoes through September,” noted NGI director of strategy and research Patrick Rau.

To be fair, Europe has only accounted for roughly 6% of cargoes from Sabine Pass during that time period, “so it’s not as though Europe has been lining up to take gas from the U.S. this year,” Rau added.

The gains come as FortisBC told customers on Thursday that they can go back to normal use after an explosion and fire on Enbridge Inc.’s Westcoast Transmission that led the utility to urge customers to conserve energy usage.

FortisBC cited the conservation efforts, milder weather, healthy storage inventories and increased flows on Westcoast as the reason for the return to business as usual, but said “until Enbridge’s natural gas transmission pipeline returns to 100% capacity, we encourage our customers to be mindful of their energy use while keeping homes warm and businesses working.”

Meanwhile, the erratic swings that have become commonplace in the Permian Basin continued during the Dec. 13-18 period, although outright prices remain at a steep discount to other markets across the country. El Paso-Permian January jumped 39 cents to $2.188, as did February, which hit $2.25. The balance of winter was up 34 cents to $1.92, according to Forward Look.