Natural gas forward prices continued to ride the momentum of gains experienced in the last full week of April as a burst of stronger-than-normal demand lingered long enough to continue supporting the market during the April 25 to May 1 period. June prices rose an average of 6 cents during that time, while the balance of the summer (June-October) edged up a nickel, according to NGI’s Forward Look. 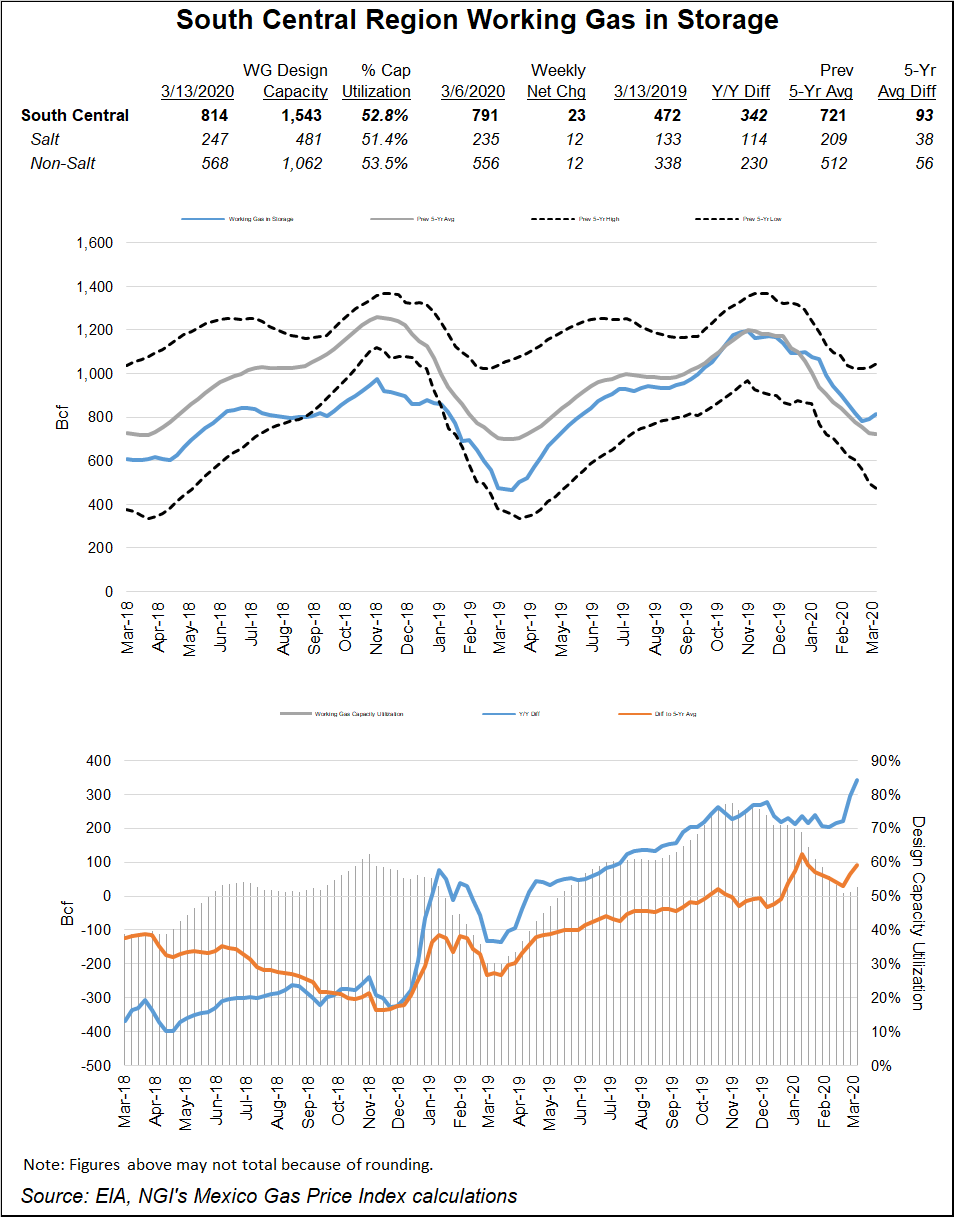 The latest weather data remained at odds, although overall, resulted in little net change in the forecast number of gas-weighted degree days for the period. The American model showed slightly higher demand, while the European data reflected demand being a little lower, according to Bespoke Weather Services.

“Big picture is the same, with demand elevated the next couple of days due to heat in the Southeast, which does linger some into next week as well,” Bespoke chief meteorologist Brian Lovern said.

One trend that did show up more in the overnight Wednesday runs was a weaker overall pattern depiction around the middle of the month, with less potential for elevated cooling degree days at that point. “…That is an idea that has some merit” based on what Bespoke is seeing with the Madden-Julian Oscillation propagation and some cooler risk just beyond mid-May.

With April demand falling well short of April 2018’s levels due to exceptional cold at that time, the prospect for May demand to also fall short of year-ago levels has market bears foaming at the mouth as the mild weather set-up is seen as significantly improving storage deficits. As of April 19, storage inventories had already risen to a 55 Bcf surplus to last year’s levels.

On Thursday, the Energy Information Administration (EIA) reported a massive 123 Bcf injection that propelled stocks to some 128 Bcf above year-ago levels and shrunk the deficit to the five-year average to 316 Bcf, down from 369 Bcf a week earlier.

The reported build came in 7 Bcf above Bespoke’s estimate of a 116 build, “and keeps balances looking very loose, with the two-week average versus the five-year average balance still implying over 4.2 Tcf at the end of the season.”

While this is unrealistic, it shows that, so far, there has been little improvement in balances despite lower prices, the firm said. That likely changes next week, with burns tighter and overall exports back higher as well, but continued tightening would need to be seen “in order to be confident that we can put together a sustained move to or over the $2.60 level in the June contract.”

That key $2.60 level moved further out of reach as prices dropped as low as $2.564 following the EIA’s report, which most likely reflected a miss on demand, according to Het Shah, managing director at Enelyst, an energy chat room hosted by The Desk.

“Shoulder seasons are typically hard to model, especially when you get abnormal weather patterns. Models break down,” Shah said.

Indeed, the South Central, where demand has been quite low so far this summer, continued to surprise to the upside after the EIA reported a 50 Bcf build in that region. Inventories there rose to 666 Bcf, with salt facilities injecting 20 Bcf and non-salts adding 29 Bcf into stocks.

“These builds aren’t for next winter. They are for what can happen before winter,” said Huntsville Utilities’ Donnie Sharp, senior natural gas supply coordinator, on Enelyst.

The EIA reported a 28 Bcf injection in the East and a 26 Bcf build in the Midwest. The Pacific region added 14 Bcf, while the Mountain rose by 5 Bcf, according to EIA.

Weaker year/year demand and rising production have pushed the last five weeks’ injections higher than average, narrowing the storage deficit by almost 200 Bcf, from around 500 Bcf (31% below average) at the end of March to roughly 310 Bcf (17%), according to Jefferies Equity Research. Coming into the refill season, near-record levels of injections (2.6 Tcf) were needed for storage to reach normal levels (3.7 Tcf) by the end of summer.

“The last five injections have pushed 355 Bcf into storage (versus the five-year average of 110 Bcf), giving storage a head start in the shoulder months before we enter the summer,” Jefferies analysts said.

Thursday’s EIA report is expected to be the first in a string of triple-digit injections the market will face over the next month given the mild temperature outlook, providing an overwhelmingly bearish macro outlook for near-term prices. Furthermore, while LNG exports have risen back close to earlier highs, market bulls were dealt a blow on Monday when McDermott International Inc. indicated that Sempra Energy’s Cameron LNG export project would not reach full in-service until 2020. Sempra management had expected to have all three trains online this year.

While initial production (IP) from Train 1 is set for this quarter, McDermott CFO Stuart Spence said that IP from Cameron trains 2 and 3 is set for 1Q2020 and 2Q2020, respectively.

“Pushing these two trains to 2020 leaves total expected U.S. LNG export capacity at around 6.6 Bcf/d at year-end 2019 (though feed gas flows typically run about 15% ahead of capacity at full utilization),” Jefferies analysts said.

On a brighter note, Infraestructura EnergÃ©tica Nova (IEnova), Sempra’s Mexico subsidiary, indicated Tuesday that the 2.6 Bcf/d Sur de Texas-Tuxpan marine pipeline should be online “in a few weeks,” in time for the Mexican summer when natural gas demand traditionally peaks. In-service had officially been pushed back to May, although an industry source told NGI last month that June was a more likely timeline for the project.

“We’re in preconditioning and commissioning,” IEnova CEO Tania Ortiz said during a call to discuss quarterly results. “We should be calling for gas in the next couple of weeks to do our testing and line-packing. So, we are in the final few weeks of finishing the project.”

Nevertheless, even once the project comes online, it would likely operate at just 65% of capacity due to “indefinite suspensions” of the Tuxpan-Tula and Tula-Villa de Reyes projects in central Mexico, according to BTU Analytics.

“Although there are multiple pipeline projects under development in Mexico, a history of delays should temper expectations of relief for U.S. gas prices,” BTU analyst Connor McLean said.

After pipeline maintenance earlier this spring sent Permian Basin pricing below zero, it’s not surprising that the region posted one of the only losses in forward prices during the April 25 to May 1 period.

El Paso Permian June prices fell 7 cents during that time to average just 31.7 cents, according to Forward Look. July slipped 6 cents to 71.2 cents and the balance of summer dropped 4 cents to $1.03.

The steeper declines in the nearby months were likely due to continued maintenance on the El Paso Natural Gas (EPNG) system, which revved up a notch this week and further restricted gas flows out of the Permian. On Wednesday, EPNG said it had tightened the capacity restriction resulting from an ongoing force majeure, cutting about 50 MMcf/d relative to the highest flow volume in April.

EPNG’s Caprock force majeure has been in effect since late December, when a compression unit at the Caprock Station failed. Since then, an additional five compression units have gone down at various times: the other unit at the Caprock Station as well as units at the Belen and Roswell stations. All have been grouped under this same force majeure and have resulted in decreased flow capacity for the “LINCOLN N” meter, according to Genscape Inc.

In its latest update, EPNG announced the failure of equipment associated with Roswell’s Unit No. 2 and Belen’s Unit No. 2. “This decreases throughput capacity by an additional 56 MMcf/d with end date still to be determined both for this reduction and for the force majeure as a whole,” Genscape natural gas analyst Joe Bernardi said.

At the other end of the spectrum, southern California prices were much stronger than every other market across the country as storage inventories in the region remain low heading into May after a notable drawdown in February and March.

SoCalGas’ system-wide inventory drew down relatively quickly in February and March due to considerably colder-than-normal weather and increased demand, according to Genscape. Using the previous two-year average as a point of comparison (with older years’ inventories being less comparable due to the massive changes at Aliso Canyon), “this winter’s inventories were above normal — and as high as 126% of normal — from the beginning of November through early February,” Bernardi said.

Then SoCalGas storage levels dropped to as low as only 79% of the past two-year average by mid-March, setting a new post-Aliso Canyon leak record low at just 35 Bcf, according to Genscape. Since then, with milder-than-normal weather keeping demand at or under normal levels, inventories have been building back up in earnest and are now once again above the two-year average for the end of April.

However, SoCalGas announced last week that the return of its L235-2 import line would be delayed until at least June, after having previously been expected back in late April, Bernardi said.

“L235-2 is one of SoCalGas’ critical import lines that has been out of commission since an explosion in October 2017. Flowing supply has taken on increased importance for SoCalGas with working inventory at Aliso Canyon capped by the California Public Utilities Commission at a maximum of 34 Bcf, about 40% of its previous maximum before the October 2015 leak.”

A similar situation has played out at Pacific Gas & Electric, where storage inventories are still well below their previous five-year average for the beginning of May but have recently climbed above five-year lows. And while forward prices at PG&E Citygate are among the highest in the country, they haven’t experienced the same volatility as SoCal Citygate.