Amid erosion of value in the futures market as traders continued to try to price in winter supply risks, regional natural gas forwards pulled back sharply throughout the Lower 48 during the Aug. 31-Sept. 7 period, NGI’s Forward Look data show. 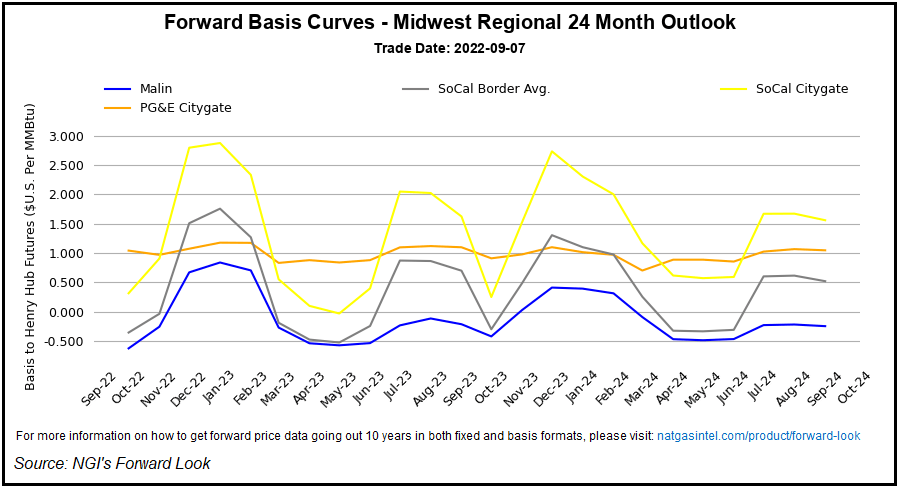 From coast to coast, hubs posted fixed price declines of $1-plus for October delivery, paced by  a $1.199 discount at benchmark Henry Hub, which finished the period at $7.848/MMBtu.

The unusual circumstances surrounding the upcoming winter, notably in the context of Europe’s ongoing energy crunch, continued to drive volatility during the period as the market contemplated the risks posed by exposure to overseas pricing.

On the domestic front, strong production numbers and fading heat in the transition to the shoulder season also factored into the equation.

Nymex futures posted a string of steep sell-offs, including a 64.1-cent nosedive for the October contract on the market’s return from the Labor Day holiday Tuesday.

The front month recovered modestly in Thursday’s session, adding back 7.3 cents to settle at $7.915 following an on-target government storage report that showed Lower 48 stockpiles sitting at an 11.5% deficit to the prior five-year average as of Sept. 2.

The Environmental Protection Agency’s (EPA) recent decision not to exempt Cheniere Energy Inc.’s export terminals from reinstated emissions standards added uncertainty to the export outlook. Cheniere said it did not expect the EPA decision to impact its operations beyond “unwarranted expenditures.”

In the coming weeks, prices could continue to slide on “surging natural gas supply” and potential mild October weather, according to the analyst.

“Still, a price-inelastic demand curve and the susceptibility of Nymex futures to any signs of early winter cold suggest another run higher remains likely over the next 30-45 days — even if prices ultimately collapse by mid-winter,” Rubin said.

The sell-off in the futures market also accompanied sizable discounts in peak winter pricing for demand hubs in the Midwest and Northeast during the Aug. 31-Sept. 7 period.

In the Midwest, fixed price trading at locations like Dawn and Chicago Citygate generally followed a similar pattern to Gulf Coast pricing for December through February delivery. Chicago Citygate January pricing tumbled $1.183 to end at $8.881, while Dawn dropped to $7.994, a $1.195 decline.

Capacity-constrained Mid-Atlantic and Northeast locations, meanwhile, saw larger discounts along the winter curve while continuing to trade at steep premiums to surrounding regions.

The Energy Information Administration (EIA) reported a net 54 Bcf injection into Lower 48 natural gas storage for the week ended Sept. 2. That lifted inventories to 2,694 Bcf, 349 Bcf below the five-year average.

Inventories in the EIA East region ended the report period at 635 Bcf, a 13.6% deficit to five-year average levels. Midwest stockpiles stood at 776 Bcf as of Sept. 2, off 7.9% versus the five-year average, according to EIA.

Conditions in the state remained tight on Thursday, with CAISO extending a flex alert and calling on customers to voluntarily conserve energy.

“California day-ahead peak power prices hit another summer high, with San Diego Gas and Electric prices hitting over $900/MWh for the peak hours Monday and over $1,200/MWh Tuesday,” Kronk said. “…Californian heat waves are likely to get more intense in the coming years, so a large investment in installed capacity would be beneficial for the state to avoid blackouts.”