Natural gas forward prices were relatively stable from Aug. 9-14 amid increasingly hotter weather forecasts, near-record production and a shift to more favorable conditions for Atlantic storms. The September contract rose just 3 cents on average, while smaller increases were seen throughout the rest of the curve, according to NGI’s Forward Look. 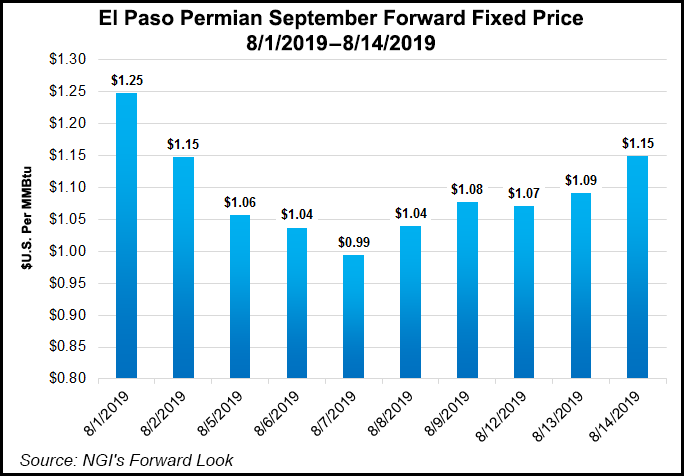 The small overall changes in forwards were not reflective of the volatility that occurred on some days during the week. For example, on Wednesday alone, the prompt month swung in an 8-cent range before going on to settle pretty much flat on the day. Tuesday saw a similar range.

Traders appeared to have a hard time pushing up the curve despite increasingly hotter weather forecasts for the rest of August and into September. The Nymex September futures contract ultimately rose just 2.4 cents for the Aug. 9-14 period to reach $2.143. October was up 2.1 cents to $2.133, while the winter strip (November-March) slipped a penny to $2.42.

As for the latest weather outlooks, the overall weather picture remains mostly the same, with just a slight addition of gas-weighted degree days (GWDD) over the next 15 days, including a couple of near-record GWDD totals around the middle of next week, according to Bespoke Weather Services.

“We do see less heat in the South in Thursday’s six- to 15-day period, with more occasional rain risks, including an outside chance the tropics come to life in the Gulf of Mexico, but the West is hotter, hence little change in the GWDD totals,” Bespoke chief meteorologist Brian Lovern said.

Forecasters sees the next six weeks as likely being the most active stormwise, with the U.S. National Weather Service forecasting 10 to 17 named storms in the Atlantic. Last year, there were 15, including hurricanes Florence and Michael that caused more than $49 billion in damage. So far only two named storms have emerged in the Atlantic this year, and only one came during the hurricane season — Hurricane Barry, which looped through the Gulf of Mexico in mid-July.

However, with the vast majority of Lower 48 production onshore, any potential storms are seen as demand killers. Furthermore, rampant supply growth, which generally remains at or above 90 Bcf/d, has generally kept pace with summer demand and allowed for a quick replenishment of storage inventories that had sunk more than 700 Bcf below historical levels earlier this year.

That’s not to say bulls are completely out of the game. The bias toward the end of August continues to be for above-normal heat/demand, a theme that will likely remain heading into September, according to Bespoke.

Already this week, scorching temperatures in Texas sent power demand to record levels and prompted the state’s electric grid operator to use every tool in the shed to meet loads, even the most inefficient ones. The extreme heat — with a several day span of triple-digit temperatures — was credited for some of the intraday volatility seen in futures this week.

The reported build was nearly 10 Bcf below what analysts had expected, though still came in well above last year’s 35 Bcf injection and was on par with the five-year average, according to EIA.

Natural gas futures responded immediately to the bullish storage data, with the September Nymex contract sitting at $2.18 just before the print hit the screen and then steadily climbing in the half-hour afterward. By 11 a.m. ET, the prompt month was trading a dime higher day/day at $2.243, a level it pretty much held through the rest of the session. The Nymex September contract went on to settle Thursday at $2.232, up 8.9 cents. October rose 8.3 cents to $2.237.

“Once factoring in the week/week decline in liquefied natural gas (LNG), this number is quite tight,” Bespoke chief meteorologist Brian Lovern said. “The magnitude of the miss is difficult to rationalize.”

Still, heat in Texas finally showed up in a big way over the last week, and wind output was lower as well, “which is always tough to model. I still can’t explain 10 Bcf,” Lovern said.

Bespoke had seen downside risk in the EIA report, but said there may have been some impact from the Texas Eastern Transmission (Tetco) explosion earlier this month as well, according to the firm. “If this level of tightness shows again next week, however, the game may have finally changed,” Lovern said.

Several other analysts on energy chat room Enelyst, which is hosted by The Desk, agreed that the Tetco explosion could have had an impact on this week’s storage data, with the reshuffling of flows making the injection “almost completely unestimatable.”

Still, others said that Northeast production has continued to reach new heights despite the Tetco outage, and that maintenance at the Sabine Pass LNG terminal offset the Tetco impacts in the South Central region.

Ahead of the EIA report, a Bloomberg survey of 11 analysts had an injection range of 45 Bcf to 65 Bcf, with a median of 58 Bcf. A Reuters poll produced the same range and median, while NGI projected a smaller 52 Bcf injection that proved to be more in line with the actual EIA figure.

There were only a handful of pricing hubs across the United States that moved out of step with Nymex futures. Two of those were in the Permian Basin, where strong demand both in Texas and out West provided some much-needed relief to regional prices.

El Paso Permian September prices soared 11 cents from Aug. 9-14 to reach $1.149, while the balance of summer (September-October) tacked on 8 cents to hit $1.28, according to Forward Look. However, that’s where the stout increases stopped as the rest of the curve shifted only a penny or so, with the winter strip settling at $1.69.

The boost in nearby forward contracts comes amid ongoing strength in the cash market as triple-digit temperatures in Texas and equally hot weather in the Southwest and California have fueled demand. Waha spot gas on Wednesday traded as high as $1.72, the highest price of the summer so far, according to historical NGI data.

Cash prices remained strong on Thursday, and it’s fair to say that Texas heat seen lingering through at least August could provide further support. However, Kinder Morgan Inc. on Thursday confirmed that its highly anticipated Gulf Coast Express Pipeline (GCX) had begun flowing gas as part of the commissioning phase of its startup, which is scheduled for late September.

Once the pipeline enters full service, some 2 Bcf/d of associated gas will be unleashed into the market, setting the stage for a potential cratering of prices as temperatures wane during the fall season. Furthermore, the EIA estimates that Permian drilled-but-uncompleted (DUC) wells have reached 3,999, or 49% of DUCs nationally.

“With EIA estimating 515 Permian well completions/month over the past three months, this represents an eight-month supply of DUCs, even if no new wells were drilled,” EBW Analytics said.

Over the past year, an explosion of drilling has led to 1,229 (+44%) new Permian DUC wells, according to the firm. In recent months, however, fewer newly drilled wells and growing well completions have decreased the DUC growth rate.

In the months ahead, new Permian crude pipelines and GCX may lead to a flurry of well completions as producers race to fill pipeline volume commitments, “potentially leading to a deluge of production and leading to downward pressure on both Nymex West Texas Intermediate and natural gas futures,” EBW said.

Boosted by a colder look to forecasts for early December, natural gas futures extended their recent gains in early trading Tuesday. The December Nymex contract was up 5.5 cents to $2.766/MMBtu at around 8:40 a.m. ET. January was up 6.3 cents to $2.886. After “not being quite as bearish” in Monday’s runs, the weather data…