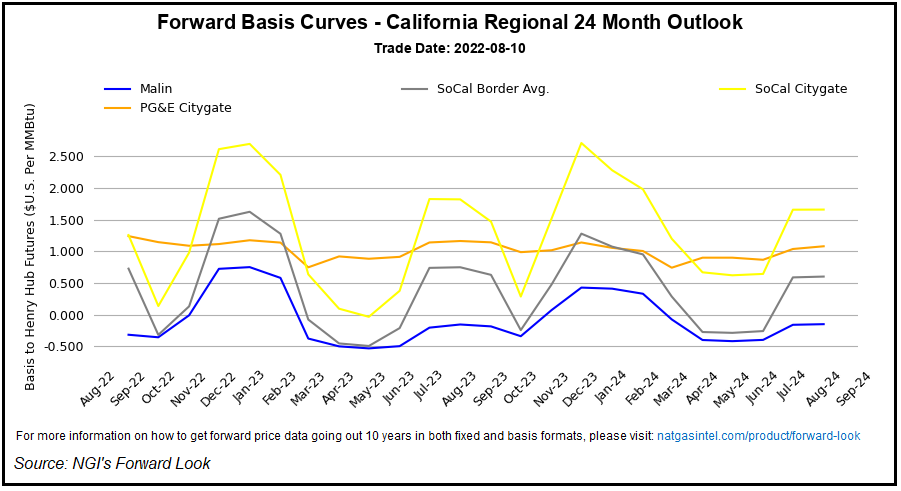 Prices for September delivery at benchmark Henry Hub ended the period at $8.203/MMBtu, a 6.4-cent decline week/week. Modest fixed-price front-month discounts were the norm throughout the Lower 48 during the period.

However, with ample heat in the outlook for the western Lower 48, supply-constrained Southern California hubs bucked the broader trend to post substantial fixed price and basis gains for September delivery.

A more temperate August forecast for the eastern Lower 48, meanwhile, initially helped drive Nymex futures lower during the Aug. 4-10 trading period. That was before production weakness and new developments in the Freeport LNG saga sparked successive rallies on Tuesday and Wednesday (Aug. 9-10).

Freeport removed its force majeure declaration for the June incident that forced the Texas liquefied natural gas (LNG) export terminal offline; the move seemed to reinforce perceptions that a full return to service could happen earlier than previously expected.

“With Freeport apparently assigning blame to human error rather than a mechanical fault, it is possible that regaining federal approvals will be an easier process and increase the chances of achieving an October restart,” EBW Analytics Group senior analyst Eli Rubin told clients Thursday.

As traders shrugged off a somewhat larger-than-expected 44 Bcf build in the latest Energy Information Administration (EIA) storage report, the September Nymex contract continued on its upward trajectory in Thursday’s session, surging another 67.2 cents to settle at $8.874.

NatGasWeather characterized the strength of the gains throughout the week as “curious” in the context of “more comfortable weather patterns arriving for the coming 15 days.” This suggests “bulls are using other factors to justify gains, such as strong power burns on light wind energy generation and slightly weaker production versus last week.

“It’s also possible strong European gas prices the past several days are carrying over to U.S. markets,” the firm added.

EBW’s Rubin said the firm’s analysis “suggests that natural gas remains undervalued in the medium-to-longer term,” though fading weather-driven demand this month “continues to detract from the near-term picture.”

Overseas, prices at the Dutch Title Transfer Facility, trending upward to north of $61.50/MMBtu as of Thursday, are likely to remain elevated “so long as gas supply from Russia appears to remain tight in the foreseeable future,” Rystad Energy analyst Lu Ming Pang said in research note.

“The Nord Stream 1 pipeline continues to export gas from Russia into Europe at 20% capacity…with average flows remaining stable around that level over the past week,” the analyst said.

The European Union (EU) finds itself in a “struggle with a tight gas supply” in its effort to refill storage inventories to 80% by Nov. 1, according to Pang, who said EU inventories were at 72.7% full as of Thursday. This comes as demand in Asia has been “subdued” recently “despite record temperatures….

“The high temperatures have boosted the number of LNG cargoes from long-term contracts going into Northeast Asia, but activity on the spot market has so far not reached a level where Asia is directly competing with Europe for cargoes,” the analyst said. “…Asian buyers continue to adopt a wait-and-see approach, citing high prices and healthy inventories that would allow them to get through the warm summer.”

For days eight through 15 of the outlook period, “hot high pressure will rule the western half of the U.S. with highs of 80s to 100s, hottest over California, the Southwest and West Texas,” NatGasWeather told clients Thursday.

Looking ahead to the upcoming winter, the perennially pipeline-constrained market served by Southern California Gas Co. can have a measure of confidence in terms of supply adequacy, according to Wood Mackenzie.

“A combination of above-average inventory and a stronger-than-expected performance for Ehrenberg last winter places looser expectations for SoCal, despite the ongoing L2000 force majeure” on the El Paso Natural Gas system, Wood Mackenzie analyst Quinn Schulz wrote in a recent note to clients.

However, this confidence in winter supply availability is subject to contingencies, according to the analyst.

First, power demand in Arizona during the third quarter will need to follow historical trends and decline by the start of winter, Schulz said.

“The second assumption,” Schultz said, “ is that cooling demand in the coming weeks for Southern California remains more or less within expectations.”