Loosening balances, evidenced by a weekly inventory build that overshot major surveys, accompanied declines in forward prices for most of the Lower 48 during the Aug. 12-18 trading period, NGI’s Forward Look data show. 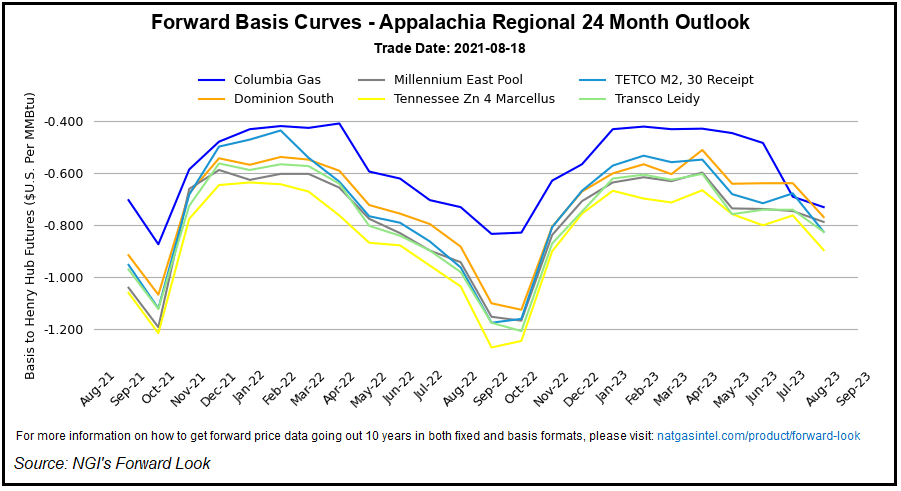 Nymex September futures experienced some up-and-down action, but on the whole lost ground during the Aug. 12-18 time frame, including a steep 10.9-cent sell-off on Tuesday (Aug. 17).

An 8.1-cent decline in September Henry Hub coincided with fixed price front-month discounts at most Lower 48 hubs for the period.

Meanwhile, forward contracts at hubs in the West and in Appalachia saw both fixed price gains and strengthening basis as they bucked the broader market downtrend.

The print, reflecting changes during the week ended Aug. 13, came in above the upper end of survey ranges. Still, price action suggested the build did not catch traders by surprise. At the least, buyers seemed satisfied that discounts leading up to the report had been sufficient to account for the larger print.

Shortly after the EIA data crossed trading screens, September was hovering around $3.750. A steady climb from there saw the front month finish back up at $3.830, down 2.2 cents day/day but well off the lows.

The print included a reclassification from base gas that resulted in a 4 Bcf increase to working gas in the South Central’s nonsalt facilities. According to Bespoke Weather Services, that put the “real” implied weekly flow at plus 42 Bcf.

“This is the loosest number in a long time, and explains much of the recent selling, though we see the next two numbers coming in much tighter versus this number, though not as wicked tight as some of the numbers seen in the last several weeks,” Bespoke said shortly after the release of EIA’s report.

Technical support for the Nymex prompt month contract was challenged Thursday — with prices dropping as low as $3.734 — but ultimately held.

Support at these levels “must be broken to have a case for a more significant top rather than another minor bull market correction,” ICAP analyst Brian LaRose told clients in a note. “Suspect if we are going to have any chance of seeing such a top develop,” Asian and European natural gas benchmarks “will all need to roll over as well. Bears have no case otherwise.”

For the week ended Aug. 13, analysts at Energy Aspects said they observed a sequence of days during which natural gas saw its share of thermal generation drop below 60%, even amid peak summer 2021 load nationally.

“Although price may have played some role in backing out gas, wind generation hitting its highest level since late June inversely underscores the role that underperformance in renewables can play in keeping gas generation elevated, even at high gas prices,” Energy Aspects said in a recent research note. “Nonetheless, our expectation is that gas can return thermal share to coal in the shoulder season once overall load normalizes.

“These days of weaker gas thermal share (even if only marginally weaker) give us confidence that price will be able to back off some power come September’s milder weather.”

Pricing hubs in the West, especially in Southern California, saw the biggest basis moves during the Aug. 12-18 trading period. SoCal Citygate front-month basis surged $1.140 higher to plus $3.294, while SoCal Border Avg. jumped from plus 60.4 cents to plus $1.403.

Spot market prices earlier in the week felt the shock of a fatal pipeline blast on the El Paso Natural Gas (EPNG) system.

Kinder Morgan Inc. said a segment of the EPNG system near Coolidge, AZ, experienced a pipeline failure and subsequent fire on Line 2000 early Sunday (Aug. 15). Two people died in the blast, and one other person was injured.

Meanwhile, hubs throughout the Northeast and Appalachia saw notable basis gains of around a dime or more for the Aug. 12-18 period.

Cooling demand expectations for East Coast population centers may have helped to spur buying interest. Maxar’s Weather Desk as of Thursday showed a stretch of mostly above-normal temperatures blanketing the Interstate 95 corridor from Washington, DC, to Boston until late this month.

Transco Zone 5 basis picked up 11.5 cents for the period, climbing to plus 44.9 cents. Upstream in Appalachia, Eastern Gas South prompt month prices closed the gap on Henry by 10.5 cents, going from minus $1.021 to minus 91.6 cents.

When viewed in terms of year/year change, balances in the Appalachia region have tightened this month compared to earlier in the summer, according to a research note published Wednesday by RBN Energy LLC.

“Month-to-date, the supply-demand balance estimates indicate that the market is much less bearish versus last year in August than it was in July or previous months,” RBN analysts said in a report to clients on Appalachian fundamentals. “In July, the market carried a 2.5 Bcf/d surplus versus July 2020. In August to date, that year-on-year surplus has narrowed to 0.9 Bcf/d, which is also the tightest balance we’ve had so far this injection season.”

The RBN analysts pointed to production and power burn as contributing factors to the tighter balances. The firm estimated 34.3 Bcf/d of production month-to-date, versus 34 Bcf/d in July, with July 2020 shut-ins resulting in a narrower year/year supply increase so far this month.

This comes as regional demand from power, residential/commercial, industrial and Cove Point liquefied natural gas exports was flat year/year through the first 17 days of August; July demand trailed year-ago levels by 1.8 Bcf/d, according to RBN estimates.