A trifecta of headwinds delivered a gut punch to natural gas forward prices for the Aug. 2-7 period, with 10-cent declines at the front of the curve and nearly-as-steep losses seen through next summer, according to NGI’s Forward Look. 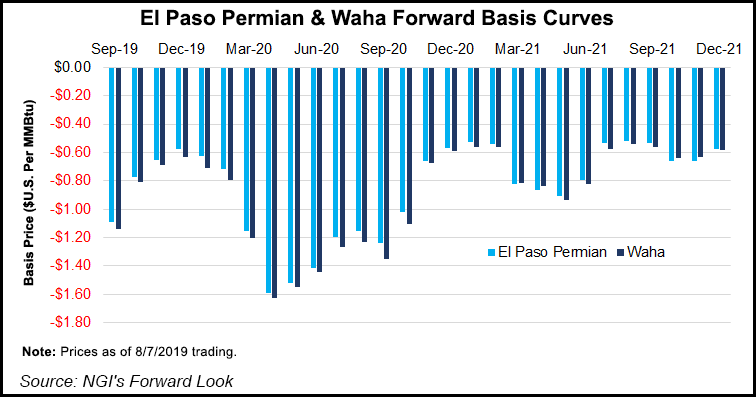 Permian Basin markets suffered most as surging production combined with ongoing pipeline maintenance to suppress prices in the region, with September sliding more than 20 cents in the region. California markets also posted considerable losses despite ongoing heat in the state.

The majority of pricing locations, however, fell in line with Nymex futures, which got beat down early in the Aug. 2-7 period as feed gas deliveries to liquefaction facilities along the Gulf Coast started to decline.

The September contract tumbled 8 cents on Friday and then dropped another nickel on Monday after Cheniere Energy Inc. confirmed that Trains 3 and 4 at its Sabine Pass Liquefied Natural Gas (LNG) terminal were undergoing scheduled maintenance. The company also noted that commissioning at the second production unit at its Corpus Christi facility was the cause for its reduced intake.

A new high for production added to the dismal outlook for prices, although some pipeline maintenance later in the week contributed to a temporary dip in output. The September Nymex contract ultimately dropped 12 cents from Aug. 2-7 to reach $2.083, while October slid 11 cents to $2.099.

Meanwhile, weather forecasts appeared to be offering bulls some glimmer of hope for another rally or two before the shoulder season gets under way. Weather models throughout much of the week have been increasing heat in long-range outlooks.

The overall weather picture was slightly hotter again Thursday, with some minor hotter changes to early next week in the eastern half of the nation, according to Bespoke Weather Services. The southern United States, especially Texas, remains the focal point for heat over the next week or so, with above-normal temperatures then spreading back into the Midwest and East beyond the middle of the month.

This would make the 11- to 15-day time frame hottest in terms of overall demand versus normal on the national level, the forecaster said. The 15-day forecast gas-weighted degree day (GWDD) total is now even with the total from the same dates last year, “and it is looking more likely that the total weather demand for this August will be close to what we saw in August 2018, which was a notably hotter-than-normal month,” according to Bespoke.

“Ever since the cooling back in June, hotter than normal has been the theme as El NiÃ±o faded. Regional details have varied, but demand has tended to stay above normal,’ Bespoke chief meteorologist Brian Lovern said.

The increasingly warm outlook has market bulls hoping to stall the string of above-average storage injections the market has seen most of this summer. On Thursday, the Energy Information Administration (EIA) reported yet another above-average injection of 55 Bcf for the week ending Aug. 2.

Although the reported build was on the low end of expectations and came in 4 Bcf below consensus, it was still higher than last year’s 46 Bcf injection and the 43 Bcf five-year average. The surplus to stocks at this time last year rose to 343 Bcf while the deficit to the five-year average shrunk to 111 Bcf.

Analysts struggled to call the report “bullish” even though it came in slightly below expectations, but traders nevertheless moved prices higher after the print hit the screen.

“Market is so bottomed out it is behaving semi bullish,” said natural gas coordinator Donnie Sharp of Huntsville Utilities just after the report was released. “As much due to being oversold as anything. At a whopping $2.13.”

With LNG demand expected to remain depressed for a few more weeks, analysts on energy chat room Enelyst searched for other signs of optimism for prices. Flux Paradox President Gabriel Harris noted the continued decline in the rig count, with rigs now down to levels not seen since January 2018 and 14% below the peak at the start of this year.

“At some point, that is going to support a good buy opportunity,” Harris said.

For now, though, weather appears to be the only tangible lifeline for prices, as cooling demand is clearly key to storage behavior. The 55 Bcf injection confirms the idea that the record cool temperatures in the South a couple of weeks ago led to last week’s big bearish surprise, as most estimates were too high on the build in the South-Central region for Thursday’s report, according to Bespoke.

“Balance-wise, yes, tighter than last week, but still underwhelming in our view. All in all, a neutral report,” Lovern said.

Broken down by region, the South Central injected a net 7 Bcf, which took into account a 5 Bcf draw from salt facilities, according to EIA. The Midwest added 24 Bcf into stocks, while the East injected 16 Bcf. Inventories in the Mountain region rose by 5 Bcf, while the Pacific increased by 2 Bcf.

Looking ahead, with shoulder season around the corner, and Kinder Morgan Inc.’s Gulf Coast Express (GCX) expected to enter service next month, releasing even more associated gas into the market, analysts see more downside risk ahead for prices.

“The 2.0 Bcf/d Gulf Coast Express is set to untether Permian supplies by Sept. 20, if not earlier,” EBW said. “An estimated 0.5-1.0 Bcf/d of gas is currently flared in the Permian; this may quickly make its way to the Gulf Coast to add to an oversupplied market. In addition, a wave of new oil pipelines may lead producers to complete and turn in-line wells to reinvigorate production, carrying associated gas totals still higher.”

On the latter, Plains All-American CEO Willie Chiang said the Permian-to-Gulf Coast Cactus II oil pipeline is mechanically complete from Wink in West Texas to Ingleside, which is near Corpus Christi in South Texas. “As of today, the line is approximately 50% filled with crude, and we anticipate entering initial commercial service sometime next week. We expect to have direct Cactus II connectivity to Corpus in service by the end of 1Q2020.”

At the same time, Appalachian producer earnings calls illustrate that production grew faster than expected and further production is expected in 2H2019 despite drastic cuts to capital expenditure budgets, according to EBW.

Permian Basin pricing, like it often has over the last several months, got hammered again during the Aug. 2-7 period despite strong Texas demand and anticipation of GCX’s in-service.

Surging production was behind the dramatic losses seen across West Texas.

To date, production this month has been outperforming expectations, according to Genscape Inc. The firm’s August projection for Lower 48 production was 90.43 Bcf/d, but its daily scrape model is already running nearly 0.37 Bcf/d higher and has run as high as 91.55 Bcf/d.

“Production may be even higher than what our daily model is suggesting as storage injections continue to come in higher than our supply and demand projections on average,” Genscape senior natural gas analyst Rick Margolin said.

Over in South Texas, the ongoing dispute between Mexico’s ComisiÃ³n Federal de Electricidad (CFE) and four natural gas pipeline developers, including TC Energy, which is waiting for CFE approval to start flows on its Sur de Texas-Tuxpan pipeline, continued to weigh on prices.

Earlier this week, TC Energy management indicated that pipeline arbitration with Mexico over three pipelines in the country could continue on until 2021 if a solution is not found before legal proceedings begin.

Over in California, another split is developing between the California Independent System Operator (CAISO) and the California Public Utility Commission (CPUC) regarding the retirement of gas-fired plants. During the past year, pressure from environmentalists and state and local officials to retire gas-fired plants has been mounting.

In comments filed by the CPUC, however, CAISO has urged the CPUC to consider immediately extending the retirement dates for 3,527 older gas-fired plants along the California coast currently slated for retirement in 2020. The CAISO also urged the CPUC to develop a comprehensive plan for dealing with reliability issues in 2022 and beyond as state-mandated renewable targets continued to increase.

In comments submitted to the CPUC, CAISO warned that existing battery resources are not yet performing their expected role of shifting electricity generated while the sun is shining to early evening hours. Instead, operators prefer to provide frequency regulation services during the day, in order to avoid potential degradation from repeatedly fully charging and discharging every day.

“During the summer, solar generation drops off just as people are getting home from work and cranking up the air conditioning and turning on their TVs,” BTU analyst Connor McLean said.

In the winter, the peak is even later in the day. Despite significant solar generation during the middle of the day, load must be met with other sources, such as natural gas, during peak load hours, McLean said. Similarly, the minimum load hours (the hour of each day with the smallest generation) tend to occur early in the morning when solar is also unavailable.

As for near-term gas prices, the expected slide in demand during the approaching shoulder season hit the market hard. SoCal Citygate September dropped 15 cents from Aug. 2-7 to reach $2.651, while the balance of summer fell 18 cents to $2.45, according to Forward Look. The winter strip was down 14 cents to $3.40, and next summer was down a dime to $2.63.