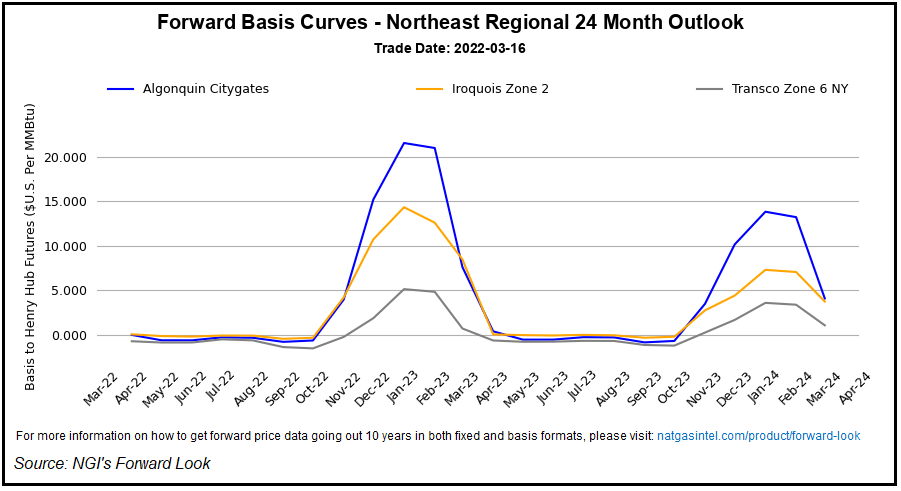 Week/week gains of around 10-25 cents characterized price action at most Lower 48 hubs, paced by a 22.2-cent gain for fixed price April trading at benchmark Henry Hub, where prices ended the period at $4.749/MMBtu.

In New England, Algonquin Citygates front-month basis eased 18.0 cents lower week/week to plus-0.6 cents. Along the West Coast, Northwest Sumas basis slid to minus-61.1 cents, a 12.4-cent swing, while SoCal Citygate April basis saw a 16.5-cent discount for the period, ending at minus-32.4 cents.

Nymex futures were up-and-down during the March 10-16 period, but momentum shifted in favor of the bulls on Wednesday, with the April contract posting an 18.0-cent rally. That momentum continued into Thursday’s session, when the front month tacked on another 24.2 cents to settle shy of the $5 mark at $4.990.

NatGasWeather on Thursday attributed the recent gains in the futures market to a combination of stronger weather-driven demand expectations for the United States around March 26-28, a bullish government inventory report, a 2 Bcf/d week/week drop in production and “continued global uncertainty” surrounding events in Ukraine.

“We expect strong volatility” to close out the work week “as major players position for another dangerous weekend to hold, especially due to great uncertainty on where the Russian invasion of Ukraine goes next,” NatGasWeather said. “What also will be important is whether global Covid-19 lockdowns ease after increasing this past week.

“…We continue to give bulls the edge ever since they were able to again rally prices sharply from $4.50.”

The Energy Information Administration (EIA) on Thursday reported a 79 Bcf withdrawal from U.S. natural gas stocks during the week ended March 11, a print that landed on the bullish side of consensus.

The latest EIA report left Bespoke Weather Services to wonder about what lies ahead for the natural gas market as it looks to refill stockpiles this summer.

“While still easily looser than last week in terms of supply/demand balances,” the 79 Bcf pull puts the inventories on track for an end-of-injection figure below 1,400 Tcf, “especially with production still struggling to get back over 93 Bcf/d,” Bespoke said.

Continued “tighter-than-expected” conditions in the market only serve to raise concerns over the “difficulty in refilling storage to a comfortable level this summer,” the firm added. “That has been a mainstay in our ideas here, though even we felt we’d see more out of production than we are seeing. Perhaps that comes into April, but our concerns for later this year will remain given our lean toward a hotter summer.”

EBW Analytics Group during the week said its projections pointed to a 240 Bcf inventory deficit versus the five-year average by the end of April.

This would likely help to “firm up support and avoid picking up significant price-sensitive demand via coal-to-gas switching that would further slow the storage refill pace,” EBW senior analyst Eli Rubin said in a note to clients.

As demand for injections from local distribution companies picks up in mid-April, this could help establish a “seasonal low” for Nymex prices, according to the analyst.

“The increasing price-inelastic, physical market demand” from these companies “could help stabilize the market at an elevated level as significant storage deficits remain,” Rubin said.

The most recent round of European sanctions on Russia as of Wednesday “still steers clear of the jugular: oil and gas purchases,” Rystad Energy senior analyst Kaushal Ramesh said in a research note.

The analyst noted “muted” price action for the Dutch Title Transfer Facility (TTF) to open the week’s trading, with the benchmark showing signs of being “temporarily consolidated” around $36-40/MMBtu.

Ramesh said TTF prices were expected to see a “cautious downward skew in the absence of escalatory developments in the war in Ukraine.” Still, the analyst cautioned that “the geopolitical risk premium on prices may soon reappear if the optimistic expectations on negotiations in Ukraine don’t materialize.”

News on the situation in Ukraine and associated risks for spiking oil prices could continue to influence Nymex Henry Hub futures, EBW’s Rubin told clients earlier in the week.

“Ukraine headlines — and potential for a renewed spike in oil prices — can rapidly swing market sentiment,” Rubin said. “…If prices surge higher again at any point over the next 30-45 days, a potential repeat of surging capital inflows to the energy sector could carry Nymex futures higher.”