The U.S. natural gas rig count fell one unit to 104 for the week ended Friday (Dec. 17), while an expansion in the oil patch lifted the overall domestic count three units to 579, according to updated figures published by oilfield services provider Baker Hughes Co. (BKR). 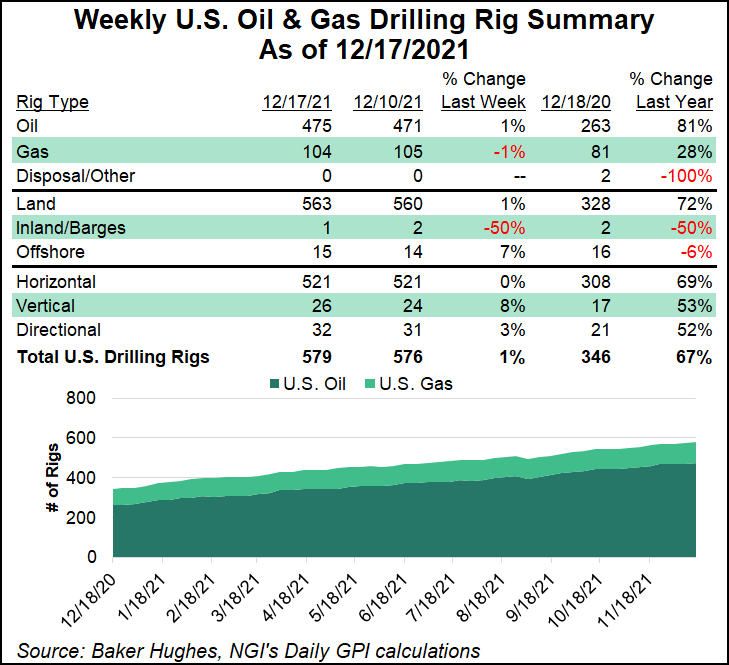 Four oil-directed rigs were added for the week in the United States, partially offset by the one-rig decline in natural gas-directed drilling. Three rigs were added on land and one in the Gulf of Mexico, with one rig exiting from inland waters.

The combined U.S. count finished the week 233 rigs ahead of its year-earlier tally of 346, according to the BKR numbers, which are partly based on data from Enverus.

The Canadian rig count, meanwhile, tumbled 10 units week/week to end at 167, still outpacing its year-ago total by 65 units. Changes there included declines of six oil-directed rigs and five gas-directed, partially offset by the addition of one miscellaneous unit.

Broken down by major basin, the Permian added two rigs for the week, raising its total to 288, versus 174 a year ago. The Haynesville added a rig to reach 47 units overall, up from 40 in the year-earlier period. Elsewhere among plays, the Ardmore Woodford added a rig week/week, while the Marcellus Shale dropped one rig.

In the state-by-state count, Texas added three rigs for the week, with Oklahoma adding two. Pennsylvania and Louisiana each added one rig to their respective totals. West Virginia dropped two rigs week/week, while California and New Mexico each saw declines of one rig for the period.

The Permian and the Haynesville are expected to drive growth in onshore natural gas production into the new year, according to updated projections released earlier in the week by the Energy Information Administration (EIA).