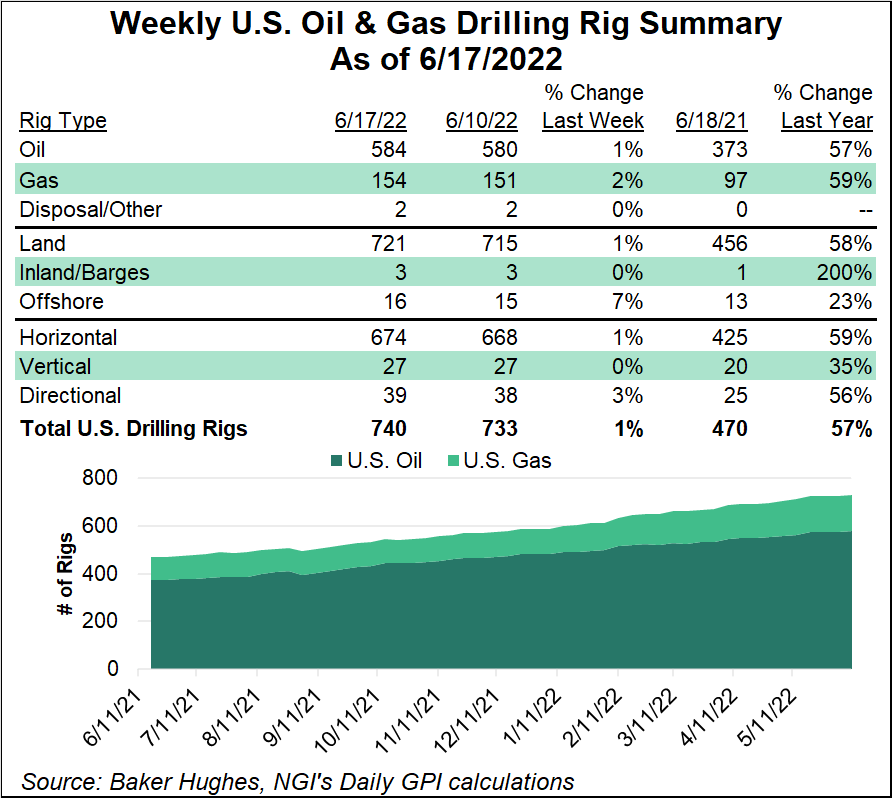 Four oil-directed rigs were added alongside the three natural gas-directed rigs in the United States for the week, putting the combined domestic count 270 units ahead of its year-earlier total of 470.

Six rigs were added on land, while the Gulf of Mexico count increased by one to end at 15 for the period. Domestic drilling gains included six horizontal rigs and one directional rig, according to the BKR numbers, which are partly based on data from Enverus.

The Canadian rig count, meanwhile, rose 15 units to end the week at 156, up from 117 in the year-ago period. Gains there included 10 oil-directed rigs and five natural gas-directed units.

The combined North American rig count ended at 896 as of Friday, up 22 week/week and up from 587 in the year-earlier period.

Broken down by major play, the Cana Woodford led with an increase of two rigs for the period, while the Ardmore Woodford, Eagle Ford Shale and Haynesville Shale each added one rig week/week. The Granite Wash posted a one-rig decline to exit the week with one active rig.

In its latest state-by-state count, meanwhile, BKR recorded a seven-rig increase in New Mexico. That pushed the state’s total to 110, up from 75 in the year-earlier period, according to the BKR data.

Domestic crude output ticked higher in the week-earlier period, according to the latest Energy Information Administration (EIA) data. The agency said output climbed to 12.0 million b/d for the week ended June 10, up 100,000 b/d week/week. It marked the first increase in five weeks after modest bumps earlier this year.