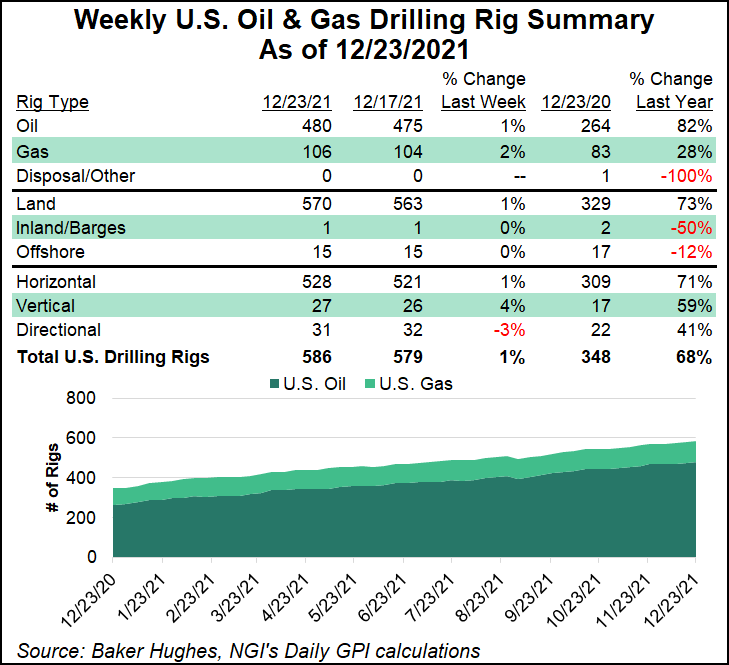 Including a five-rig increase in the domestic oil count, the combined U.S. rig count surged seven units higher to finish at 586, outpacing the year-earlier total by 238 units.

Land drilling increased by seven, while the Gulf of Mexico held flat at 15 rigs for the period, down from 17 a year ago. Seven horizontal units were added, along with one vertical rig. Partially offsetting was a decline of one directional unit, according to the BKR numbers, which are partly based on data from Enverus.

The Canadian rig count pulled back sharply for the period, down 34 rigs week/week to 133. Declines included 20 oil, 13 natural gas and one miscellaneous rig. The Canadian count remained well ahead of the 82 rigs running in the year-ago period.

Broken down by major region, the Permian Basin led the way with six rigs added for the period, raising its total to 294, up from 173 at the same time last year. The Cana Woodford added two rigs for the week, while the Haynesville Shale added one.

In terms of state-by-state counts, Texas and New Mexico each posted net gains of four rigs week/week. Louisiana, meanwhile, saw a net decline of one rig for the period, the BKR data show.

According to the latest round of Energy Information Administration (EIA) inventory data, Americans pulled back on distillate fuel, gasoline and jet fuel consumption in the week-earlier period as spread of the Omicron variant of the coronavirus accelerated.

“Much uncertainty remains regarding the impact of the Omicron variant on mobility, demand and oil prices,” analysts at ClearView Energy Partners LLC said.

Raymond James Inc. chief economist Scott Brown said the new variant would inevitably create enough trepidation to cause travel and economic interruptions, affecting energy demand. However, because a majority of Americans are vaccinated, he does not expect government imposed lockdowns that would cause lasting impacts.

Omicron “is likely to be a near-term constraint on growth, but a temporary one, as we saw with the Delta variant,” Brown said.