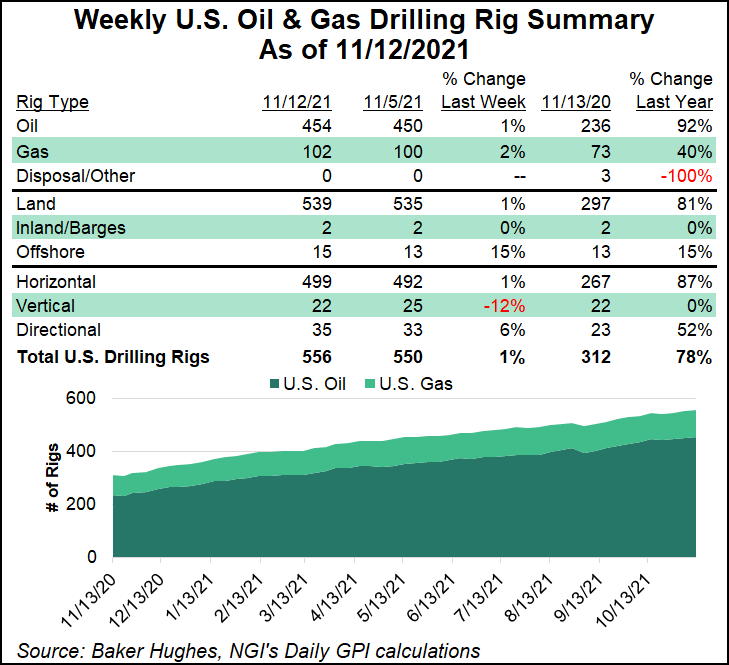 Four oil-directed rigs were also added in the United States for the week, lifting the overall domestic tally six units to 556, 244 rigs ahead of year-ago totals. Four rigs were added on land, with two added in the Gulf of Mexico, according to the BKR numbers, which are partly based on data from Enverus.

Broken down by major play, the Cana Woodford and Utica Shale each posted net increases of two rigs week/week, while the Ardmore Woodford dropped two rigs to fall to zero overall. The Barnett and Eagle Ford shales, and the Permian Basin, each added one rig to their respective totals.

In the state-by-state breakdown, Texas saw a 10-rig jump in its count for the week, reaching 264 rigs, versus 145 at this time last year. New Mexico, meanwhile, recorded a five-rig decline in the latest BKR count.

Elsewhere among states, Ohio added two rigs for the period, while Louisiana added one. One rig exited West Virginia for the week, according to BKR.

According to the most recent inventory data from the Energy Information Administration (EIA), domestic oil stocks increased for a third straight week as producers held output at elevated levels – at least by 2021 standards — while high prices curbed gasoline and jet fuel demand.

The EIA said Wednesday crude inventories for the week ended Nov. 5, excluding those in the Strategic Petroleum Reserve, increased by 1.0 million bbl from the previous week. In the final two weeks of October, supplies increased by 7.6 million bbl.

Production in the week-earlier period held steady at 11.5 million b/d. That was up from 11.3 million b/d for the week ended Oct. 22 and well above the 10.5 million b/d level of a year earlier, according to EIA.