An uptick in natural gas-directed drilling activity, including in the Marcellus and Haynesville shales, lifted the combined U.S. rig count three units overall to 604 for the week ended Friday (Jan. 21), according to the latest tally from oilfield services provider Baker Hughes Co. (BKR). 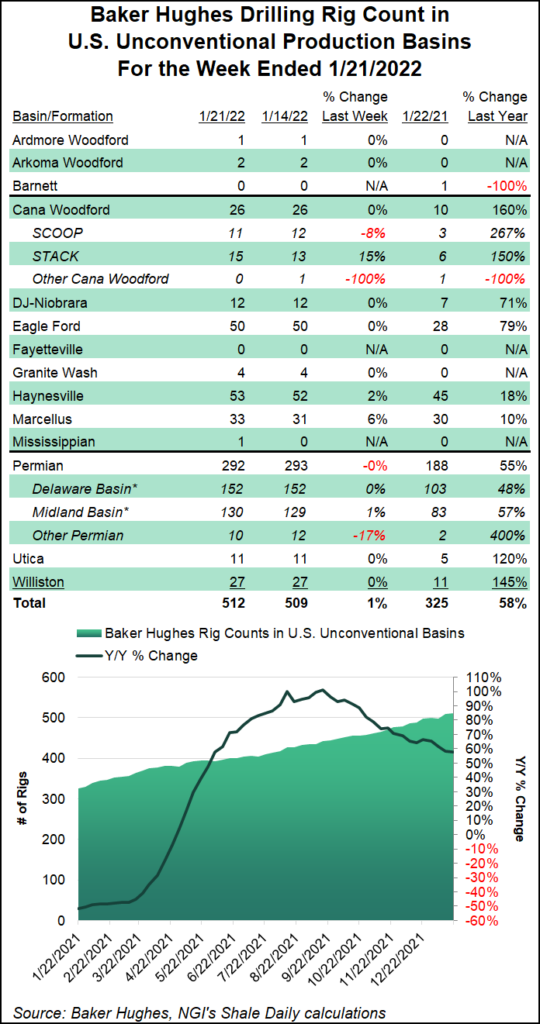 A four-rig increase in natural gas-directed drilling offset a one-rig decline in oil-directed drilling in the United States for the period. The combined U.S. count finished the week 226 units ahead of its year-ago tally of 378, according to the BKR numbers, which are partly based on data from Enverus.

Domestic land drilling increased by three units for the period, while the Gulf of Mexico count went unchanged at 18. Two directional rigs and three horizontal rigs were added, partially offset by a two-rig decline in vertical drilling.

The Canadian rig count jumped 21 units higher to 212 for the week, up from 172 rigs in the year-earlier period. Gains there included 13 oil-directed units and eight natural gas-directed rigs.

Broken down by major basin, the Marcellus posted the largest increase for the period at two rigs, growing its total to 33, up from 30 a year ago. The Haynesville and the Mississippian Lime each added one rig during the week, while the Permian Basin saw a one-rig decline week/week.

In the state-by-state counts, Pennsylvania picked up two rigs for the period, while Louisiana, Oklahoma and Utah each added one to their respective totals. Texas and Wyoming each posted one-rig declines, according to the BKR data.

Forecasters have maintained bullish expectations for global oil demand in the year ahead while eyeing potential supply challenges, despite risks presented by the Omicron variant of the coronavirus.

The International Energy Agency said earlier in the week that the global economy, while briefly dinged late in 2021 and early this year by Omicron, is weathering the latest virus storm far more nimbly than previous iterations of the pandemic. The global energy watchdog said oil demand would climb throughout most of 2022 as a result.

That followed the latest monthly outlook from Organization of the Petroleum Exporting Countries (OPEC), in which the cartel said it expects strong crude consumption growth in 2022, despite Omicron. OPEC researchers predicted global demand would rise by 4.15 million b/d and that consumption would exceed 100 million b/d in the third quarter, returning demand to pre-pandemic levels.