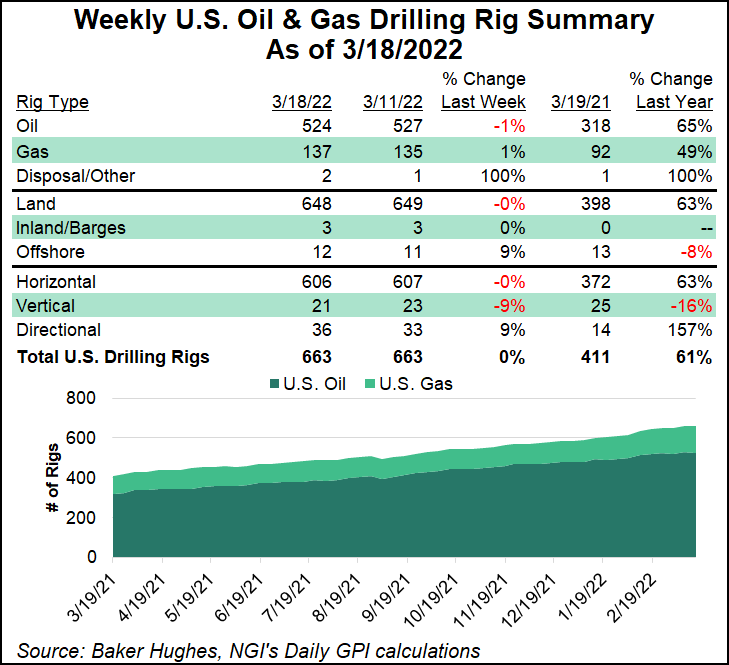 One miscellaneous unit was also added in the United States for the week, helping to offset a decline of three oil-directed rigs. The combined U.S. rig count finished unchanged at 663 as of Friday, versus 411 rigs running in the year-earlier period, according to the BKR numbers, which are based partly on data from Enverus.

Land drilling declined by one rig overall in the United States, while the Gulf of Mexico added one rig to raise its total to 12. Three directional rigs were added domestically, offsetting declines of two vertical rigs and one horizontal unit.

The Canadian rig count declined 30 units week/week to fall to 176, up from 92 in the year-earlier period. Changes there included declines of 24 oil-directed rigs and six natural gas-directed units.

Among major drilling regions, the Haynesville and the Ardmore Woodford each added one rig during the period, while the Eagle Ford Shale and the Williston Basin each posted net declines of one rig week/week.

Counting by state, BKR recorded a two-rig increase in Louisiana, with one-rig declines in New Mexico, North Dakota and Pennsylvania.

Despite calls for increased output amid Russia’s invasion of Ukraine and threats to global supplies, U.S. crude exploration and production (E&P) companies have not moved an inch. Production was flat in the week-earlier period, extending a long-running trend, the Energy Information Administration (EIA) said in its latest Weekly Petroleum Status Report.

Production for the week ended March 11 held firm at 11.6 million b/d, EIA’s latest data showed. That was flat with the prior week and with all of February.

This comes as executives from three leading onshore producers, speaking at the CERAWeek event in Houston, said it will take more than $100/bbl oil and an energy crisis in Europe for Lower 48 E&P firms to substantially raise production.