Prices of North American natural gas continued to soften this week with U.S. storage levels set to build healthily for the upcoming winter. 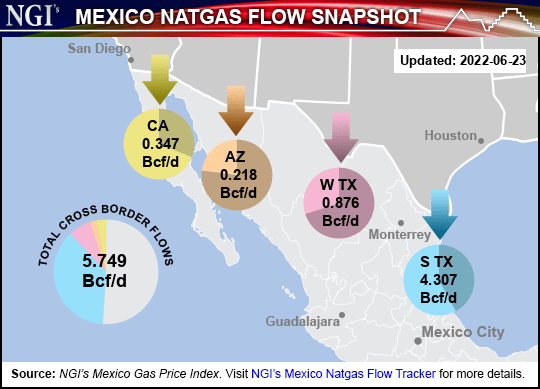 After recently barreling toward $10/MMBtu, the 2 Bcf/d available to the North American market following the Freeport liquefied natural gas (LNG) terminal shutdown in Texas, is loosening supply and bringing down prices. The July New York Mercantile Exchange gas futures contract settled at $6.858 on Wednesday, up 5.0 cents on the day. August futures climbed 8.9 cents to $6.872.

Mexico imported 5.75 Bcf of natural gas via pipeline from the United States on Thursday, and the 10-day average was 5.81 Bcf/d, according to NGI calculations.

Regulatory uncertainty, meanwhile, continued to cloud the Mexico market. With transport contracts on the Sistrangas pipeline network set to be renegotiated before the end of the month, it’s still unclear what impact if any a document issued by Energy Ministry Sener might have on the market.

The document stated that Sistrangas users would have to source their supply from state companies Petróleos Mexicanos (Pemex) or Comisión Federal de Electricidad (CFE).

Officials from Sistrangas operator Cenagas have hinted in recent days that the requirement could be fulfilled either by purchasing gas from a state company or by leasing capacity from CFE or Pemex.

“Obviously, it’s bad that you need this for a transportation contract, but it’s not as bad as we were thinking,” Gadex consultant Eduardo Prud’homme told NGI’s Mexico GPI. “It’s very important that everything is clarified. Cenagas says new contracts will not be impacted, but new contracts haven’t been signed. So we will see soon.”

A gas buyer in Mexico City said the proposed changes would “favor CFE over all other companies, including Pemex.” Still, at this stage, “it’s all just gossip,” he said.

Last August, CFE said it had signed a memorandum of understanding with TC Energy Corp. to develop the expansion project.

Sener has also filed paperwork for an indigenous consultation in Oaxaca for the 320 MMcf/d Jaltipán-Salina Cruz pipeline. The pipeline would cross the Isthmus of Tehuantepec, the narrowest strip of land in Mexico, between the two coasts.

The corridor project would link the deepwater ports of Coatzacoalcos and Salina Cruz on either side of the 77-mile isthmus. It also could include an LNG export facility proposed for Salina Cruz.

Mexico’s Sistrangas five-day line pack average fell again this week, hitting 6.478 Bcf on Wednesday (June 22). The line pack is below the optimal range of 6.86-7.29 Bcf needed to guarantee sufficient pressure in the system. Line pack has been a persistent problem all year on the Sistrangas.

Demand on the Sistrangas on Wednesday was 4.633 Bcf, up from 4.601 Bcf a day earlier. Mexico gas production fed into the system was 1.275 Bcf. Southeast production dominated the total, with 709 MMcf from the region injected into the pipeline system.

In Mexico, NGI natural gas cash prices continued their downward spiral this week. On Wednesday, Los Ramones fell 7.0 cents day/day to $6.707. Monterrey via the Mier-Monterrey system fell by 7.0 cents to $6.483.

The South Central region saw nonsalt facilities post a 16 Bcf increase in stocks, while salts posted a 3 Bcf withdrawal, according to EIA. Until Mexico develops storage capability, this is the storage system most readily available to the country.