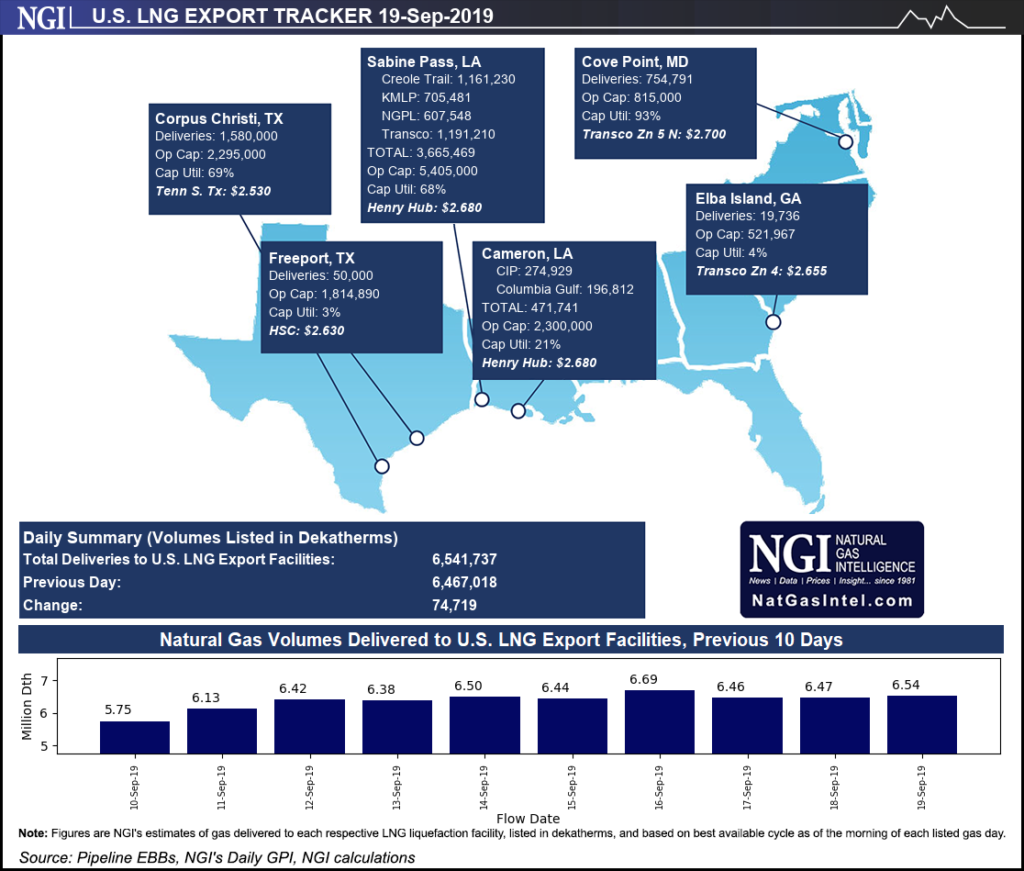 Prices were a nickel higher on average through the upcoming winter, but next summer moved a penny lower, according to NGI’s Forward Look.

After four straight weeks of stout increases, there appeared to be no stopping natural gas prices, which saw a runup of more than 50 cents at the front of the Nymex futures curve over the past three weeks. But Tuesday’s cash decline was just enough to awaken bears that had been relegated to the sidelines, with the Nymex October contract finishing about a penny lower day/day.

On Wednesday, traders sent futures down another few ticks as storage expectations clustered around a near-normal injection. The selling followed a “long liquidation pattern,” possibly from traders “who bought it on Monday thinking it was going to go higher,” according to INTL FCStone Financial Inc. Senior Vice President Tom Saal.

Saal noted that prices bounced after dropping to around $2.600, signaling support at that level.

“If it was going to fall down and head straight south again, I think it would have kept going lower,” he told NGI.

However, Thursday’s larger-than-expected storage injection took out the $2.600 level of support, and then some, as traders digested the bearish data that came in spite widespread heat during the reference week.

The Energy Information Administration (EIA) reported an 84 Bcf injection into storage stocks for the week ending Sept. 13. The build was on par with last year’s 84 Bcf build and was slightly higher than the five-year average 82 Bcf injection.

“Any number in the ballpark of 84 Bcf is bearish in terms of balances given how hot the pattern was” and given lower production and rebounding LNG feed gas volumes during the period, according to Bespoke Weather Services.

By region, the Midwest posted the largest weekly injection at 34 Bcf, while the East added 24 Bcf. The Mountain region injected 5 Bcf, and the Pacific injected 4 Bcf. In the South Central, 15 Bcf was injected into nonsalt stocks, along with 1 Bcf into salt, according to EIA.

Market observers on Enelyst looked to a higher-than-expected build in the South Central region as a possible driver of the bearish miss. However, they also noted that injections into salt stocks the past two weeks have lagged the five-year average.

“Are the cash-to-winter spreads not enough to get the salt operator/contract holders moving?” , Enelyst managing director Het Shah said.

Nymex futures responded swiftly to the latest storage data, dropping as low as $2.555 in the half-hour after the 10:30 a.m. ET report. “Prices have responded accordingly, but with injections only projected to get larger, the decline may not be finished yet, with $2.50 looking likely soon.”

A pullback in prices was inevitable as the warmer anomalies turned bearish in long-range weather forecasts. By early October, anomalies 7 degrees above normal across large portions of the Upper Midwest and Northeast will limit early-season heating demand more than adding to late-season cooling demand, according to EBW Analytics Group.

Furthermore, the potential for storm systems to develop and come inland should not be discounted, the firm said. Tropical Storm Imelda very quickly proved that theory as the storm made landfall in Freeport, TX, on Tuesday shortly after forming in the Gulf of Mexico.

More than a foot of water was expected to saturate Southeast Texas through Thursday, and some areas could see more than 40 inches during that time, slicing into demand as the downpour lowers temperatures. Highs that had been in the low 90s on Monday stalled in the low 80s for Wednesday and Thursday. Daytime temperatures in the 90s were back in the forecast by the weekend, however.

“Tropical storms often appear without significant prior advance warning and can reshape weather-driven risks,” EBW said. “ Additional storms in the next several weeks should not be discounted— and may pose risks to LNG exports as well.”

A warm October forecast may give bears some staying power. Current forecasts point to a 20 gas-heating degree day (GHDD) year/year decline in October and a 114 GHDD year/year decline in November, “likely spelling softness ahead for Nymex futures if current outlooks hold,” EBW said.

Forward prices across most of the country rose in line with Nymex futures. Gains of a nickel or so were seen through the upcoming winter, but a minor pullback was seen in the summer and some winter 2020-2021 strips.

The Southern California market was the exception, however, amid a return to more seasonal temperatures due to storms moving into the state. The West was forecast to see high temperatures mostly reach the 60s and 70s for the next several days, with lows in the 30s and 40s, according to NatGasWeather.

Interestingly, the front of the curve saw the least action. SoCal Citygate October prices slipped just a penny between Sept. 13 and 18 to reach $3.342, but November plunged 14 cents to $3.444, according to Forward Look. The winter strip (November-March) fell 13 cents to $4.14, while next summer dropped 4 cents to $2.73.

Farther north, PG&E Citygate forward prices barely budged across the curve, picking up only a penny in the nearby months and coming in flat for the winter.

Prices in South Texas got a boost now that the Sur de Texas-Tuxpan pipeline is in service south of the border in Mexico. NGPL S. TX October prices jumped 11 cents from Sept. 13-18 to reach $2.468.

Despite the Sur de Texas-Tuxpan in-service, a force majeure on the Valley Crossing pipeline (VCP) in South Texas could affect exports to the marine pipeline. VCP posted a notice on Wednesday that it experienced a mechanical failure of one unit in its Agua Dulce compressor station. “Based on current nominations, VCP does not anticipate any impact to transportation of natural gas on the pipeline but may impede transportation of natural gas on the pipeline dependent upon future demand at deliveries on the Nueces Header and into the Brownsville Pipeline.”

With Sur de Texas-Tuxpan formally entering commercial operations on Tuesday, VCP has been delivering an average 498 MMcf/d to the new Mexican line, according to Genscape Inc. The firm, however, expects flows on Sur de Texas will actually be smaller through the end of the month in order for Mexico to accommodate already-contracted LNG cargoes. Sustained higher flows are not expected until October.

Meanwhile, Nautilus Pipeline Co. has kicked off its planned fall maintenance, shutting in production at its SS207 platform in the Gulf of Mexico. Production receipts at the SS207 platform are at zero after having averaged 363 MMcf/d this month-to-date, Genscape said.