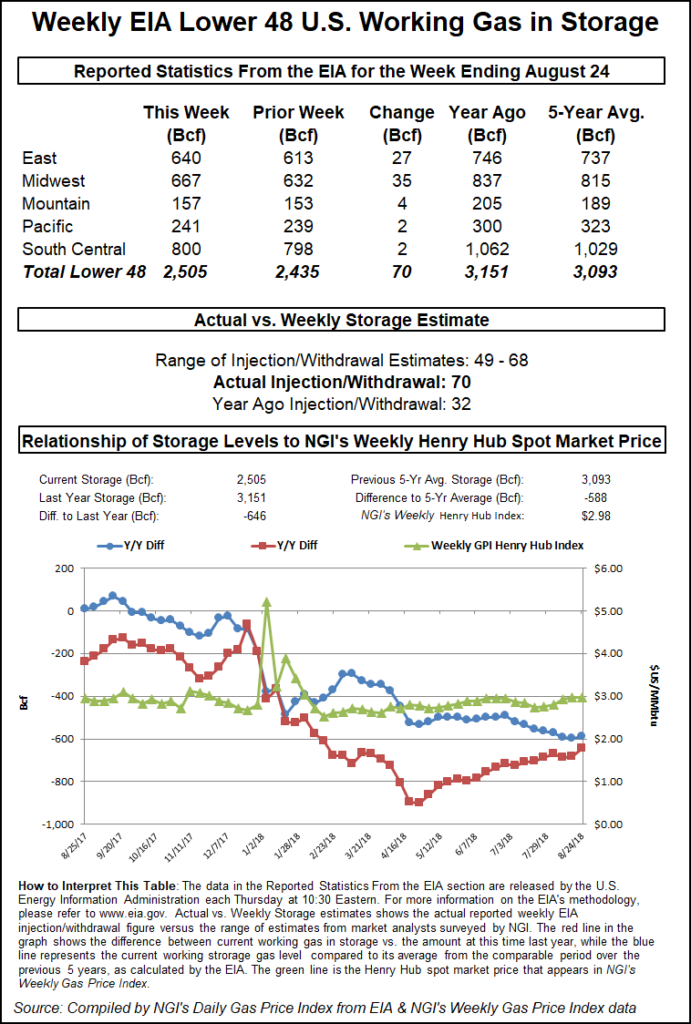 In the spot market, points in California and the Desert Southwest posted discounts after seeing gains earlier in the week; the NGI Spot Gas National Avg. finished at $2.155, off 3.5 cents.

Once the dust cleared, the natural gas market came out of Thursday’s trading “basically unchanged,” with gains further along the strip offsetting the discount in the prompt month, according to Bespoke Weather Services.

“There was some selling right after” the Energy Information Administration (EIA) released its weekly storage report, which came in above consensus, Bespoke said. But the report “was still pretty neutral overall, not moving the end-of-season storage projections materially.

“…The market is being led mostly by cash prices rather than day to day balance data changes, and that may continue for a while,” the forecaster said. “Along those lines, we still have plenty of mid-summer-like heat in the South for another week, including in Texas, which could keep cash supported with higher demand as salts try to fill storage, but we do introduce higher wind into the equation early next week, which could reduce gas burns enough to allow cash prices to be a little weaker.”

The EIA reported an 84 Bcf weekly injection into U.S. natural gas stocks Thursday, on the high side of expectations. The 84 Bcf build, recorded for the week ended Aug. 30, also comes in higher than both the 64 Bcf injection recorded last year and the five-year average build of 66 Bcf.

In the half hour after the figure crossed trading screens at 10:30 a.m. ET, the October Nymex futures contract fell from around $2.430/MMBtu down to as low as $2.388. By lunchtime on the East Coast, the front month recovered to above $2.460 before going on to settle near the middle of the day’s trading range.

Prior to Thursday’s EIA report, estimates had been pointing to a build in the upper 70s to low 80s Bcf. Surveys from Bloomberg and Reuters had both landed on a 78 Bcf injection, with expectations ranging from 67 Bcf to 90 Bcf. Intercontinental Exchange EIA Financial Weekly Index futures settled at 76 Bcf. NGI’s model predicted an 80 Bcf injection.

By region, EIA recorded a 37 Bcf injection in the Midwest and a 32 Bcf build in the East for the week. The Mountain region refilled 4 Bcf, while the Pacific saw a net pull of 2 Bcf. In the South Central, a 13 Bcf injection into non-salt stocks was partially offset by a 2 Bcf withdrawal from salt, according to EIA.

Heading into Thursday’s session, the market was coming off a two-day rally that saw the front month surge from $2.285 as of last Friday (Aug. 30) to just shy of $2.450 as of Wednesday’s settle.

“From a fundamentals perspective, we can’t explain the current rally in the natural gas market, but it appears technicals may be partially responsible,” the TPH team said. “While we’re not technicians, those who are more honed in the practice tell us gas is testing, or breaking through, several technical indicators.

“…However, from a fundamentals perspective, things are decidedly less rosy. Production continues to outperform,” liquefied natural gas feed gas demand has fallen off somewhat and residential/commercial demand “is at its lowest level in a year.” This comes as the Sur de Texas-Tuxpan export pipeline into Mexico “is still only moving 0.7 Bcf/d. Ultimately, we’re believers in the fundamentals and expect gas will correct to the downside.”

“A pullback is likely soon,” according to EBW. “When, however, is more difficult to judge. Further, the recent run-up is likely to reset market sentiment; even when the retreat begins, prices are likely to remain higher than previously expected.”

Southern California and Desert Southwest spot prices retreated Thursday after surging earlier in the week. SoCal Citygate continued to trade above the $4 mark but gave back 43.0 cents on the day. SoCal Border Avg. finished at $3.185, off 58.5 cents.

The elevated prices in the region this week have coincided with hot temperatures and maintenance-related import constraints.

Genscape Inc. analyst Joe Bernardi noted that the SoCal Citygate prices this week are “relatively mild” in the context of the recent history of price spikes at the hub.

“SoCalGas has taken down its Line 4000 for planned maintenance that started Tuesday and is expected to last through Saturday,” Bernardi said. “With imports cut, on Tuesday the pipe posted withdrawals in excess of 700 MMcf/d, only the second time this has happened since April 1.

“The first such time was last week and required contributions from withdrawals at Aliso Canyon under the new withdrawal protocol; however, SoCalGas has not announced any withdrawals from Aliso over the last several days.”

Westcoast Energy Inc. notified shippers that southbound capacity through its Station 4B in British Columbia would drop from 1,427,723 GJ for Thursday’s gas day to 1,269,087 GJ for Friday.

Meanwhile, in the Southeast and Mid-Atlantic, prices were steady as Hurricane Dorian was expected to continue on a path up the East Coast over the next few days. Transco Zone 5 added 1.0 cent to $2.500.

As of around 4 p.m. ET Thursday, Dorian was “expected to continue its track along the southern Mid-Atlantic coast through Friday as the storm moves just offshore of South Carolina” through Thursday evening, then “over or just offshore of southeast North Carolina and the Outer Banks overnight through early Friday,” according to the National Weather Service (NWS).

“Dorian will remain a dangerous hurricane, with life-threatening storm surge, dangerous winds and a threat of tornadoes for coastal areas of South Carolina and North Carolina, and even portions of far southeast Virginia and the lower Chesapeake Bay” through early Friday.

As for temperatures, the NWS said the southern half of the country should expect generally warmer-than-average conditions heading into the weekend.

“Several fronts will push gradually cooler air and below-normal temperatures across the northern tier of states, including the Great Lakes and Northeast going into the weekend,” the NWS said. “Record highs with some triple-digit readings are possible on Friday along much of the Gulf Coast, with above-normal temperatures expected to remain in place here through the weekend.”

Spot prices were steady throughout the Gulf Coast and Texas Thursday. Houston Ship Channel picked up 3.0 cents to $2.420.