Natural gas crumbled for a third straight day as weather models continued to struggle in showing a return of colder weather later this month. News that a railroad strike was averted and that Freeport LNG further delayed its initial restart added bearish pressure to the market. 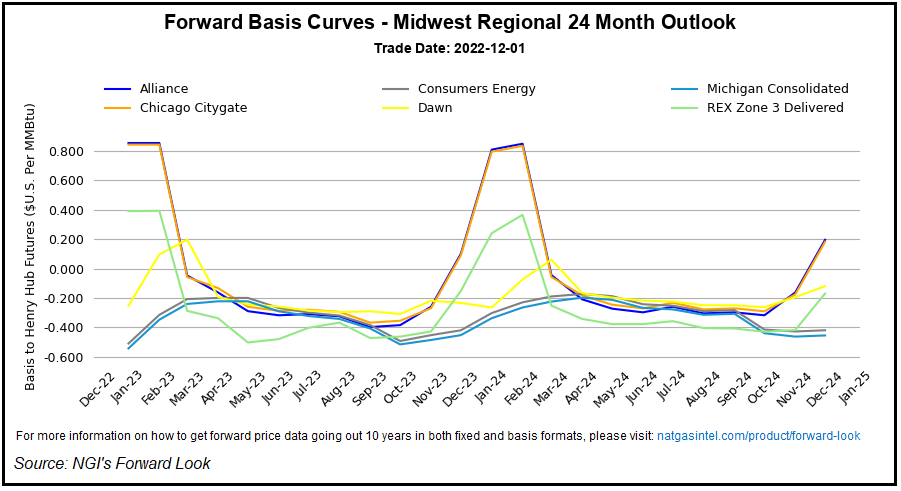 Spot gas prices plummeted alongside futures amid softening demand ahead of the weekend. NGI’s Spot Gas National Avg. fell $1.370 to $6.155.

Specifically, NatGasWeather said the model did not see nearly as much cold air over the Northern Plains advancing eastward. Although the data was still coming in when NatGasWeather issued a note to clients late Friday, it said the latest model run had already dropped a hefty 16 HDDs through Dec. 14.

“The longer it takes for sustained cold over the U.S. to arrive, the more pressure it puts on late-December and early-January patterns proving frosty if a strong weather-driven rally is to be expected,” the forecaster said.

The U.S. Energy Information Administration (EIA) on Thursday said stocks for the week ending Nov. 25 fell by 81 Bcf, 1 Bcf more than the prior week and far more than both year-earlier and five-year average declines. The drop sent storage inventories to 3,483 Bcf, which is 89 Bcf below last year and 86 Bcf below the five-year average.

The Schork Group noted that over the last two EIA reports, the 161 Bcf pull is 79 Bcf (96%) above the five-year average for the corresponding weeks and 63 Bcf (64%) above normal. Meanwhile, the deficit to the Schork model’s seasonally adjusted time series nearly tripled from minus 44 Bcf to minus 128 Bcf.

“Gas-fired space heating demand eased this week. Therefore, storage will receive a reprieve,” the Schork team said. “As the heating season now ramps up, the market will keep a close eye on the return of Freeport LNG exports.”

Freeport on Friday pushed back the start of initial operations to “around year end,” a slight delay from the mid-December time frame the company was targeting based on its latest update. This keeps around 2 Bcf/d of liquefied natural gas feed gas demand out of the market.

The company has received several key approvals from regulatory agencies that allow it to complete some critical repairs and begin reinstating some systems, according to spokesperson Heather Browne. The company still has to meet other necessary regulatory requirements.

Meanwhile, there is a “good chance for a significant cold event through the first half of this month,” according to Schork analysts. They noted that the National Oceanic Atmospheric Administration expects the North Atlantic Oscillation to track into deep negative territory. As such, frigid conditions are possible in the eastern part of the country, as well as in Northern Europe.

“If you are bearish gas (and power), you are going to have to dodge Mother Nature through at least the first half of this month,” Schork analysts said.

Not even the West Coast could escape tumbling spot gas prices on Friday. Widespread losses spread coast to coast as temperatures were set to warm and demand to slide.

In the Rockies, Transwestern San Juan cash plunged $4.760 day/day to average $6.055 for gas deliveries through Monday. A handful of locations in California also dropped more than $4.00 on the day.

Losses of more than $1.00 were common throughout the rest of the country amid the return to more seasonable weather in some areas and downright balmy weather in others. Henry Hub cash dropped $1.400 to average $4.815 for the three-day gas period.