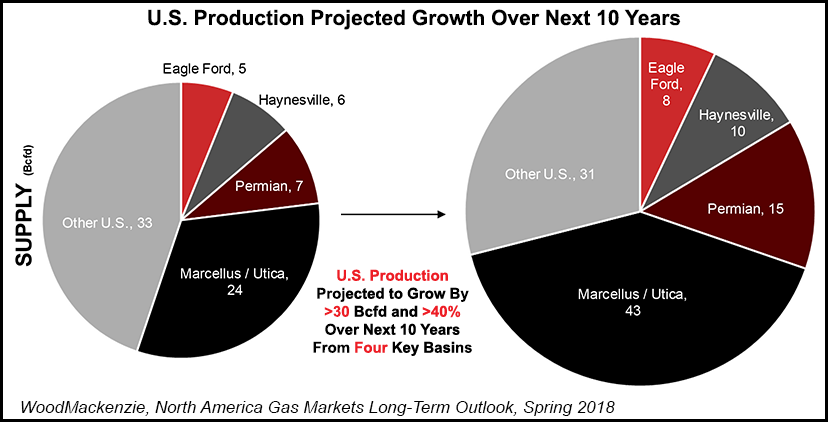 “The third quarter was a momentous one for our company,” KMI CEO Steve Kean said.

Current estimates show that the overall U.S. natural gas market will approach 90 Bcf/d for 2018, which is more than 10% growth versus 2017. “This is driving nice results on our large diameter pipes, where transport volumes are up 4 Bcf/d,” KMI President Kim Dang said Wednesday on a call to discuss quarterly earnings.

“Overall, the higher utilization of our systems, a lot of which came without the need to spend significant capital, resulted in nice bottom-line growth in the quarter and longer term will drive expansion opportunities as our pipes reach capacity,” Dang said.

With an eye on future development, KMI management said it expects natural gas infrastructure opportunities over the next decade will be partly driven by greater demand for gas-fired power generation across the country (expected to increase by 27%), liquefied natural gas (LNG) exports (expected to increase almost seven-fold), exports to Mexico (forecast to rise by 51%) and continued industrial development, particularly in the petrochemical industry.

Given the large concentration of projected demand in the South Central region, KMI continues to focus its major projects there. “Good progress” was made during the third quarter on the Gulf Coast Express (GCX) Project to move gas volumes from the Permian to the Texas coast, with the first nine miles of the Midland Lateral placed in service in August. Construction on the remaining 40 miles of the lateral began in September, with an expected in-service date of April 2019, management said.

The GCX Project remains on schedule for a full in-service date of October 2019. The $1.75 billion project is designed to transport 2 Bcf/d from the Permian to the Agua Dulce hub in South Texas; the project is fully subscribed under long-term, binding transportation agreements.

Meanwhile, KMI also began work on the 2 Bcf/d Permian Highway Pipeline (PHP) Project, which is also fully subscribed. “We have also already secured our pipe supply, which is a big mitigation of risk in the current trade environment,” Kean said.

The $2 billion PHP Project is designed to transport up to 2.0 Bcf/d through 430 miles of 42-inch diameter pipeline from the Waha hub in West Texas to the Texas Coast and potentially on to Mexico markets. The pipeline is expected to be in service in late 2020.

On the LNG front, KMI maintained that the first of 10 liquefaction units at its Elba Island LNG facility would be placed in service in 1Q2019, with the remaining nine units coming online throughout the remainder of the year.

Meanwhile, TGP has begun partial service on its Broad Run Expansion Project and expects to place the full 200,000 Dth/d project in service by the end of the month. This project and the Broad Run Flexibility Project, which is in service, would provide Antero Resources Corp. a total of 790,000 Dth/d of 15-year firm capacity from a receipt point on TGP’s existing Broad Run Lateral in West Virginia to delivery points in Mississippi and Louisiana.

Construction continues on the $240 million Southern Natural Gas Co. LLC Fairburn Expansion Project in Georgia. Work on the Fairburn Lateral is complete, and construction on the compressor station is nearing completion, management said. The 350,000 Dth/d project is expected to be placed in service in November.

Meanwhile, KMI management indicated that it is scuttling the proposed Utica Marcellus Texas Pipeline (UMTP) natural gas liquids project. Instead, the company plans to maintain natural gas service on that segment of the existing TGP pipeline, while developing a project to reverse its flow in order to take Appalachian gas south to the Gulf Coast, where the market is now growing. TGP is now actively pursuing commercial arrangements for those reversed flows.

The midstream company is well above plans in the first three quarters and now projects that it will exceed its financial targets for full year 2018.

As for Kinder Morgan Canada Ltd. (KML), Kean said that following the sale of Trans Mountain, the Canada-based unit is evaluating all options to maximize value to its shareholders. “The original purpose of KML was to hold a strong set of midstream assets and to use the cash flows from those assets and the balance sheet to provide a self-funding mechanism to the Trans Mountain expansion. Clearly, that purpose no longer exists.”

There are good options available for KML shareholders, which include continuing to operate the remaining midstream assets as a stand-alone enterprise, he said. “Simply put, we like the assets and we don’t have to sell them.” Among the other potential outcomes is a strategic combination with another company, including possibly KMI. The possibility that KML may enter into a strategic transaction, including an outright sale, means that KMI would have to decide on how to use the proceeds.

With its leverage target already met because of the Trans Mountain sale, “we would expect to use the additional available cash to fund the equity portion of attractive growth projects that we may add to the backlog or for share repurchases,” Kean said.

As for KML operations, construction of all major facilities at the Base Line Terminal in Edmonton is materially complete, with the final tanks placed in service in the third and early fourth quarters, which was slightly ahead of schedule. The 12-tank, 4.8 million bbl facility is fully contracted with long-term, firm take-or-pay agreements. The 50-50 joint venture crude oil merchant storage terminal is being developed by KML and Keyera Corp. and is expected to be completed under budget.