A subsidiary of National Fuel Gas Co. (NFG) has asked FERC for permission to place a key pipeline element of its $76.1 million West Side Expansion and Modernization Project [CP14-70] into service early in October, about three weeks before its official in-service date. 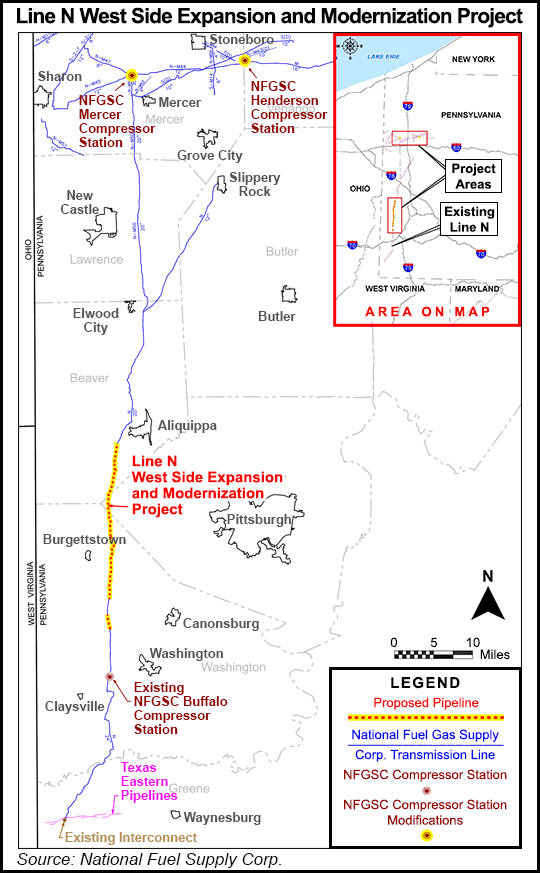 On Thursday, National Fuel Gas Supply Corp. asked the Federal Energy Regulatory Commission for authorization to commence service on Line N, a 23-mile, 24-inch diameter pipeline traversing Beaver and Washington counties. David Reitz, NFG deputy general counsel, told FERC that a contractor working for the regulatory agency had inspected the project’s facilities on Wednesday, and the company believes no major problems were discovered. It wants to put the line in service by Oct. 8.

“NFG believes that this inspection confirms that rehabilitation and permanent restoration of the areas affected by the pipeline facilities are proceeding satisfactorily,” Reitz wrote. “NFG will continue to document the status of its restoration and stabilization in its bi-weekly progress reports.”

Earlier this month, FERC allowed NFG to enter into service two compressor stations integral to the project (see Daily GPI, Sept. 2). At the time NFG said by placing those components into service it could perform a portion of the service requested by one of its project shippers, Range Resources – Appalachia, LLC (“Range”) on an interim basis. The startup of Line N will provide capacity for Range’s full contract quantity.

The project will ultimately increase incremental capacity on the 73-mile Line N, originally built in 1947, by 175,000 Dth/d. It includes the replacement of 23 miles of 20-inch diameter pipeline with 24-inch diameter pipe. NFG replaced 50 miles of the system in 2012, and filed with FERC to replace the remaining segment in February 2014. The company had originally requested a certificate of public convenience and necessity to begin full service by Nov. 1.

Range has subscribed for 145,000 Dth/d of firm transportation capacity on Line N, while NFG’s exploration and production subsidiary, Seneca Resources Corp., has subscribed for 30,000 Dth/d. The pipeline also has interconnections with Texas Eastern Transmission and Tennessee Gas Pipeline.