On a barrel of oil price-equivalent basis, natural gas should maintain a hefty price advantage over gasoline and diesel in the transportation sector, according to a white paper released Wednesday by the trade association Natural Gas Vehicles for America (NGVAmerica). 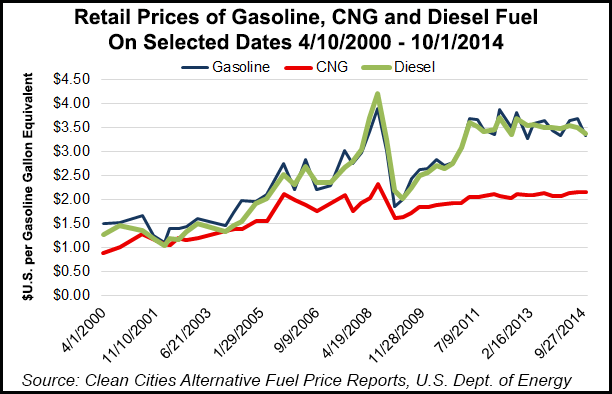 NGVAmerica pegs much of its continuing optimism for the product it is promoting on the U.S. Energy Information Administration’s (EIA) projection of a wide gap over the next 25 years between natural gas and its two transportation fuel competitors: gasoline and diesel.

“Historical data from the U.S. Department of Energy’s Clean Cities Program clearly demonstrate that natural gas transportation fuel prices have been competitive with gasoline and diesel, and have become even more competitive since the ‘de-coupling’ of oil/gas commodity prices in late 2008,” NGVAmerica said.

The white paper allowed that the rosy outlook for natural gas as a vehicle fuel depends upon a continuation of the shale boom.

“Natural gas wellhead prices have been relatively stable since about 2009, and forecasted prices have natural gas at about $2/diesel gallon equivalent through at least 2025.”

Among the white paper’s conclusions:

Charting West Texas Intermediate (WTI) crude oil and natural gas on a Btu-equivalent basis, at the end of 2014 an average WTI barrel was $60.94 compared to an equivalent “barrel” of natural gas for $23.35, the NGVAmerica white paper said. “Even with the steep decline in oil prices, a significant barrel of oil equivalent (boe) price advantage still exists for natural gas.”

The global oversupply of oil is attributed to slowdowns in the European and Chinese economies, along with robust U.S. production, NGVAmerica said. “Demand for oil is still increasing but not as fast as was once forecasted; when demand does not keep up with growing supply, prices decline.”

NGVAmerica cited the International Energy Agency and EIA, both of which project oil prices to turn upward late this year when they are predicting the oil demand and supply lines will cross again. The two agencies are forecasting 2015 prices to average in the mid- to high-$50/bbl range. In 2016, the agencies are predicting $75/bbl for Brent and $71/bbl for WTI.

The white paper is not clear on where and when diesel prices will bottom, but it said the pump price of diesel has not fallen as fast as gasoline pump prices, reflecting the fact that the domestic diesel market is a lot smaller than the U.S. gasoline market. In addition, about 1 million b/d of U.S. diesel are exported to higher-priced markets, and the refining, marketing and distribution costs for diesel also run higher than gasoline.

Another factor keeping diesel prices higher relative to gasoline is its wider appeal in non-transportation markets as it is used in home heating, industrial boilers, etc., in the United States, the white paper said.