Natural gas is cheap today, but over-reliance on the clean-burning fuel down the road could empty consumer pockets with high and unpredictable electricity bills, consultancy IHS warns in a new study on U.S. power supply diversity. 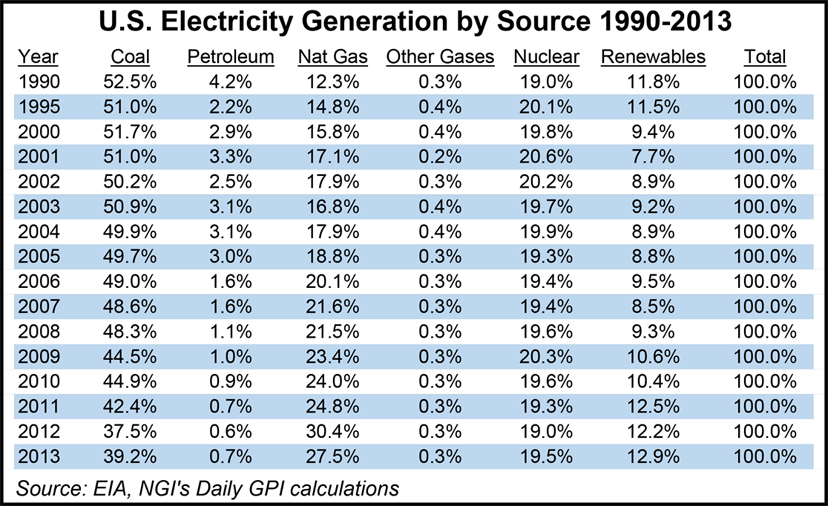 Coal-fired power plants, particularly the older ones, have been getting a beatdown from new and proposed environmental regulations. The capital-intensive nature of the nuclear industry has stifled new plant development. Meanwhile, renewables have become more fashionable, and economic, and the nation is wallowing in an abundance of gas from shale plays. But beware of the dash to gas that goes too far.

“The critical importance of diversity to stability in power supplies and prices is the ‘missing factor’ in much discussion on electricity,” said IHS Energy Vice President and study author,Lawrence Makovich. “A diversified portfolio of U.S. power supply is fundamental to a properly functioning electricity system. It is the most cost-effective tool available to manage the inherent risk in power production costs. However, the value of that diversity is often taken for granted, which can end up creating major unintended problems.

According to the IHS research, if the U.S. power sector had been all natural gas-fired since 2000, the average fuel cost for power would have been more than twice as high and month-to-month power bill variation would have been three times greater.

In coming decades, natural gas’ share of U.S. power generation could rise to nearly 62%; more than double its share in 2013. Previous IHS research has documented the substantial benefits of the recent boom in U.S. natural gas production — led by the growth of shale gas — which has dramatically increased U.S. supplies and energy security while generating significant economic benefits in terms of jobs, investment and government revenue. However, the importance of maintaining a level of diversity in the power sector should also be part of policy and decision-making, IHS said.

“Engineering and economic analyses consistently show that there is no single fuel or technology of choice for power generation,” Makovich said. “Reliably and efficiently supplying consumers with the amounts of electricity that they need when they need it requires a diverse fuel and technology mix.”

IHS compared a base case that reflected the generation mix in regional U.S. power systems during the 2010-2012 period with a reduced diversity case involving a generating mix without meaningful contributions from coal and nuclear power and with a smaller contribution from hydroelectric power along with an increased share of renewable power. The remaining three-quarters of generation in the scenario was from natural gas-fired plants.

The research found that the cost of generating electricity in the reduced diversity case was more than $93 billion higher per year and the potential variability of monthly power bills was 50% higher compared to the base case. The study found that the typical household’s annual disposable income would be about $2,100 less in the reduced diversity scenario, there would be roughly one million fewer jobs compared to the base case and U.S. gross domestic product would be nearly $200 billion less.

“Greater demand for natural gas and electricity to heat homes and businesses in the U.S. Northeast strained the capability of pipeline systems, which led to localized price spikes [see Daily GPI, Jan. 6],” the firm said. “At some points for brief periods, additional natural gas was not available at any price.”

While oil-fired power generators only account for 0.35% of the Northeast’s generating resources, based on 2012 data, during the polar vortex they provided a “critical” supplement to the over-strained system, IHS said. Oil-fired plants generated power that would have required the delivery of 140 MMcf/d of additional gas supply had that power needed to come from gas-fired plants, IHS said. “In the Midwest, the increased utilization of coal-fired power plants played a similar role, providing a necessary substitute for constrained natural gas-fired power plants during the cold snap.”

Shale gas development and restrictions on coal “are driving an increased reliance on natural gas for power generation and provide strong economic benefits,” the study said. “However, this past winter demonstrated the danger of relying too heavily on any one fuel and that all fuels are subject to seasonal price fluctuations, price spikes, and deliverability and infrastructure constraints. The natural gas price spikes and deliverability challenges during the past winter were a jolt for a number of power systems that rely significantly on natural gas in the generation supply. These recent events demonstrated that natural gas deliverability remains a risk and natural gas prices continue to be hard to predict, prone to multiyear cycles, strongly seasonal, and capable of significant spikes.”

The study, “The Value of U.S. Power Diversity,” is available for download from IHS.