Outside the Northeast weekly natural gas prices showed broad strength as only five points in California fell into the loss column, and only modestly at best. 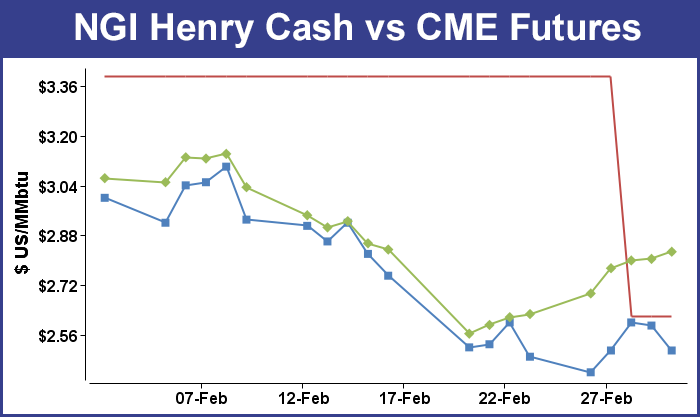 The week was notable as the Energy Information Administration (EIA) reported the first ever February storage build, and the NGI Weekly Spot Gas Average was able to register a solid 10-cent gain to $2.50. The week’s strongest gainer was the Algonquin Citygate, with a rise of $1.10 to $3.41 and the weakest performance was gas at the SoCal Citygate with a loss of 6 cents to $2.78.

Otherwise, gains of about a dime were commonplace.

Thursday saw the EIA report a historic February storage build of 7 Bcf for the week ending Feb. 24, about 11 Bcf greater than the consensus, and although prices dropped initially, futures managed to creep into positive territory. At the close April had risen five-tenths of a cent to $2.804, and May had followed suit with a similar gain to $2.914.

In Friday’s trading natural gas for weekend and Monday delivery had few takers as traders were unwilling to commit to three-day deals when the demand outlook appeared soft.

Traders don’t see much more upside. “I don’t think the market will rise much more,” said Alan Harry, principal with Harry’s RE Trust in New York. “At best we get up to $2.90, and we may be close to the highs right now. Then we head back down.”

He added that Thursday’s storage report was bearish and “it’s just a little while before fundamentals take over. Now it’s just speculators pushing the market up, and I don’t think it has that long to go. I think we will see a low of $2.37 and after that, I am a buyer.”

Fundamentals took a bullish turn on the week as U.S. drillers added just one land-based rig during the week ending Friday, according to Baker Hughes Inc. Another rig rejoined the offshore fleet to make for an overall gain of two. Oil rigs were favored over gas as one industry analyst said gas production needs to step up in the months ahead.

Societe Generale’s Breanne Dougherty has an eye on natural gas demand and said in a Monday note that supply growth is not an option but a necessity.

“To accommodate demand expansion through 2018, and cushion for weather risk, the production base has to grow towards 78 Bcf/d by 4Q2018, just to keep balances ‘comfortable,'” she wrote. “With every passing day of production trending below 71.5 Bcf/d, and now with Cal ’17 and Cal ’18 curves averaging about $2.90/MMBtu, the risk of production underperforming our base case expectation mounts….[P]roduction growth through 2018 is not just preferred, it is necessary.”

Longer-term weather models overnight turned colder. “[Friday’s] 11- to 15-day period forecast is for a cold Midwest/East when compared to yesterday,” said forecaster WSI Corp. in a Friday morning report to clients. “CONUS GWHDDs are up +10.2 to 79.1 for the period. Forecast confidence is considered below average as models are illustrating increased uncertainty in the pattern.”

WSI said the European model is in conflict with the GFS (Global Forecast System). “The ECMWF (European) offers colder risks to the pattern under a flex of a midcontinental/southwest ridge late in the period, resulting in a transient cold shot over the Northeast…The forecast continues to hold with a warmer than average over the East, but we have begun to increase GWHDDs due to recent trends in the ECMWF”

Traders see something of a conundrum between prices that seem stubbornly in place and a supply situation that becomes more bearish with each passing storage report. “This market continues to hang out near the highs of the past couple of sessions following a show of support that extends back to about the middle of last week,” said Jim Ritterbusch of Ritterbusch and Associates in a Friday morning report to clients.

“The ability of the market to hold value in the face of what appeared to be an unusually bearish EIA storage report is providing a bullish pricing portent. But we are not seeing enough shift in the short-term temperature views to force an adjustment in the expansionary surplus trends that were highlighted by yesterday’s data. The surplus against five-year average levels has increased to almost 300 Bcf and will likely be expanding further by an additional 70 Bcf or more with next week’s EIA release. And with reliable short-term forecasts soon to be stretched to the beginning of spring, any major temperature deviations from normal toward the cold side will likely be packing little pricing punch.”

Gas buyers for weekend power generation across the MISO footprint could expect ample renewable energy to offset natural gas purchases. “Sharp cooling trend to seasonable levels [are] expected over the next few days, but another large warming trend [is] expected over the weekend,” WSI said. “High pressure will produce fair conditions, yet seasonably cold temperatures to end the week. But another major warming trend is in store over the weekend, where high temps should rise back into the 50s-80s in through next week. Exceptional wind gen [is] in store over the weekend into early next week where output should rise and hover near 10 GW.”

Not only do buyers have plenty of renewables generation to deal with but also noted that physical prices had an uphill battle in the form of weak power demand. New York ISO forecast that Friday’s peak power load of 19,593 MW would give way to a forecast Monday peak of 19,391 MW. PJM Interconnection predicted that Friday’s peak load of 36,185 MW would slide to 34,445 MW Monday.

The National Weather Service in New York City said that “a series of Arctic fronts move across the region, one this evening and another Saturday. High pressure builds in Saturday night and will be in control Sunday into Monday. A frontal system moves through mid week. A polar cold front may tracks across the area late week.”

Weekend and Monday deliveries at major trading points traded mixed. Gas at the Chicago Citygate rose 1 cent to $2.66, and deliveries to the Henry Hub fell 8 cents to $2.51. Gas on El Paso Permian gave up 3 cents to $2.34, and packages priced at Opal added a penny to $2.41. Gas at the SoCal Border Avg. averaged $2.47, down a penny.