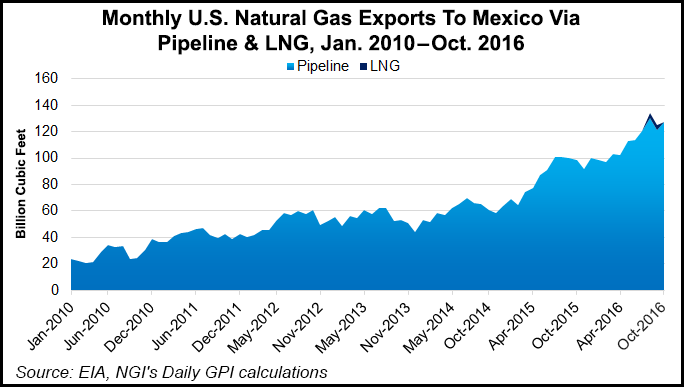 Raymond James & Associates Inc.’s J. Marshall Adkins and Pavel Molchanov were bearish in 2016 about the domestic gas market, forecasting last year that prices would average only $2.00/Mcf. However, Henry Hub looks much stronger today and should average $3.25/Mcf this year, with 2018 prices of $3.50. The long-term price deck now is set at $3.00.

“We still prefer oil to gas, but gas no longer presents as dire a picture as in the last few years,” the analysts said. “Our current 2017 Henry Hub forecast of $3.25, marking a three-year high, looks broadly reasonable. On both the supply and demand sides, positive trends have emerged. We are initiating a 2018 forecast of $3.50, a second up year.”

U.S. gas prices had a “very rough” go in the first half of 2016, but the last six months turned out better than expected, as Mexico exports ramped up and industrial demand tightened the market. This year Mexico gas exports should tighten the market by 0.8 Bcf/d, liquefied gas exports should increase by 0.6 Bcf/d, and Canadian gas imports should decrease by 0.4 Bcf/d.

Weather, “always a black box,” also could be a positive for prices. It’s “reasonable” to assume normalization following last year’s El Nino, which could tighten the market by 1.1 Bcf/d. However, “the market will require higher gas prices to drive 1.4 Bcf/d of 2017 coal-to-gas switching in order to reach normal storage levels.”

The Raymond James analysts tempered expectations for U.S. gas supply growth in 2018, with output expected now to average 5 Bcf/d from a prior assumption of 8 Bcf/d. Analysts see a “more limited effect” from drilled but uncompleted wells in the onshore. Henry Hub prices are seen averaging $3.50/Mcf in 2018, but beyond next year, it has become “abundantly evident” that U.S. gas producers could increase supply by more than 3 Bcf/d every year — even if prices are relatively low.

New Year’s Day marked the start of a historic agreement by the Organization of the Petroleum Exporting Countries and their allies, including Russia, to reduce global output for about six months by a total of almost 1.8 million b/d. The cartel is scheduled to meet in May to discuss whether to extend the cuts.

“As far back as 2012, our oil model has suggested the mid-$60s as the ‘right’ oil price to balance the market,” Adkins and Molchanov said. “We still believe that is close to the right number.” Given the industry’s “persistent success” in reducing costs, the long-term price deck was reduced to $60/bbl from $70.

The credit analysts are assuming a medium-term oil price band of $40-60/bbl for Brent and WTI.

“Within this band, we expect prices to remain volatile, with more risk of dropping,” Marshall said. “Prices that approach the upper end of this band would support increases in supply, including some development of the world’s most expensive oil — from oilsands and deepwater resources — in an environment with lower development costs than in recent years. Our medium-term expectations for the likely range of oil prices are the most relevant price considerations for estimating financial performance and ratings of companies and oil-exporting sovereigns.

Sorbara and his colleagues are “firm believers” that the bottom is in for oil, NGL and natural gas prices, but “value is tougher to find on average across the E&P sector, even at our above-strip commodity price deck.” The firm’s long-term price assumptions are $3.50/Mcf Henry Hub and $70/bbl WTI. Expect a “volatile 2017” for commodity prices and E&P equities, he said.

In aggregate, Raymond James expects cash flow and capital spending by U.S. exploration and production (E&P) companies to rise “well above” market expectations in 2017, as realized oil prices rise around 40% and realized gas prices improve by 25%. The gains may be offset in part by operating service costs, which could increase by 10-15%, and drilling/completion costs jumping by as much as 30%.

“Putting all this together, we project that 2016 E&P cash flows, on the whole, will increase by around 125% for the full year,” Adkins and Molchanov said. “We expect this to translate into a year/year increase of around 105% in 2017 oilfield spending.”Cash flow is sensitive to price movements, however, with even a $5.00/bbl decline in oil prices resulting in as much as a 25% shift.

“We think that the total U.S. rig count will increase by an additional 250 rigs (or 39%) over the next 12 months,” the Raymond James analysts said. “On a full-year average basis, we expect the 2017 rig count at 800, up 57% versus the 2016 level of 509.” Most of the growth is expected through June, tempered in the last half of the year as labor and pressure pumping constraints slow the industry’s ability to meet activity demand.

For the OFS and drilling sector, Moody’s is forecasting another tough year in 2017 because of continued weak customer demand, overcapacity and a high debt burden.

“Demand will grow only very gradually in 2017, and OFS pricing recovery and cash flow growth will lag those of their upstream customers by at least 12 months,” Marshall said. “Widespread overcapacity in equipment will also delay OFS companies from raising prices in 2017, and offshore services that serve costly, long-cycle projects will recover last. Debt maturities will pose the greatest default threat to OFS companies in 2017.”