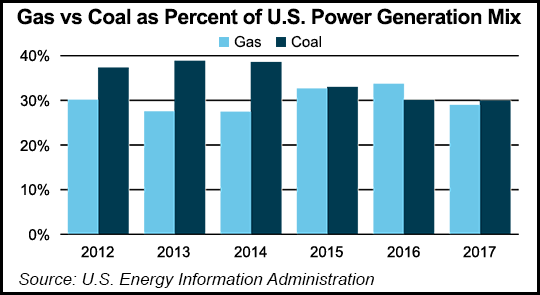 “Natural gas markets are entering this winter with a strong storage base and an expanding pipeline network that is delivering more supply to local markets and beyond,” according to the report. “A lag in natural gas production over the past year and a half is expected to give way to renewed production growth as a result of increased drilling activity, while LNG [liquefied natural gas) projects in the Gulf and East coasts are expected to increase demand.

“Weather forecasts call for warmer-than-normal winter temperatures that look to moderate demand in the most sensitive markets, for example the Northeast, during the upcoming season.” As always, extreme winter weather events can dramatically alter short-term demand, OE said.

In a separate winter outlook also released Thursday, the National Oceanic and Atmospheric Administration (NOAA) said it expects warmer-than-normal conditions along the southern two-thirds of the United States, the East Coast, Hawaii and much of Alaska in the coming months.

Hurricanes Harvey and Nate forced closures or reduced operations at more than 10 refineries in Texas and Louisiana, but gas and electric markets “are unlikely to be impacted by long-lasting outages” from the storms, according to the OE report.

Production Expected to Grow by 5 Bcf/d

Domestic natural gas production increased in July for the first time in 15 months, and that trend is expected to continue through the winter. Led by the Appalachian, Haynesville and Permian basins, “United States production is expected to grow by more than 5 Bcf/d year-over-year by April,” OE said. “These production gains could further strengthen the natural gas system’s reliability for winter, particularly in and around the Northeast.”

Production growth has been slower this year than in 2016, resulting in lower storage levels, though gas inventories remain near the five year average, OE said. The Energy Information Administration on Thursday reported a storage injection of 51 Bcf for the week ended Oct. 13. Inventories now stand at 3,646 Bcf and are 179 Bcf less than last year and 35 Bcf less than the five-year average.

“From this robust base, the natural gas market should be positioned to meet anticipated needs for natural gas throughout the winter,” OE said.

Henry Hub spot prices are averaging about 50 cents higher than they were a year ago and are likely to average at or near the low levels seen in 2016 this winter, outside of weather-driven peak days, during which prices may surge higher, OE said.

“Basis futures prices are signaling market expectations for slightly higher prices in New England during the winter, while many other regions see some relief from 2016 levels. Henry Hub futures prices averaged in the low $3/MMBtu range for January and February, a few cents below last year’s market expectations going into winter. Futures prices in Southern California and in the Midwest are similarly showing a slight drop from 2016 prices, while New York City futures are more than one dollar lower, though still near $8/MMBtu.”

“There is a concern over lack of storage in the New England market…but it’s the capacity constraints that are worrisome to us,” said Adam Bennett, an OE energy industry analyst. “When you hit those extreme weather events, or the peak conditions during in the winter, that’s what we are monitoring during the winter and will continue to monitor, ” said Adam Bennett.

“We have a little bit less than a third of our fleet that’s gas-only units, so dual-fuel becomes important to us, and also any stored fuels, like the LNG at the two facilities that are in the Northeast are extremely important to us,” Brandien said.

At the opposite end of the country, OE remains concerned about operational constraints out of Aliso Canyon, California’s largest underground natural gas storage facility.

“Though the facility has returned to service after an extended outage following the 2015 leak, 62 of the facility’s 114 wells were taken out of permanent operation, limiting injection and withdrawal capabilities. Currently, the Southern California Gas system holds 65 Bcf in storage, the lowest on record for this time of year since at least 2001 and far below the 118 Bcf the system has averaged over the past five years.

“This low inventory did not disrupt the gas system during the summer, with an electric peak near record levels and some periods of stressed conditions. It is conceivable, however, that limitations at Aliso Canyon during periods of the highest winter demand could challenge regional stability and increase natural gas and electricity prices.”

Natural gas supplanted coal as the most popular fuel for power generation in 2016, but slightly higher gas prices in some regions this year have made coal more competitive this year, OE said. “This dynamic is likely to continue through the winter, when coal typically takes a more prominent position in the generation mix.”