Natural gas trading for the week ending Aug. 28 was a sea of tranquility compared to the wild gyrations emanating from Wall Street and other commodity markets. In Monday’s trading alone the Dow Jones Industrial Average opened with a 1,000 point plunge and ended the day with a loss of 588 points, the worst since August 2011. Natural gas traders were more subdued. 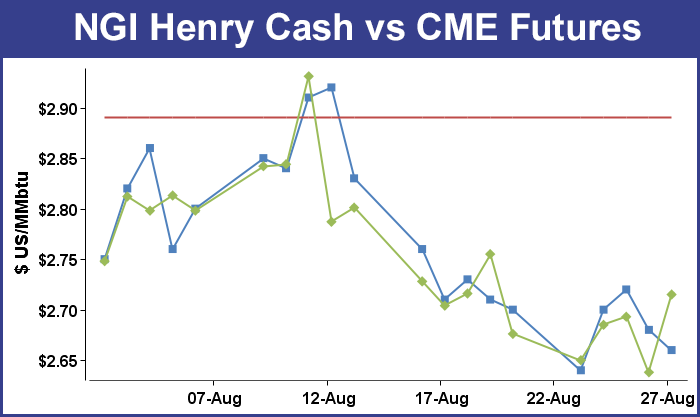 NGI’s National Weekly Spot Gas Average eased a miniscule 3 cents to $2.51, and the greatest move at any market point was a gain of 35 cents to $2.28 posted on Tennessee Zone 5 200 L. The week’s biggest loser was Transco Zone 6 New York with a drop of 34 cents to average $2.40. Elsewhere most points moved about a nickel lower.

Regionally the Midcontinent struggled the most giving up 9 cents to $2.53, and the Northeast showed the smallest loss — dropping a penny to average $1.94.

The expired September futures contract finished at $2.638, down 24.8 cents from the August settlement.

October futures added 1.8 cents to $2.715 in spite of Thursday’s weak finish on the heels of an inventory report showing a storage build that no one anticipated. The report gave traders an opportunity to hone their estimates of winter supply. Earlier estimates of bin-busting storage over 4 Tcf have now been moderated closer to 3.9 Tcf, but injections going forward look to be robust. Estimates for the week ended Aug. 21, however, looked to be no greater than the five-year average. At the end of the day September futures had lost 5.5 cents to $2.638 and October fell 3.9 cents to $2.64.

Last year, 77 Bcf was injected, and the five-year average stands at 61 Bcf. Analysts at IAF Advisors calculated a 61 Bcf injection, as did the folks at ICAP Energy. A Reuters poll of 20 market observers revealed an average 59 Bcf with a range of 47 to 64 Bcf.

They all missed. For the week ended Aug. 21 the Energy Information Administration (EIA) reported an injection of 69 Bcf in its 10:30 a.m. EDT release Thursday and the expiring September futures fell to a low of $2.629 after the number was released.

Early price action after the number came out had traders scratching their heads. “I don’t get it why it would rally back after a bearish number,” said a New York floor trader. “The high side of expectations was 64 Bcf, With 69 Bcf, what is going on here? Perhaps people were looking to get in this market at lower levels and saw the low $2.60s as an opportunity.”

Analysts saw an inconsistency in the reports that makes an accurate assessment difficult. Tim Evans of Citi Futures Perspective called the report “a clear bearish surprise. In terms of the larger pattern here, we note there has been considerable volatility in recent reports, with some alternation between bullish and bearish surprises that makes it difficult to forecast and difficult to assess the background supply/demand balance.”

Inventories now stand at 3,099 Bcf and are 480 Bcf greater than last year and 88 Bcf more than the 5-year average. In the East Region 53 Bcf were injected and the West Region saw inventories increase by 4 Bcf. Stocks in the Producing Region rose by 12 Bcf.

“Today’s higher-than-anticipated report caught the market off guard and sent prices lower following its release,” said Teri Viswanath, director of natural gas strategy at BNP Paribas. “At the close, the expiring September ”15 contract settled at $2.638/MMBtu or a loss of $0.055 on the day.

“We expect that domestic production will begin to increase once again in October, when heating demand will mask some of the supply gains. In fact, without strong heating demand, inventories might continue to build into the start of the heating season. Thereafter, we expect relatively light seasonal withdrawals, with end of storage approaching 1.8 Tcf by end March. Consequently, with inventories likely to remain high through the upcoming winter, the opportunities for an extended seasonal rally appear to be limited.”

In Friday’s exchanges, weekend and Monday physical natural gas showed some isolated pockets of strength, but for the most part traders were reluctant to spring for three-day deals and prices retreated.

A few points in the Gulf Coast and Midwest were firm, but were unable to counter broad overall declines. The NGI Daily Spot Gas Average fell 4 cents to $2.46, but declines in the Northeast averaged closer to 13 cents. Futures managed a rebound off recent lows as forecasters see a return of warm temperatures, and at the close October had risen 5.1 cents to $2.715 and November was up by 4.7 cents to $2.792. October crude oil continued its recent winning ways and added $2.66 to $45.22/bbl.

Weekend and Monday gas at Northeast market centers was mixed as forecasters called for temperatures as much as 10 degrees above normal beginning next week. Forecaster Wunderground.com predicted Friday’s high of 77 in Boston would rise to 83 Saturday and 88 by Monday. The normal high in Boston is 78 this time of year. New York City’s Friday high of 80 was expected to reach 86 Saturday and climb to 92 by Monday, 11 degrees above normal.

Those prices could seem like bargain-basement specials if planned capacity restrictions at the Algonquin Southeast compressor station collide head on with expectations of warmer temperatures. Industry consultant Genscape reported that restrictions “will be eased only slightly on Monday, leaving the constraint on flows into New England in place for another two weeks. With more heat and demand expected next week, the restriction could continue to place upward pressure on AGT basis.

“Capacity at Southeast is currently restricted to 1,250 MMcf/d versus its normal 1,460 MMcf/d. That restriction expires Monday, but work at the Stony Point compressor will only allow Southeast capacity to rise to 1,330 MMcf/d through Sept. 8. Algonquin issued notice warning shippers to keep nominations in balance with higher than normal demand expected Monday with the return of above-normal temperatures.”

Restrictions were also in play in the Midwest, as a Michigan marketer said “we continue to be concerned about capacity restrictions on some points going into Consumers. Hopefully that doesn’t come back and bite us.”

Gas on Consumers was quoted at $2.96, up 4 cents, and deliveries to Michigan Consolidated added 6 cents to $2.96 also. Gas on Alliance for the weekend and Monday shed a penny to $2.79, and packages at the Chicago Citygate also shed a penny to $2.77.

Overnight forecasts showed an increase in cooling load. “The 11-15 day period forecast is generally a bit warmer than yesterday’s forecast,” said WSI Corp. in its Friday morning report. “Period PWCDDs are up 2.1 and are now forecast to be 46.1 for the period. Forecast confidence is only average, at best, today. There is uncertainty with the long-term impacts or influence of tropical activity on the pattern and as well as potential changes with the upstream and downstream pattern drivers.

“The forecast has risks in either direction, especially late in the period. Clim[atology] and any shift with the pattern supports a risk to the downside across the eastern half of the nation, while the western half has a slight risk to the warmer side.”

Analysts see the warmer forecasts as countering bearish storage numbers. “The ability of the market to shrug off bearish supply side news has been facilitated by further supportive guidance from the demand side in the form of some increasingly warm temperature deviations,” said Jim Ritterbusch of Ritterbusch and Associates in a Friday morning note to clients.

“Updates that are now stretching through the first third of next month are favoring much above normal temperature trends that will be downsizing storage injections beyond next Thursday’s EIA release. A sizable upswing into the 75-80 Bcf zone has likely been priced in, and any extension of hot temps toward mid September or storm activity into the GOM could easily force nearby futures up into the $2.80s. But an implied price advance of more than 20 cents from yesterday’s close will likely require an ‘event,’ such as a major hurricane or significant pipeline disruption, neither of which is currently on the radar.”

Buyers for power generation over the weekend across the PJM footprint may be kept busy acquiring supply as renewable generation is expected to be light. “High pressure will support partly sunny skies, low humidity and seasonable temperatures across the bulk of the power pool [Friday]. High temps will generally range in the upper 70s to mid 80s. It will trend warmer and humidity levels will gradually creep up during the weekend into early next week,” WSI said.

“This warmth and an upper-level disturbance will lead to an increasing chance of widely scattered showers and thunderstorms. High temps will range in the upper 70s, 80s to low 90s. A small boost of output is expected tonight with output as high as 1-2 GW. Relatively light and changeable wind generation is expected during the remainder of the weekend through early next week.”

In its 5 p.m. EDT Friday report, the National Hurricane Center said Erika was 95 miles west southwest of the Dominican Republic and winds were at 50 mph. It was heading west at 21 mph and was projected to move northwest up the Florida peninsula.

California Wildfire Advisory Board Issues Guidelines for Next Year