Forecasters are expecting a relatively mild winter this year, and natural gas production continues to break records, but the industry will still face challenges in coming months, FERC staff told the Commission Thursday during the Winter 2014-2015 Energy Market Assessment presentation. 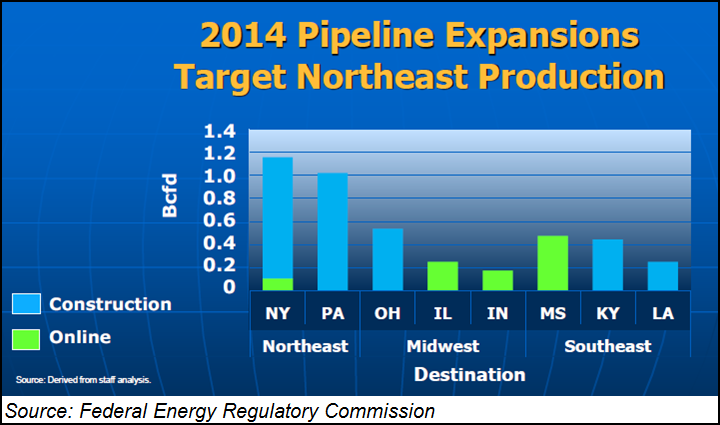 “While current spot market natural gas prices are in the $4.00/MMBtu range over most of the country, winter futures are significantly higher,” according to the report, which was presented by the Federal Energy Regulatory Commission’s Office of Enforcement (OE). “Natural gas storage is below average, and coal stockpiles are lower than usual. Although new pipeline capacity has been added since last winter, there are still restrictions in New England. In some regions, there is an increased reliance on natural gas for electricity generation.”

Winter 2013-2014 brought harsh weather to much of the country, including polar vortices that drove the number of heating degree days to unusual highs and prompted FERC to invoke its emergency authority under the Interstate Commerce Act to help alleviate “dangerously low” propane supplies in the Midwest and Northeast (see Daily GPI, Feb. 6; Feb. 10). As always, “weather is the key wildcard going into the winter and is the main driver of natural gas demand and prices,” OE said.

“The impact of high winter demand on prices may not be as severe as last year; however, as new pipeline capacity in the Northeast should alleviate some bottlenecks within the Marcellus producing region and the New York market area. The additional pipeline capacity could reduce pipeline utilization into New York from peaking at nearly 100% of capacity last winter to around 60% during the coming winter.”

And forecasters aren’t expecting conditions this winter to match the unusually cold stretches of 2013-2014.

“Would we say we would not expect to see a repeat of last winter? I would certainly agree with that,” Halpert said. “Is it impossible to see another very cold winter in parts of the country? Certainly that’s possible. Our outlook certainly doesn’t favor anything like that.” NOAA forecasters expect below-average temperatures to dominate parts of the South-Central and Southeast United States this winter, while above-average temperatures are most likely in New England, the West, Alaska and Hawaii.

“Cold air will surge into the Northeast in late November, but the brunt of the season will hold off until January and February,” AccuWeather said. “The polar vortex, the culprit responsible for several days of below-zero temperatures last year, will slip down into the region from time to time, delivering blasts of arctic air.” But the bitter cold spells aren’t likely to be as persistent this winter as they were last year, the forecaster said.

NOAA said it expects some improvement this winter to the record-setting drought in California, though complete recovery is highly unlikely. “While we’re predicting at least a two in three chance that winter precipitation will be near or above normal throughout the state, with such widespread, extreme deficits, recovery will be slow,” Halpert said.

AccuWeather.com expects winter precipitation to be heavy at times in the Southeast, Gulf Coast, Southern Plans and interior Southwest, but like NOAA doesn’t see it bringing an end to the Western drought.

“December will bring some rain to northern California, but the precipitation will ease off in the following months, making the region drier than normal by February,” AccuWeather.com said.

A continued drought, combined with 1,000-3,100 MW of import declines due to maintenance on the Pacific DC Intertie transmission line, would force California to rely more than ever on gas-fired generation, OE said. “California may face supply and market issues as it relies more on natural gas-fired generation this winter and faces increased evening ramps…Higher solar generation will increase the evening ramp required of natural gas generation and fast-start units will increase the rate of draw from gas pipelines. Southern California enters the winter with gas storage levels 15% below last year and generators continue to face the risk of gas supply disruptions.”