Natural gas shippers will save C$506 million (US$364 million) as a result of TransCanada Corp.’s proposed partial conversion of its natural gas Mainline to oil service, the pipeline company predicted. 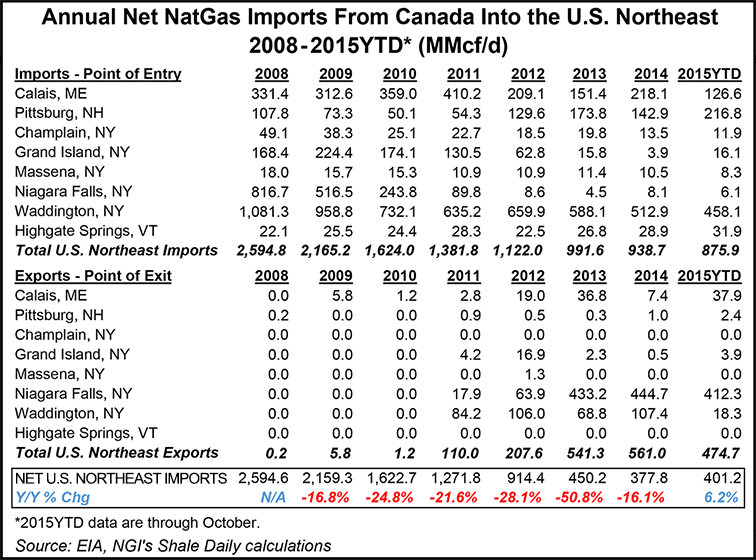 About four-fifths of the benefits would occur in western Canada, where costs of excess facilities would be cut the most by the C$15.6 billion (US$11.2 billion) conversion, according to project amendments and updates filed with the National Energy Board (NEB).

Converting one of the six jumbo pipelines in the system’s single right-of-way into an oil conduit would cut gas capacity between Alberta and Ontario by 18% to 5 Bcf/d from 6 Bcf/d, according to the filings (see Daily GPI, Dec. 21, 2015).

But the drastic market changes that emptied the pipe — rising imports of low-cost shale gas from the United States into Ontario and Quebec, coupled with growing industrial consumption in Alberta — are permanent, the board was told.

“What is needed is regulatory recognition that there is a higher and better use for this conduit and that better use is in oil service,” said a report by former NEB chairman Roland Priddle, who appears in the case as an expert witness for TransCanada.

“The wasteful alternative, which is to leave the gas facilities in question captive to the continuing highly challenging business environment that the Mainline faces, seems unthinkable.”

“TransCanada’s Eastern Mainline project will not only meet the near- and medium-term market demand,” Reed wrote in a report commissioned by the pipeline company.

The route and services reflect planning cooperation with distributors Union Gas in southern Ontario, Enbridge in the Toronto region and Gaz Metro in Quebec. As a result, Reed predicted that the Eastern Mainline “will facilitate increased gas imports into the Eastern Triangle [Ontario and Quebec] along the most direct path, thereby enhancing regional security of supply over the long term.”

Growing Marcellus and Utica shale gas supplies in the northeastern United States are forecast to continue pushing out Canadian exports. The trade tables are expected to keep on turning, in reversals of pipeline border crossings for northbound U.S. flows.

TransCanada said its own calculations show “export demand is projected to fall precipitously over time as the region [Ontario and Quebec] switches from being a net exporter of gas to the U.S. to becoming a net importer by 2019.”

Canadian exports to the northeastern U.S. are rapidly plunging by about 90%, from a trade mainstay in the range of 700 MMcf/d to a last trickle of 60 MMcf/d as of 2018, the pipeline company estimated.

Effects on gas transportation costs of the parallel oil conversion and eastern pipe replacement projects would evolve gradually. Tolls are scheduled to remain the same in 2016 and 2017, enter an adjustment period in 2018-2020 then start registering all the changes in 2021 after construction is completed.