After a brief swing into positive territory, natural gas futures prices on Wednesday ultimately gave back a bit of the previous three days’ worth of gains as traders focused on an expected triple-digit storage build rather than on increasing heat in weather models. The July Nymex gas futures contract settled 1.3 cents lower at $2.386, with similarly small losses seen through the rest of the curve. 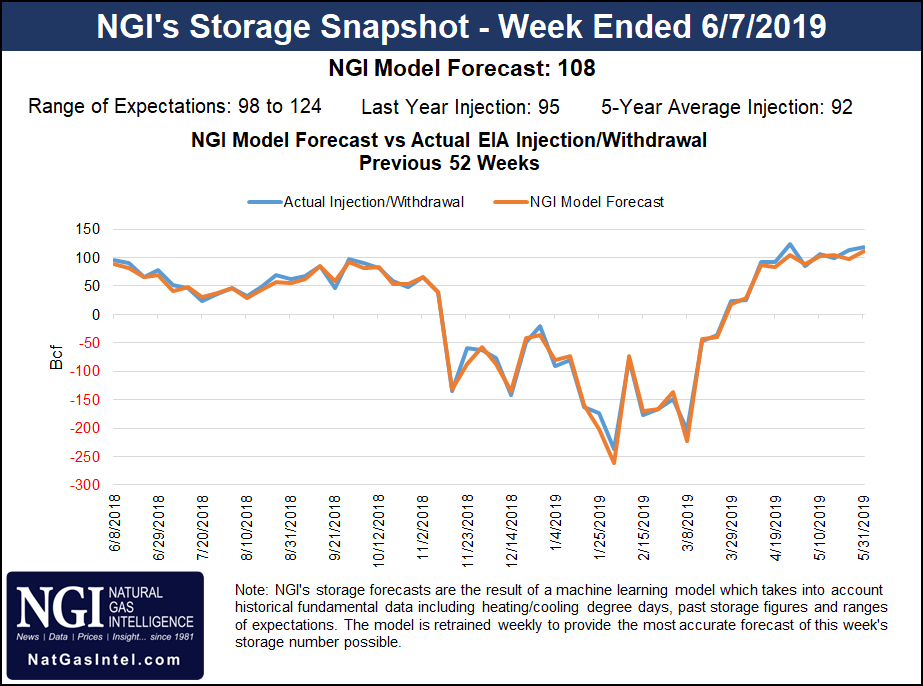 Spot gas prices were mixed, but most markets shifted only a few pennies in either direction. The exceptions were in California and West Texas, where a steep sell-off occurred despite continued scorching temperatures in the region. The NGI Spot Gas National Avg. ultimately slipped 5 cents to $2.025.

To be sure, natural gas traders — both in West Coast cash markets and in the futures market — appeared to brush off significant heat that has steadily been building in weather outlooks. Although Tuesday’s midday data was enough to send the prompt-month Nymex contract up about 4 cents, traders quickly reversed course on Wednesday despite an even warmer shift in outlooks.

The hotter-trending forecast was the risk Bespoke Weather Services had been expecting “based on shifts in tropical forcing patterns and what should be another temporary backing off of the intensity of the El Niño state.”

The outlook showed heat levels building, especially across the southern half of the United States, which, pattern wise, is similar to what occurred in the second half of May. The shift was evident in the American and European ensembles, “both of which are quicker to erode this week’s cooler pattern, and allow for near to slightly above-normal gas-weighted degree days thereafter,” Bespoke chief meteorologist Brian Lovern said.

The pattern portends stormy conditions returning to the Midwest, so heat may continue to be blunted there, but Bespoke said a few hotter days may begin to show up in parts of the East moving forward, again similar to the late May pattern.

The midday Global Forecast System (GFS) data continued to warm for next week into the last week of June, according to NatGasWeather. The European model also trended hotter Tuesday and overnight to add numerous Bcf in demand, although is still less impressive with coverage of heat comparatively.

“Where the data has been hotter is with strong high pressure across the eastern half of the country beginning next week, then pulsing even stronger with it June 24-26,” NatGasWeather said.

Meanwhile, weather-adjusted power burns have been revised tighter, according to Bespoke. “In absolute terms, the burns are very strong given that demand currently is quite low. This keeps daily balances rather tight, and given the hotter shift in the weather pattern, this brings our overall sentiment back into the ”slightly bullish’ category.”

Thursday’s storage data “is, of course, the big risk to this idea, but if we avoid another bearish surprise, we see $2.50 back in play into next week.”

Last year, the Energy Information Administration (EIA) reported a 95 Bcf increase to inventories for the similar week, and the five-year average stands at 92 Bcf.

“While fully operational capacity is still an unknown, and downstream takeaway constraints are a potential issue, the fact that a route to deliver U.S.-sourced natural gas to the thirsty central and southeastern Mexican markets is a plus for both Mexican consumers and U.S. producers,” Mobius Risk Group said.

Market observers so far have yet to see any flows on Sur de Texas-Tuxpan’s feeder pipe Valley Crossing, and only expect the pipeline to run at about 25% capacity in the first few months of service. Still, 650,000 MMcf/d of gas capacity would provide a significant chunk of demand and likely some price relief to the market.

On the supply front, Genscape Inc. estimated that Lower 48 production on Wednesday was down to 86.82 Bcf/d. While likely to be revised, the figure represented a 0.69 Bcf/d day/day drop and sinks production to a 23-day low.

“This continues to drag on the month-to-date average underperforming our forecast by more than 1.1 Bcf/d,” Genscape senior natural gas analyst Rick Margolin said. “We once again reiterate that this underperformance is maintenance-related and not indicative of any structural shifts by producers.”

The Permian Basin has been the largest source of underperformance as month-to-date volumes have come in 0.64 Bcf/d below forecast. Takeaway constraints have been exacerbated by planned and unplanned maintenance events on Natural Gas Pipeline Co. of America and El Paso Natural Gas.

“The situation may have been worse except that the region has marginally increased exports to Mexico by about 130 MMcf/d in the past 30 days,” Margolin said.

Gulf Coast area volumes are coming in low by more than 0.44 Bcf/d versus forecast. Nearly all of these declines are from northern Louisiana, where planned and unplanned maintenance has impacted volumes, according to Genscape. The firm is also seeing notable daily swings in offshore receipts.

Gulf of Mexico sample volumes were down nearly 0.14 Bcf/d day/day primarily led by volumes on Destin Pipeline throttling down with the startup of the 14-day Pascagoula plant maintenance.

Rockies production is underperforming by 0.3 Bcf/d versus forecast. Roughly two-thirds of the miss is from the Opal area, where production takeaway has been impacted by maintenance on Kern River, Overthrust and Rockies Express pipelines.

Last month, daily production estimates at one point trailed forecasts by nearly 1.4 Bcf/d, but when most of the maintenance events concluded, the end-of-month average came in 0.4 Bcf/d below forecast, according to Genscape. The firm expects this month’s volumes to show a similar rebound and closing of the delta to its forecast.

Spot gas trading action was relatively quiet on Wednesday as little change in weather patterns was expected in the next several days. The same was true for the West Coast, where a heatwave blanketing the region was expected to stick around the rest of this week, lifting demand from the Pacific Northwest to Southern California.

Generation throughout the Western Electricity Coordinating Council area is up 1,023 GWh day/day, with gas leading the way among the different fuels in the stack, according to Genscape.

PG&E Citygate basis picked up another 8 cents Tuesday to reach 64 cents, bringing the month-to-date average to 30 cents, its strongest run for the month of June since 2015. Total system demand crested the 2 Bcf/d mark for the first time this summer as temperatures in the San Francisco Bay Area topped 100 degrees, setting new record highs.

Power supply had been temporarily cut to thousands of Pacific Gas & Electric Co. customers as a precautionary measure against wildfires, but it did not make a dent in overall demand. “Power prices reportedly topped the $1,000/MWh mark and noncore electric demand for gas hit 876 MMcf/d, a mark not reached last summer until mid-July,” Genscape’s Margolin said.

Forecasts showed the heatwave starting to move northward into the Pacific Northwest. “With temperatures across the region forecast to run as much as 20 degrees above normal into the weekend, total regional gas demand is projected to approach 1.9 Bcf/d, a mark not achieved last summer until September,” Margolin said.

Despite the scorching outlook, fixed prices softened throughout the region Wednesday, with SoCal Citygate plunging 57 cents to $3.025 and basis contracting to less than 70 cents. At PG&E Citygate, spot gas dropped 10 cents to $2.88, sliding to a 52.5-cent premium over Henry Hub.

Meanwhile, a large weather system over the central and northern United States was keeping a lid on temperatures even as far away as Texas, the South and the greater Southeast. Given the lack of strong demand in those regions, as well as the steep price declines in California, West Texas cash markets suffered a blow Wednesday.

After surging as high as $1.45 on Monday, Waha spot gas dropped as low as 3 cents on Wednesday before going on to average 44.5 cents, a loss of 27 cents on the day.

In the Midwest, next-day gas shifted a few cents in either direction, with Chicago Citygate climbing 2 cents to $2.175.