The losing streak for natural gas futures continued for a 12th straight day on Wednesday as the long-term weather pattern was relatively stable and traders set their sights on another potential triple-digit storage injection in upcoming government data. The Nymex November gas futures contract fell 3.6 cents to settle at $2.247/MMBtu. December slid 2.9 cents to $2.451. 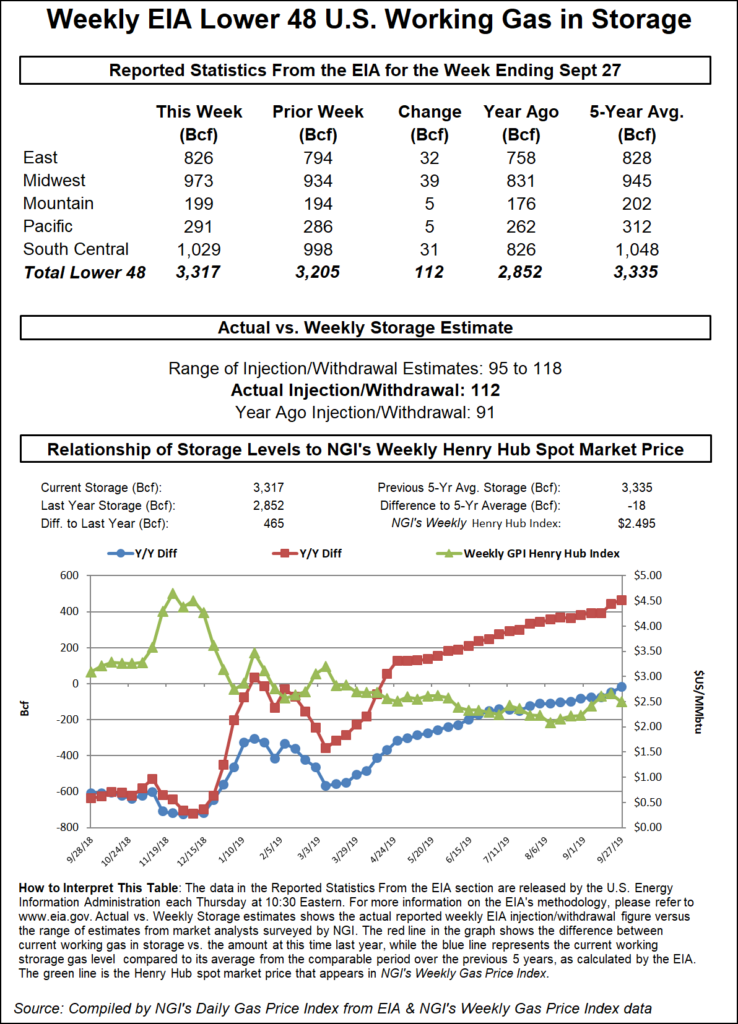 Higher demand remained on tap for the rest of this week, but then the pattern is expected to shift to a lower-than-normal demand regime starting next week, according to Bespoke Weather Services. Models generally remain in decent agreement, and even the minor deviations keep total demand easily below normal levels.

Bespoke’s expectation is that global wind patterns favor warmer-than-normal conditions prevailing through the latter part of October, which is quite a difference from last year’s six-week cold period that began in mid-October.

However, any significant change in those wind patterns could lead to a rebound for Nymex futures, or at least soften the fall, according to EBW Analytics Group. The firm pointed to trading activity on Tuesday, when the November and January contracts plunged in tandem early in the day, but then the January contract went on to settle with a smaller day/day decline.

“The January contract’s rebound most likely was triggered by signs that global winds are starting to pick up speed, potentially strengthening demand for natural gas later in October,” EBW said. Weather model guidance also shows the Madden-Julian Oscillation “to shift to a more neutral phase and for blocking to increase.”

“While it is not unusual for winter contracts to descend at a slower pace than the front month, the pace of the increase in the spread during recent trading may be an indicator that the January contract could soon provide additional support — and the sharp downward move of the past two weeks is close to becoming fulfilled,” EBW said.

That theory could be tested on Thursday, when the Energy Information Administration (EIA) releases its weekly storage inventory report. After a major surprise to the upside last week, which was attributed to stronger-than-expected production, traders are eager to see whether the production story holds up in the latest data.

“This is certainly understandable with a cumulative summer injection that is poised to be No. 2 in the shale era,” Mobius Risk Group said. “Including reasonable estimates for the remainder of the traditional injection season suggests the summer 2019 total will be near 2.6 Tcf, versus the record set in 2014 of 2.75 Tcf.”

This factor alone is enough to keep near-term prices on the defensive, and weak shoulder-season demand is adding fuel to the “fire sale,” according to the firm. “Considering that today’s supply levels under similar weather conditions could generate weekly storage builds well into November is a freight train speculative bulls are understandably not willing to challenge for the time being.”

Ahead of the EIA report, a Bloomberg survey of 12 analysts had an injection range of 100 Bcf to 118 Bcf, with a median of 106 Bcf. A Wall Street Journal poll also had a median of 106 Bcf, with estimates ranging from 95 Bcf to 105 Bcf. Intercontinental Exchange Financial Futures settled Tuesday at a 110 Bcf build, while NGI modelled a 109 Bcf injection.

Last year, the EIA reported a 91 Bcf injection, and the five-year average stands at 83 Bcf.

While Thursday’s price action could be heavily influenced by the EIA data, the attention on production and the stubbornly loose market is obscuring the relevance of other notable facts, according to Mobius.

“Unless this winter is significantly warmer than normal, it is difficult to believe production growth would remain at 3 Bcf/d or more year/year through calendar 2020, and this is what would be required in order to prevent supply and demand from transitioning from loose to tight,” Mobius said.

Spot gas prices came crashing down across the eastern United States on Wednesday as an unseasonably strong ridge across the South and East was forecast to continue for a couple more days, according to NatGasWeather. The warm ridge is bringing comfortable highs of 70s and 80s from Chicago to New York City for light demand.

The lackluster demand sent prices in parts of the Northeast down by double digits. Tenn Zone 6 200L cash plunged 15.5 cents to $1.86, while Algonquin Citygate fell less than a dime to $1.915.

Day/day changes were less extreme in the Southeast, where prices shifted less than a nickel. Similar trading action was seen in Louisiana.

The Midwest and Midcontinent posted some of the most pronounced gains across the country, with Chicago Citygate edging up 8 cents to $1.905 and several pricing hubs in the Midcontinent rising more than a dime.

The broader gains in the region boosted OGT to a nickel premium over the Waha hub in the Permian Basin, where gains were far less pronounced than they had been in the days since Kinder Morgan Inc.’s Gulf Coast Express pipeline entered full service.

The slower pace of gains could be tied to a projected decline in local demand as the sprawling, and nearly stationary, area of high pressure that has extended summer in the Lone Star State is expected to weaken and shrink in size through the weekend.

A cold front sliding to the Southwest down the eastern slopes of the Appalachians will act as the first cooling mechanism this weekend, bringing relief to Virginia, the Carolinas and much of Georgia, according to AccuWeather. High temperatures in the 90s will be replaced with highs in the 70s and 80s across these areas over the weekend.

Although 90 degree heat will still bake the Deep South this weekend, increased cloud cover will prevent highs from surging into record territory, AccuWeather said. By early next week, however, summer will finally be brought to a screeching halt across the entirety of the southern United States.

“A vigorous cold front that will first bring beneficial rainfall to the drought-stricken South from Monday into Monday night will then usher in the unofficial start to autumn by midweek,” AccuWeather said. “Behind this front, low humidity is expected to accompany high temperatures generally in the 70s and 80s from the Tennessee River Valley to the Gulf Coast.”

Spot gas prices at the Katy hub in East Texas slipped 3.5 cents to $2.245, while slightly more pronounced losses were seen in South Texas.

California prices were mixed, but the most significant changes were seen in the northern part of the state. That’s because Ruby Pipeline is set for a one-day maintenance event on Thursday that has the possibility to disrupt 338 MMcf/d of flow headed west from the Rockies toward California.

Ruby will be conducting pigging activities that will reduce the operational capacity at the “NV/OR ST LINE TO TULE LAKE” throughput meter to 487 MMcf/d. This segment has flowed an average 851 MMcf/d the past 30 days from Ruby to Pacific Gas & Electric’s (PG&E) Redwood Path, according to Genscape Inc.

Similar past events have resulted in a spike in Gas Transmission Northwest’s deliveries to PG&E to accommodate for the drop in Ruby receipts, the firm said. PG&E will also have the option to source alternative gas by increasing storage withdrawals as they did during a somewhat comparable event in August 2018.