Gains of 30 cents or more were the norm for most natural gas forwards markets for the period between Nov. 23 and Dec. 1 as the string of weather systems bringing cooler-than-normal temperatures continues to sweep across the U.S., according to NGI’sForward Look. 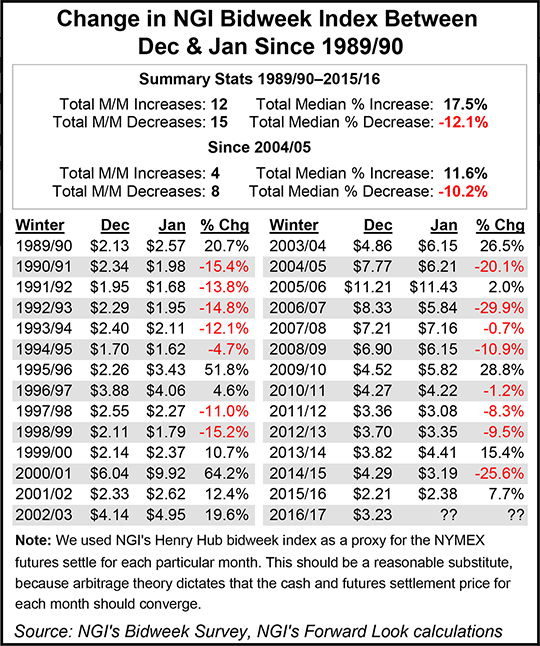 NGI did not publish data for Nov. 24 and 25 in observance of Thanksgiving.

Futures set the stage for the strong surge. The Nymex January contract jumped about 36 cents during that time to settle Dec. 1 at $3.505 as a weak cool blast continues to push across the eastern U.S. with a marginal increase in demand, although with mild temperatures returning Sunday through Wednesday, according to forecasters at NatGasWeather.

More importantly, the market is eyeing the strong winter storm and cold blast expected to track across the country next week, which is expected to bring the strongest demand of the season so far, the weather agency said. This will be followed by another milder break over the eastern U.S. the following weekend as cold air reloads over the West, readying for another advance into the eastern U.S. for mid-December.

“What appears to matter most is the coming pattern has proven cold enough to satisfy the nat gas markets as prices continue to rally. The question becomes how much higher can prices go before some sort of correction,” NatGasWeather said.

Apparently, not much higher. The Nymex January contract was already in the red Friday morning, trading about 9 cents lower by mid-day.

Still, stout increases made throughout the week are indicative of the increased volatility that has been evident the last several weeks in the natural gas market. As of Thursday’s close, January futures were 68 cents higher than the low established Nov. 8, and the Nymex December contract, which expired Monday, rolled off the board at $3.23, up 69 cents from the early November low.

The recent rally hasn’t been contained to the futures/forwards markets. Cash prices at the Henry Hub are up well more than $1 since that time, and December bidweek prices shot up 72 cents to average $3.20, the highest bidweek national average since February of 2015.

“December futures can sometimes settle higher than they otherwise would have, or where current fundamentals may suggest, simply because there is still the uncertainty about whether (and weather, pun intended) there will be enough storage to stretch across the rest of winter when the December contract expires in late November,” said Patrick Rau, NGI’s director of strategy and research. “During bidweek, buyers also have to price gas for all of December, and the second half of the month tends to be colder. That’s a big reason prices surged during bidweek this week, despite temperatures being fairly mild across the country in early December.”

Stated differently, Rau thinks December prices generally carry a bit of an option premium to account for the uncertainty that the coming winter will be colder than normal. “If you think in terms of options pricing models, option prices are always higher the longer the time until expiration, and the higher the volatility.

“Going into December, we still have four months until the expiration of the storage withdrawal season, so things are more unknown than they are going into January. Because things are more uncertain, volatility is higher, or at least perceived volatility is higher. Both of those are likely getting priced into the December futures settle every year, so everything else being equal, December probably should settle higher than January more often than not.”

The data seem to bear that out. Rau observed that since the 1989-90 winter season, the December futures price has settled higher than the following January price 15 times out of 27, and since 2004-05, that has happened even more frequently, closing higher eight out of the last 12 years.

“The shale revolution is probably having a heavy impact on this,” Rau concluded, since the increase in unconventional production has been leading to more robust storage balances heading into winter, and “has been taking away more of the fear that gas will not be as readily available winter-after-winter. With the U.S. having the ability to fill storage much more readily with all that extra production, it is now even more important for there to be an early start to winter. If December isn’t cold, it’s going to be more likely in this day and age that there will be enough gas to handle the rest of the winter, which isn’t constructive for the January contract.”

Indeed, storage inventories broke another record during this past refill season and remain above both the year-ago level and five-year averages.

The U.S. Energy Information Administration on Thursday reported a 50 Bcf draw from inventories for the week ending Nov. 25, slightly below market estimates. Inventories now stand at 3,995 Bcf and are 24 Bcf greater than last year and 235 Bcf more than the five-year average.

Luckily, it appears that the market is on the cusp of more sustained cold weather. In fact, the number of HDDs for this 2016-17 winter season will catch up to last year in about two weeks, but will still remain well below the 30-year average, NatGasWeather said.

Indeed, the most recent long-term forecasts are showing more bullish risk in the form of a sustained trough across the East that would keep heating demand elevated and likely work to balance the market, forecasters at Bespoke Weather Services said.

In fact, Bespoke expects Friday’s weakness in the Nymex to be “rather shallow” given the bullish risk in the forecasts.

“Even as prices retrace a bit following this rally, we have only seen bullish weather risk increase overnight, so we expect any pullback in price to not be all that long-lived unless some very preliminary bearish risk from Day 14 onwards begins to become higher conﬁdence,” Bespoke said. “This risk of colder weather has sent cash prices ﬂying, as Henry Hub cash closed yesterday around the $3.44 level, further supporting the front of the strip.”

Meanwhile, data and analytics company Genscape’s meteorological team is projecting a colder-than-normal second half of winter.

Generally, below normal temperatures are expected across the East when looking at the winter as a whole, the company said. Despite the overall cold signal, it is expected to be a slow transition from the prolonged warmth experienced this fall. “The December pattern looks to be volatile, with above-normal temperatures followed by brief cold snaps throughout the month, before the cold air outbreaks increase in both frequency and longevity for January and February,” Genscape said.

It’s a different story in the West. While most of the country is expected to see a bearish start to winter 2016-2017, California is expected to start the season with an anomalous cold pattern with peak heating demand occurring in the first half of December.

“In contrast to last year, weak La Niña shifts the subtropical jet into Northern California and the Pacific Northwest, where a continuation of anomalous fall 2016 precipitation continues through December. Warm anomalies then return to California by late December and persist through the end of winter,” Genscape said.

Not everyone is convinced of the colder weather to come. Tudor Pickering Holt, in a Friday market outlook, said it was lowering its 2017 price projection from $3.75 to $3.45 after replacing its previous expectation of a colder winter for 2016/17 with a “normal weather” assumption.

“Our previous inclusion of a colder-than-average winter ”16-’17 on the back of a La Niña weather pattern has not yet materialized and current three-month forecasts are calling for ~normal temperatures, leaving little support for a cold weather call,” TPH said.

Looking deeper into the forwards markets, while strong 30-cent-plus gains were prevalent across most markets, some mounted even steeper increases. New England was a particular standout as the two front months netted more than $1 during the Nov. 24-Dec. 1 period.

The surging prices come as Genscape projects demand in New England climbing to 2.97 Bcf/d Friday and then peaking at 3.1 Bcf/d Tuesday. Appalachia demand rose above 12 Bcf/d Thursday and remained there Friday, and Genscape shows it picking up about 0.4 Bcf/d through the weekend and headed towards a peak of 14.2 Bcf/d by Monday. Southeast/Mid-Atlantic demand is also expected to remain elevated, having crest the 15 Bcf/d-mark Thursday and running to 16.2 Bcf/d by Monday.

The Louisville, KY-based company also noted that a liquefied natural gas cargo is en route to New England, but Everett storage has enough gas in inventory to effectively prevent the cargo from unloading until space is cleared.