Differences of opinion between the natural gas and electricity industries over a possible restructuring of gas markets, which were voiced at an unusual roundtable meeting at FERC headquarters last month, are even more clearly delineated in dozens of post-conference comments filed this week [AD14-19-00]. 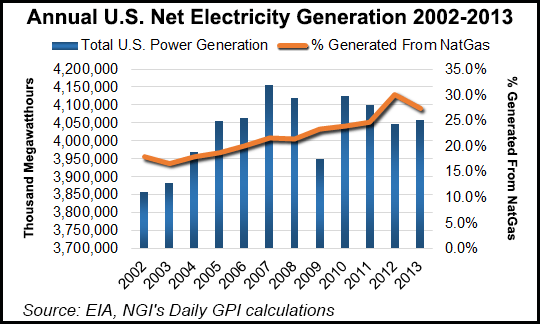 Many of the concerns expressed at last month’s meeting at Federal Energy Regulatory Commission headquarters in Washington, DC (see Daily GPI, Sept. 19) “arise as a result of gas-fired generation currently being used primarily as an intermediate or peaking resource, combined with the electricity market rules that determine whether and how generators are able to recover costs,” America’s Natural Gas Alliance (ANGA) said in its filing. Gas-fired generation is uniquely situated to provide the flexibility electric generators and grid operators need, ANGA said, but generators may not have the same flexibility when it comes to procuring gas on short notice or over weekends. The answer may not be a restructuring of gas markets, but a revamping of electricity market rules, according to ANGA.

“Given the abundant supply of natural gas and producers’ motivation to make that supply available to the market, the solution to alleviate concern lies with electricity market rule changes that will enable infrastructure enhancement and the development of portfolio management tools. Currently, there are opportunities to purchase and schedule gas on short notice or over the weekends — contract structures or products that provide additional scheduling flexibility exist now and can be developed…Pairing firm storage with firm pipeline capacity could also provide some level of ‘no notice’ storage which allows an electric generator to treat natural gas reserves in the same way a coal-fired resource relies on its inventory.”

Earlier this year FERC issued a notice of proposed rulemaking (NOPR) that would tackle the long-running and increasingly nettlesome issue of gas-power coordination by shaking up the natural gas day (see Daily GPI, March 20, March 27)

At last month’s meeting — which was called by Commissioner Philip Moeller and attended by no other commissioners — electric generators and grid operators, most of them from the Northeast, said they want natural gas markets and infrastructure altered to meet their peak demand needs. Gas pipelines and producers who rallied to defend their market made it very clear that they don’t think it needs radical changes. There was no indication of a softening in those positions in the comments filed since the meeting.

“Near the close of the conference, a suggestion was made that the unwieldiness of the capacity release rules under which all interstate pipelines function today might be complicating this responsiveness, and that one way of addressing this would be to relax those rules in certain circumstances, e.g., during peak winter days or hours when electric demands are most volatile,” Tenaska Marketing Ventures said in post-meeting remarks filed at FERC. “Tenaska believes that such a move would be ill-conceived, for a number of reasons.” Forces are already at work to solve market volatility problems, according to Tenaska, which operates through affiliates a fleet of gas-fired generation facilities and conducts one of the broadest wholesale gas marketing programs in North America.

“Reliable data exist to show that the use of capacity release — including capacity releases in the context of asset management arrangements — has been steadily increasing,” Tenaska said. In addition, the wholesale gas market is developing “tradable packages that should improve the options available to the natural gas-fired electric generation market and other temperature-sensitive loads, and that are deliverable without having to bend the established rules applicable to capacity use.” And new and expanded pipeline capacity will close gaps between what the electricity market needs and what the gas market and gas delivery system can provide, Tenaska said.

But electric generators and grid operators see the situation differently, calling on FERC to consider significant changes to natural gas markets. Saying its members had been adversely affected last winter “by the lack of transparency and liquidity in the trading of interstate natural gas pipeline capacity,” the PJM Industrial Customer Coalition asked FERC to issue an order requiring pipeline operators to answer a series of questions about capacity and trading and operational flexibility. The point “is that the Commission and affected stakeholders should be operating from the same information base when exploring means for better optimizing Commission-jurisdictional facilities,” PJM said.

At the center of much of the conversation at the Sept. 18 meeting was a proposed natural gas trading platform. According to the Electric Power Supply Association (EPSA), that idea has not been sufficiently developed yet. “Consequently, at this point EPSA believes the concept needs better definition and a demonstration that the concept will, in fact, benefit both the gas and electric industries before it can be further discussed by those who might consider its use as a customer or seller.”

Moeller convened the Sept. 18 meeting to explore the concept of developing an electronic information and trading platform for natural gas that would contain bids and offers for the purchase and sale of both commodity and capacity for receipt and delivery points across multiple pipeline systems (see Daily GPI, Aug. 20). At the end of the nearly three-hour session, Moeller said FERC is unlikely to take any drastic action anytime soon to resolve the differences. But, Moeller said, it would be better to solve differences between gas markets and northeast power generators by agreement now than to wait for FERC or Congress to mandate a solution.

Responding to FERC’s NOPR, the North American Energy Standards Board (NAESB), which includes representatives from throughout the gas industry, has filed with FERC a proposed revised timeline for natural gas nomination cycles with the nomination deadline for the timely and evening cycles the same as those in the NOPR. That is 1:00 p.m. central clock time (central) and 6:00 p.m. central, respectively. The timelines for intraday 1, intraday 2, and intraday 3 vary from those proposed in the NOPR (RM14-2) and the nomination deadlines would be at 10:00 a.m., 2:30 p.m., and 7:00 p.m., all central time. The NAESB standards will not include an intraday 4 cycle, nor did it mention a Gas Day start time. The FERC NOPR proposes changing the start of the gas day from 9 a.m. to 4 a.m. central (see Daily GPI, Sept. 19,Sept. 23).