Gas for delivery Friday on average moved little in Thursday’s trading as most players elected to get their trades made ahead of the release of Energy Information Administration (EIA) storage figures. 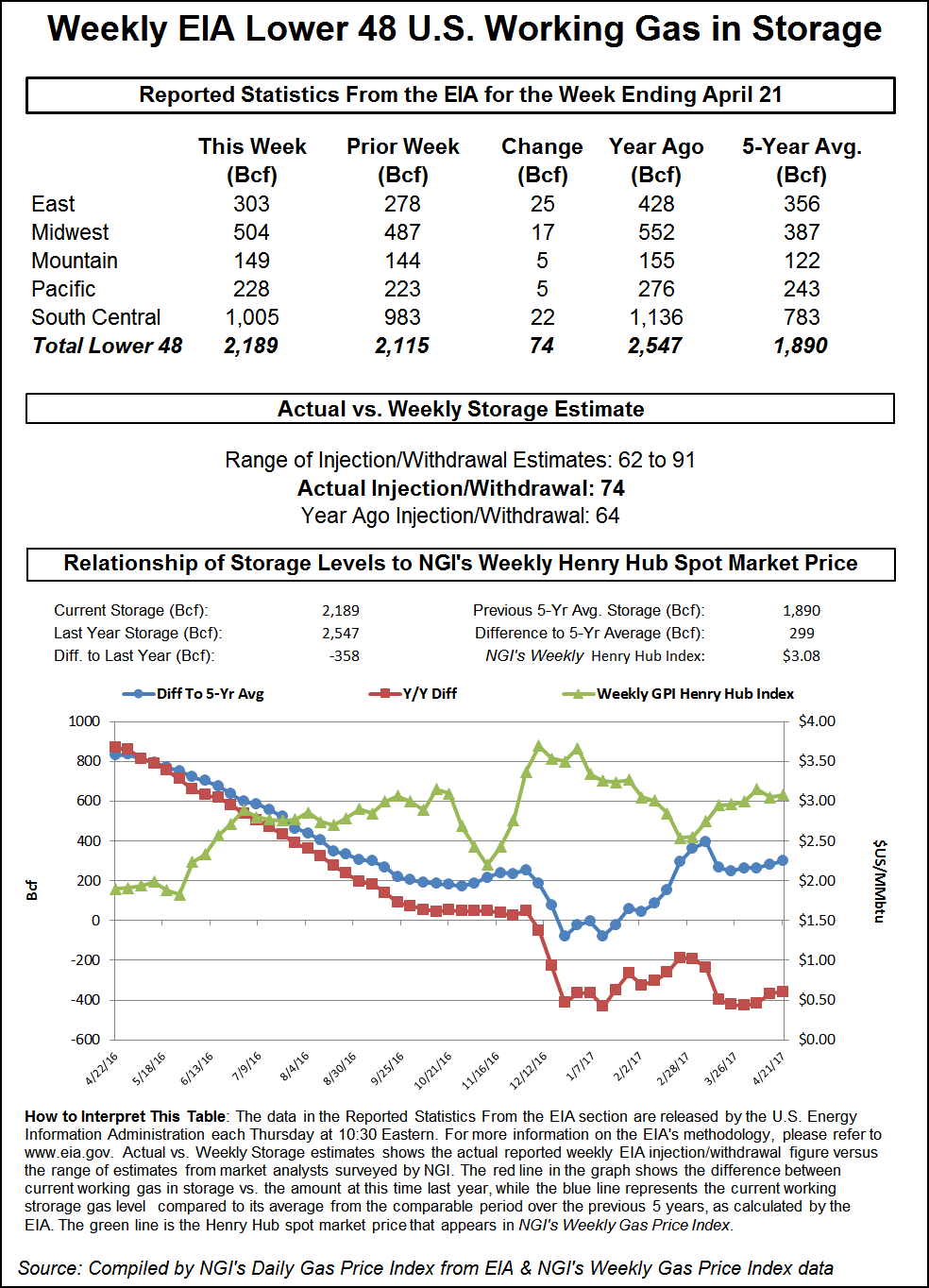 Gains at South Louisiana, the Southeast, and California were able to offset weakness in the Northeast and Appalachia, and the NGI National Spot Gas Average was unchanged at $2.87.

The EIA reported a storage increase of 74 Bcf, just 2 Bcf greater than the industry consensus and the trading in futures was equally lackluster. At the close June futures had slipped 3.2 cents to $3.239 and July was down 3.0 cents to $3.320. June crude oil fell 65 cents to $48.97/bbl, the first settlement below $49 in a month.

Before the number was released, Citi Futures Perspective predicted a build of 63 Bcf and Tradition Energy was expecting a 77 Bcf increase. A Reuters survey of 18 traders and analysts revealed an average 72 Bcf injection with a range of 62-91 Bcf.

In the same week last year, 64 Bcf was injected and the five-year pace is for a 57 Bcf build.

“The market didn’t move much and failed to take out the day’s highs or lows when the number was released,” said a New York floor trader. “I think you have to look at $3.15 support and $3.35 on the upside. We just rolled from May to June, so we’ll have to see if we can hold these levels.”

May futures expired Wednesday at $3.142.

Analysts see the pattern of outsized builds continuing. “The build for last week was slightly more than the 72-73 Bcf consensus view, a minor miss that doesn’t really constitute a surprise,” said Tim Evans of Citi Futures Perspective. “However, this report does nonetheless confirm that the background supply/demand balance has weakened relative to late March and early April, a bearish development in terms of our model. We’ll be looking for somewhat more robust storage injections in the weeks ahead as a result.”

“We believe the storage report will be viewed as neutral,” said Randy Ollenberger of BMO Capital Markets. “Storage is trending below last year’s levels; however, rising associated gas production should keep U.S. storage levels at, or above, five-year averages, assuming normal weather.”

Inventories now stand at 2,189 Bcf and are 358 Bcf less than last year and 299 Bcf greater than the five-year average. In the East Region 25 Bcf was injected, and the Midwest Region saw inventories rise by 17 Bcf. Stocks in the Mountain Region were greater by 5 Bcf and the Pacific Region was up 5 Bcf. The South Central Region increased 22 Bcf.

De-rating of the Algonquin Gas Transmission’s line between the Stony Point and Cromwell compressor stations was not in play for Friday gas deliveries, and New England prices were the day’s greatest movers, posting solid double-digit declines.

Cleaning tool runs between Algonquin Gas Transmission’s Stony Point and Cromwell Compressor stations scheduled for Thursday and Saturday appeared to put upward pressure on New England price points east of the station in Wednesday’s trading. The maintenance is expected to cap capacity through Stony Point at 800 MMcf/d, down from an average 1.5 Bcf/d over the past week, according to natural gas analytics firm Genscape.

Prices at major trading hubs were generally within a few pennies of unchanged. Deliveries to Dominion South fell 6 cents to $2.41 and gas at the Chicago Citygate dropped 2 cents to $2.91. Gas at the Henry Hub rose a nickel to $3.07 and gas on El Paso Permian changed hands flat at $2.64.

Kern Receipts came in 2 cents higher at $2.70 and gas priced at the SoCal Border Average gained a penny to $2.76.

With one day left of May bidweek trading indications are that prices will have a hard time matching the exuberance of April’s 49 cent surge to $2.92. Bidweek quotes are coming in about a nickel lower at most points, excluding the Northeast, which is up about a nickel. The NGI National Bidweek Average is about $2.88, down 4 cents.