After consecutive daily gains going back to last week, U.S. natural gas futures reversed sharply Wednesday as estimates pointed to a larger-than-average build in upcoming weekly storage data. In the spot market, with more intense cooling demand not expected until next week, discounts were widespread across the Lower 48; the NGI Spot Gas National Avg. skidded 9.5 cents to $2.210/MMBtu. 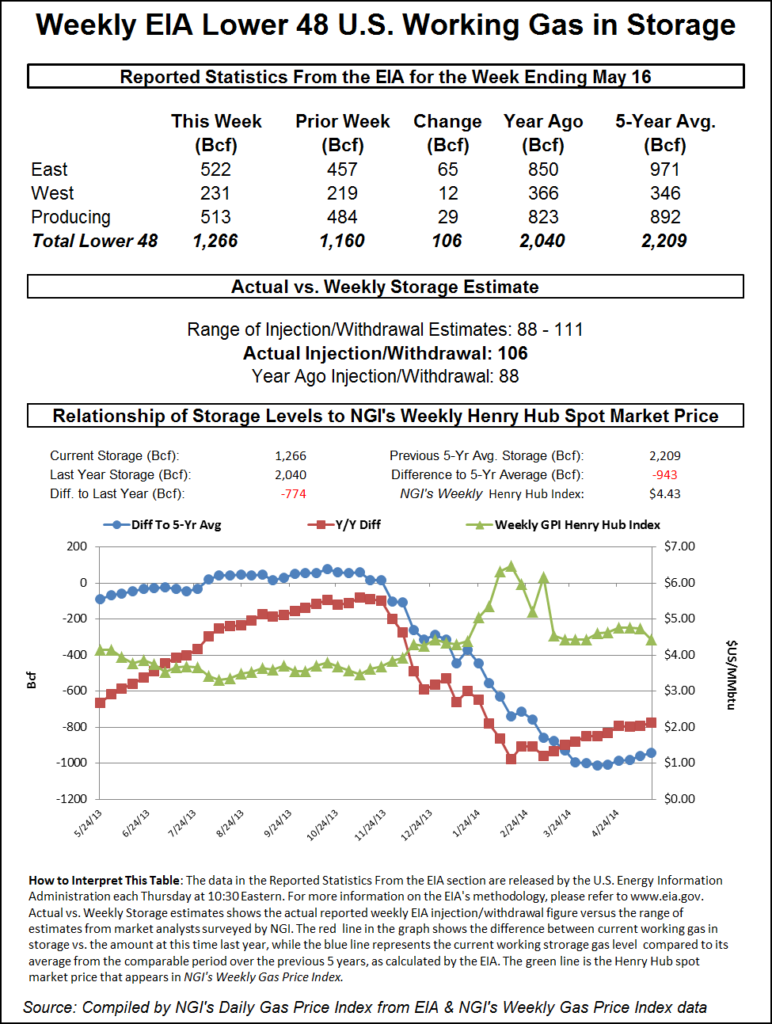 The prospect of a hefty triple-digit storage injection from the Energy Information Administration (EIA) may have provided the impetus for those responsible for recent buying in the market to make an exit Wednesday, according to INTL FCStone Financial Senior Vice President Tom Saal.

“The profiles look like there has been some steady buying, and it might be people hedging storage,” Saal told NGI. “You’re buying the front of a contract and then selling the back end. So that storage hedge may be part of the buying. Could be some short-term speculative buying, but I’ve got my doubts about that.”

However, Wednesday’s “action I think is just a retracement from the move off the lows” recorded in late April. “From the profile here, it looks like it’s long liquidation. So whoever was buying it may have just gotten out” on Wednesday “because they’re concerned about the storage report” set for Thursday.

The sell-off Wednesday came even as the latest production data continued to show maintenance-related declines. Genscape Inc.’s Lower 48 production estimate remained “notably lower” for a second straight day Wednesday. Although Tuesday’s production estimate was revised more than 1 Bcf/d higher to 87 Bcf/d, it was still nearly 1.1 Bcf/d below the average from the previous three days, according to the firm.

While also subject to an upward revision, Wednesday’s estimate came in “even lower” at 85.95 Bcf/d, driven by continued short-term declines in the Northeast and Rockies regions (each down about 375 MMcf/d day/day), along with drops of 100 MMcf/d or more in Texas and the Gulf Coast, Genscape senior natural gas analyst Rick Margolin said.

In addition to the numerous pipeline maintenance events that contributed to Tuesday’s production dip, new maintenance events were expected to start Wednesday on the Columbia Gulf, Dominion, El Paso Natural Gas, Texas Eastern Transmission and Wyoming Interstate Co. systems, according to Margolin. High Point Gas Transmission in the Gulf of Mexico and KPC in the Midcontinent were also experiencing unplanned disruptions, he said.

South Central storage, which is the closest and therefore most relevant storage facility for Mexico, increased by 32 Bcf for the week ending May 10, it’s fourth consecutive decline.

“The figure was down a bit from the 43 and 42 Bcf figures turned in the previous two weeks, which is likely the result of increased cooling demand in Texas and the U.S. Southwest,” said NGI’s Patrick Rau, director of strategy and research. “Storage in the region remains 42 Bcf ahead of last year, but still a good 111 Bcf below the previous five-year average.”

Hotter temperatures stretching from Texas to the Mid-Atlantic through the end of the current week produced only modest adjustments for day-ahead prices Wednesday. In the Southeast, Transco Zone 4 shed 1.5 cents to $2.530. In East and South Texas, most locations posted discounts. Katy slumped 7.5 cents to $2.605.

In West Texas, meanwhile, basis differentials strengthened nearly across the board, with constrained Permian Basin producers possibly seeing some pricing benefits from hotter temperatures in the Lone Star State. After gaining 30.5 cents in trading Tuesday, Waha picked up another 9.5 cents Wednesday to average 86.0 cents.

In a rare interview with media, the new head of Mexico’s Cenagas pipeline operator, Elvira Daniel, told Mexico’s Radio UNAM on Tuesday that once the CEO of state power company ComisiÃ³n Federal de Electricidad (CFE) Manuel Bartlett renegotiated the take-or-pay clauses of contracts that it holds with natural gas pipeline developers, Cenagas would assume control of CFE-anchored pipelines to create an integrated pipeline system of “all the public and private pipelines” in Mexico.

“I’m sure he’s going to do it,” Daniel said during the interview, referring to Bartlett and the pipeline renegotiations. “He’s one of the most capable people in the administration.”

In other news, Spanish company Iberdrola said it was starting construction this year on $5 billion worth of power projects in Mexico, including a combined-cycle plant in Tuxpan in Veracruz, and a cogeneration plant in San Juan del RÃ­o in QuerÃ©taro.

Meanwhile, in his daily press conference on Thursday morning, President LÃ³pez Obrador said that Mexico would not engage in hydraulic fracturing because it pollutes and uses too much water.