Most physical natural gas traders hunkered down Thursday and got their deals done ahead of the often volatility-inducing Energy Information Administration (EIA) inventory report. 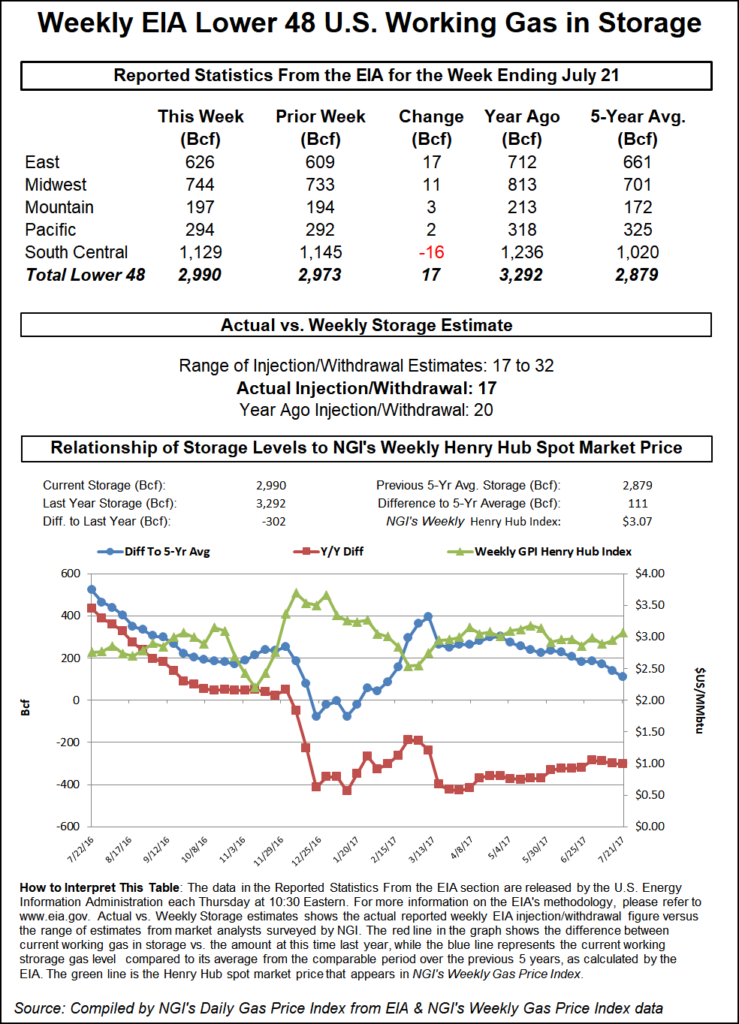 Physical prices moved little as modest gains in the Northeast, Appalachia, and the Midwest offset weakness in California and flat pricing in the Midcontinent. TheNGI National Spot Gas Average gained was flat at $2.64.

The EIA reported a storage build far below expectations at just 17 Bcf, about 7 Bcf less than what traders were looking for. At the close the expired August contract added 4.5 cents to $2.969 and September had risen 5.3 cents to $2.967. September crude oil gained 29 cents to $49.04/bbl, its fourth straight gain for the week.

August futures got a quick shot of adrenaline following a report Thursday by the EIA showing a storage injection that was significantly less than the market was expecting. The 17 Bcf was about 7 Bcf less than consensus estimates. When the number rattled across trading desks, the expiring August futures rose to $2.998, but at 10:45 a.m. August was trading at $2.970, up 4.6 cents from Wednesday’s settlement. The soon-to-be-spot September contract had risen 6.3 cents from Wednesday to $2.977.

Before the report was released, traders were looking for a storage build far higher than the actual figures. Last year 20 Bcf was injected and the five-year average stands at 47 Bcf.

Tim Evans of Citi Futures Perspective said, “This was a second consecutive bullish miss relative to consensus expectations and supportive relative to the 47 Bcf five-year average for the week ended July 21. While the report doesn’t provide background fundamental data on supply or demand factors, our guess is that this represents a higher rate of power sector consumption than anticipated.”

In the East Region 17 Bcf was injected, and the Midwest Region saw inventories rise by 11 Bcf. Stocks in the Mountain Region were greater by 3 Bcf and the Pacific Region was up by 2 Bcf. The South Central Region fell by 16 Bcf.

Near term temperature forecasts called for below normal readings in major markets. Wunderground.com forecast that New York City’s Thursday high of 77 would reach 81 Friday and settle back to 73 on Saturday, 11 degrees below normal. Chicago’s Friday peak of 83 was predicted to recede to 80 Friday and 79 Saturday, 5 degrees less than its seasonal norm.

The National Weather Service in Chicago said, “One more afternoon of muggy conditions will come to an end as a large area of high pressure builds southeast into the Midwest tonight.

“Behind the front a seasonally cool and much drier airmass will take up residence across Northeast Illinois and northwest in Friday and through the weekend. The surface high will be north of the area, and this will maintain a Northeast and cooler wind, along with continued higher waves along the shore, despite generally sunnier skies. Comfortable highs will top in the 70s to near 80.”

Gas at the Chicago Citygate changed hands a penny higher at $2.79 and deliveries to the Henry Hub were unchanged at $2.92. Gas on El Paso Permian was flat at $2.65 and packages priced on Northern Natural Demarcation shed a penny to $2.73.