Physical natural gas for next-day delivery worked lower Thursday as traders made sure their deals were done by the 10:30 a.m. EST release of inventory data by the Energy Information Administration (EIA). 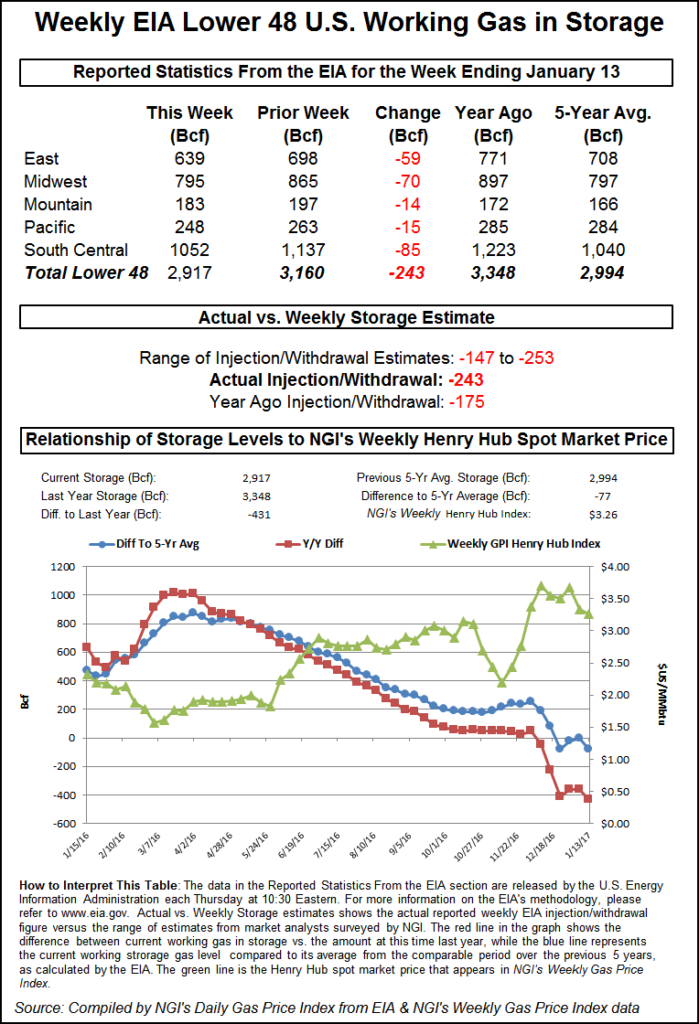 Only two points followed by NGI scored gains, and all other points were down about a nickel. Losses in the Northeast, Rockies and California were somewhat greater than other market points, and the NGI National Spot Gas Average shed 6 cents to $3.11.

Futures hesitated following the release of storage data, which showed a withdrawal of 243 Bcf, about 12 Bcf greater than expected. But by the close February had added 6.6 cents to $3.368 and March was higher by 6.6 cents as well to $3.360. The about-to-expire February crude oil contract gained 29 cents to $51.37/bbl.

Once the bullish EIA report rattled across trading desks natural gas futures tried to work higher. February futures reached a high of $3.336 immediately after the figures were released, and by 10:45 a.m. February was trading at $3.314, up 1.2 cents from Wednesday’s settlement.

“The market really didn’t do much, and struggled to get above resistance at $3.31,” said a New York floor trader. He added that additional market buying could take the market to the “next level” at $3.35 to $3.37.

“The 243 Bcf net withdrawal for last week was more than the final survey expectations, but not out of the range of estimates,” said Tim Evans of Citi Futures Perspective. “This was the largest draw of the season to date, exceeding the 237 Bcf decline in the week ended Dec. 23. It was also supportive relative to the 170 Bcf five-year average for the date, and so supportive on a seasonally adjusted basis.

“While this report was more supportive than anticipated and does go some way toward showing a somewhat tighter supply-demand balance, smaller and somewhat bearish storage withdrawals are still likely over the next two reports, limiting the upward price potential.”

Randy Ollenberger, an analyst with BMO, also had an upbeat take on the figures. “We believe the storage report will be viewed as positive. Storage has dropped to five-year average levels, and we believe that U.S. working gas in storage could trend toward five-year lows by the end of the 2017 winter withdrawal season, assuming normal weather,” he said in a report to clients.

Inventories now stand at 2,917 Bcf and are 431 Bcf less than last year and 77 Bcf less than the five-year average. In the East Region 59 Bcf was withdrawn and the Midwest Region saw inventories decrease by 70 Bcf. Stocks in the Mountain Region fell 14 Bcf, and the Pacific Region was down 15 Bcf. The South Central Region dropped 85 Bcf.

Weather models overnight turned ever so slightly cooler. “Over the past 24 hours, the models have weakened next week’s big warmth, and that is driving the majority of the small demand gains this morning,” said Matt Rogers, president of Commodity Weather Group in a Thursday morning report to clients.

“Slightly colder changes are noted for the Midwest, East and South (even the West at times). Otherwise, the models still show the pattern transition toward a colder direction for the 11-15 day, but the jet stream configuration really struggles to stabilize. The areas most likely to see colder than normal temperatures by late six-10 day into the 11-15 day are again the West and South. The Midwest only manages to get back toward a normal range at times, with the East Coast slowly transitioning to normal and then slightly below by late period.” 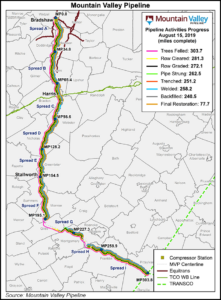