While they have caused an abrupt increase in the numbers of wells awaiting completion, North Dakota rules imposed earlier this year to capture associated natural gas at the wellsite are cutting the amounts of flared gas, the state’s chief oil and gas regulator said. 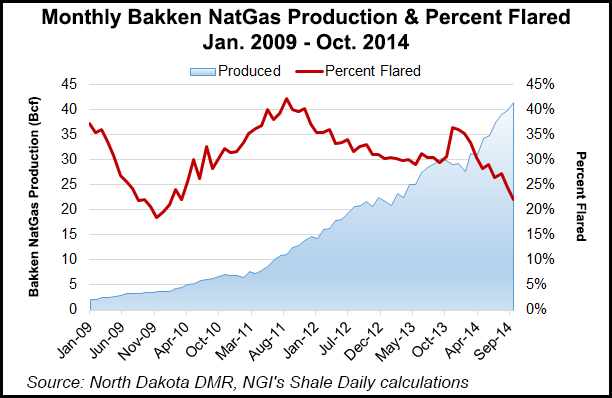 Operators are foregoing many well completions to concentrate on the gas capture requirements, and low oil prices may add to this trend, said Department of Mineral Resources (DMR) Director Lynn Helms last Friday.

In October, the statewide capture rate was 78%, meaning flaring was down to 22%, well below its recent monthly totals of 30% or more. The state mandated level for October was 74% capture of associated gas with the state’s still-robust oil production.

Sixty of 68 operators were in compliance with the Industrial Commission (IC) capture goals, according to Helms. The operators in compliance have achieved a 74% or better capture rate, but the other eight were below that that target.

As many as four of the operators out of compliance may be facing restricted production of wells when the January 77% target goes into effect, Helms said. “We’ll check in January to see how they are doing.”

In tandem with the flaring success, North Dakota’s record-breaking oil production pace is slowing and will ramp down even more in the face of falling global oil prices, but the state is unlikely to face the shut-in of its nearly 12,000 producing wells, Helms said. Instead, the current trend of operators delaying the completion of wells will grow, he added.

The latest statistics for October represent the first time in about eight months that no production records were set in North Dakota, Helms said. The state usually has seen production records in the pre-winter months but he cited three downward pressures on production — prices, gas capture rules and the state’s new oil content requirements for shipping (see Shale Daily, July 2; Dec.11).

While the economics for operators would prevent existing wells from being shut in, the number of incomplete wells is likely to grow. “There is a good possibility that the 650 currently not completed wells could be left in that state for some time,” he said. “There are not a lot of incentives to bring them online right now.”

Helms said DMR is working with the eight operators that missed the October gas capture target. One operator, Zavanna LLC, recorded an October capture rate of 39%. “The company is building a new gas plant in the Stoney Creek area that was scheduled to be operating in September, but it is only now close to coming online,” he said.

“This is the type of thing we knew we would run into with companies when the rules went into effect. The Zavanna plant’s initial capacity is 45 MMcf/d, expandable to 90 MMcf/d, and it is a key piece of infrastructure in the Williston area.”

Among the eight operators out of compliance, Helms said several are “really close,” and we need to analyze whether they are calculating their captures correctly, but overall we have obtained really good compliance with 60 of 68 companies in full compliance.”

Another of the noncompliant companies was Kodiak Oil and Gas Corp. at 70% capture, but it recently merged with Whiting Petroleum Corp., which is in compliance at better than 74%, Helms said.

Helms emphasized that DMR is doing the calculations to determine what companies are in compliance. Producers report on a monthly basis to DMR the amount of production, gas sold, gas flared, etc., and part of the audit is to “make sure the numbers are not being gamed,” he said. DMR requires separate reports from producers, transporters and purchasers in verifying the production numbers each month.

Helms said for most operators their well cost is about $9 million/well, with $4 million for drilling and $5 million for completion. “While they have $4 million sunk in an individual well, there is not a lot of incentives to spend another $5 million and produce that first high-production run rate for $41.00/bbl oil.”

As a result, “there is going to be a tendency” to leave the wells uncompleted, which can be done in North Dakota for up to a year. “That could, and probably will happen, with some wells,” Helms said.

For existing producing wells, operators have indicated that they want to maintain cash flow as much as possible and are not likely to shut in those wells, Helms said. “The day-to-day cost of pulling a barrel up out of the ground and marketing it is less than $15/bbl, so we would have to reach those kind of price levels before they actually started to close wells in and sacrifice cash flow.”

When oil prices are falling, another incentive for leaving wells incomplete is the prospect of prices getting low enough to trigger an exemption from the state extraction taxes for the wells’ subsequent production. That exemption expires July 1, so there is further incentive to keep the currently uncompleted wells in that state, Helms said.