With continued emphasis on drilling in the more natural gas-prone Bakken Shale core, demand for gas takeaway capacity will keep growing, according to Justin Kringstad, director of the North Dakota Pipeline Authority. 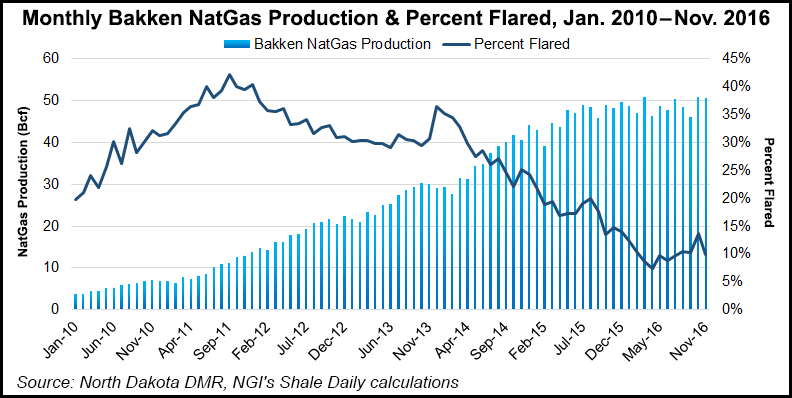 “The number of wells being connected to gas gathering lines has outpaced the number of new producing wells being brought online monthly for the last months of 2016,” Kringstad said during a Baird financial conference call Friday. “However, more pipeline capacity is required to lower the flaring rate further.”

Kringstad said 80% of the flared gas comes from wells that are already connected to gathering pipelines, a clear indication that there is not enough takeaway capacity to accommodate increasing gas production associated with the oil being produced from the four core Bakken counties (Dunn, McKenzie, Mountrail and Williams).

Gas production this year is expected to grow even as oil production declines, as was the case several months last year. And as other state energy officials have been reporting in recent months, breakeven costs will vary greatly depending on the location of wells.

“Due to higher-than-average gas-oil ratios in the core portion of the Bakken oil and slightly shallower decline rates, overall natural gas production is expected to grow over the next year at a faster pace than crude oil,” Kringstad told NGI‘s Shale Daily.

“Additional natural gas production in the region will need to be met with additional gas gathering and processing infrastructure.”

For the purposes of his presentation, Kringstad assumed continued well costs in the range of $6-8 million/well, wellhead prices for oil and gas staying above $45/bbl and $2/Mcf, respectively, zero flaring, and internal rates of return (IRR) of 10-20% to drill after production taxes and royalties. Some analysts’ put the current Bakken IRR at 27%.

In contrast, natural gas liquids (NGL) will continue to be an even bigger infrastructure challenge, Kringstad said, because the plants and logistics are more complicated. In addition, market pricing is volatile, the pipelines can only move specific NGL, and there is much uncertainty on how much NGL production will come from Wyoming and Canada.

A combination of factors could help mitigate this situation, according to Kringstad, who cited new, expanded or re-purposed pipelines and the development of a local petrochemicals industry in North Dakota as two possibilities. Others include the development of creative market solutions in processing plants, enhanced oil recovery, and more rail movement of excess NGLs.

The bottom line is that gas production will continue to outpace oil in North Dakota, particularly in the four core counties of the Bakken, he said.