The North American Climate, Energy and Environment Partnership announced Wednesday in Ottawa, Canada, has much to say about “clean power generation,” renewable energy and efficiency but barely a word about natural gas, save for methane emissions reduction goals in the “oil and gas sector.” 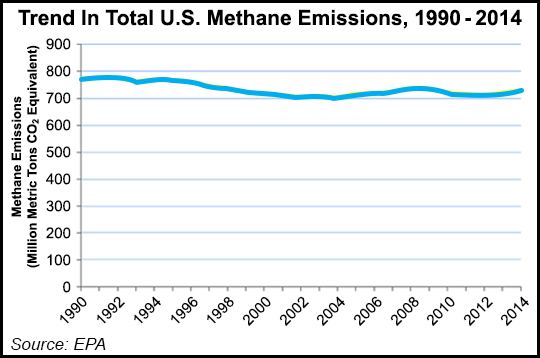 The leaders of Canada, the United States and Mexico announced the goal of 50% clean power generation in North America by 2025 at the North American Leaders Summit. Clean energy development is to be advanced, including renewable, nuclear, and carbon capture and storage technologies. Also called for is development of cross-border power transmission projects to move renewable electricity. Increasing appliance and equipment efficiency also is among the goals.

However, the words “natural gas” do not appear in the plan outline on the White House website. The only mentions of natural gas are as “oil and gas” in references to emissions — part of the problem, not the solution.

Under the partnership, the three nations would “reduce methane emissions from the oil and gas sector, the world’s largest industrial methane source, 40-45% by 2025…The three countries commit to develop and implement federal regulations for both existing and new sources as soon as possible to achieve the target. We intend to invite other countries to join this ambitious target or develop their own methane reduction goal.”

The countries intend to encourage oil and gas companies to join international efforts, such as the Climate & Clean Air Coalition’s Oil and Gas Methane Partnership, and the Global Methane Initiative. National methane-reduction strategies that target sectors such as oil and gas, agriculture, and waste management, would be encouraged.

“These agreements reflect an unprecedented alignment between the three countries, with Mexico showing clear leadership in expanding on U.S.-Canada methane action,” said Environmental Defense Fund President Fred Krupp. “Cutting oil and gas methane pollution is one of the fastest, most cost-effective ways to slow the rate of current [global] warming, while we work toward a clean energy future. And we’ll get to that goal faster thanks to the three leaders agreeing to a strong target for clean power across all of North America.”