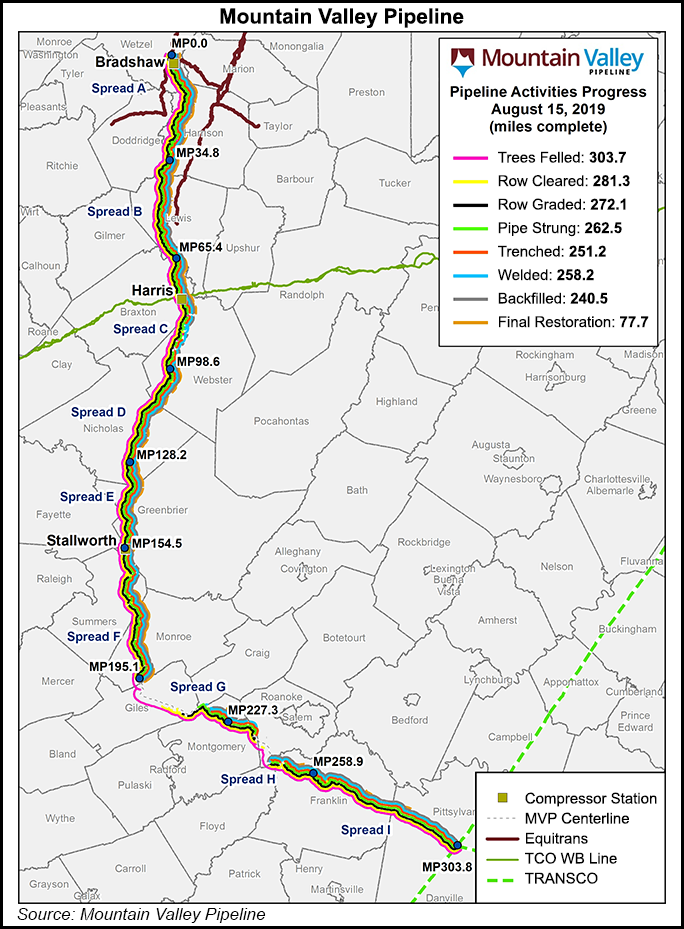 The DEQ “has determined that the proposed MVP Southgate project is inextricably linked to, and dependent upon, the competition of the under-construction” MVP mainline, the DEQ’s S. Daniel Smith, director of the Division of Water Resources, wrote in a letter to the developers. “…Approving construction activities and thereby allowing the most adverse environmental impacts — without certainty of the project’s utility upon completion — is inconsistent with principles of minimization.”

Since receiving a FERC certificate in late 2017, MVP has run into numerous legal and regulatory snags, including a ruling by the U.S. Court of Appeals for the Fourth Circuit last year to stay crucial Endangered Species Act approvals for the project.

MVP backer EQM Midstream Partners LP said earlier this summer that construction of its mainline — a 2 million Dth/d, 303-mile line designed to deliver Marcellus and Utica shale gas from West Virginia to an interconnect with the Transcontinental Gas Pipe Line in Pittsylvania County, VA — is 92% complete.

“For more than two years, the MVP Southgate team has worked diligently with stakeholders, including local, state and federal officials, to develop the most efficient, least impactful route for a project that the North Carolina Utilities Commission and Federal Energy Regulatory Commission have recognized is needed,” Day said.

“…The FERC’s certificate for MVP Southgate explicitly precludes work from starting on MVP Southgate until work resumes on the Mountain Valley Pipeline. The MVP Southgate team is currently evaluating its options but continues to target bringing this important project into service in 2021 to meet public demand for natural gas in southern Virginia and central North Carolina.”

The MVP Southgate extension, which would consist of 75 miles of 16-inch and 24-inch diameter line that would effectively extend the MVP project’s reach into North Carolina, received a final environmental impact statement from FERC in February. The pipeline would receive gas from MVP in Virginia and transport it to new delivery points in Rockingham and Alamance counties, NC.

The project is backed by a commitment from utility PSNC Energy, which is now Dominion Energy following a merger with parent Scana Corp. earlier this year.

Perhaps feeling emboldened by the cancellation of the Atlantic Coast Pipeline, a project that bore many similarities to MVP, environmental groups cheered North Carolina’s denial of the Southgate permit.

“The state has made clear that dangerous gas pipelines that threaten rivers, streams, wetlands and other priceless water resources have no place in North Carolina,” said the Natural Resources Defense Council’s Luis Martinez, who directs Southeast Energy for the group.

“Denying this key permit is a decisive victory for water quality, the environment and the health and safety of North Carolinians. This decision demonstrates that North Carolina can and must quit its harmful addiction to dirty fossil fuels. MVP Southgate has always been a bad deal for North Carolinians – it should be shelved for good.”