In an ongoing effort to optimize capital spending amid the weak oil price environment, MPLX LP brought online the first segment of the Wink-to-Webster pipeline to ultimately transport more than 1 million b/d of Permian Basin crude to the Houston area. 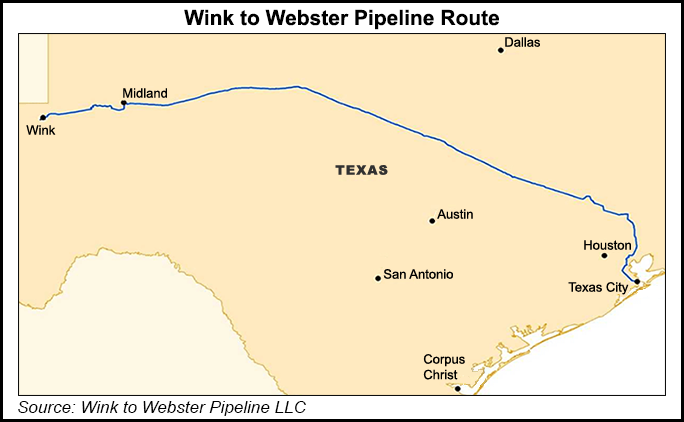 The main segment of the 650-mile pipeline was commissioned in October, and service is expected to be available for shippers by the end of the year. Additional segments are expected to be placed in service throughout 2021.

Speaking Monday on the 3Q2020 earnings call, CEO Michael Hennigan said the joint venture partners in the project looked at how they “could optimize capital spending” during the final months of what has been an unprecedented year in the oil and gas industry. With the early completion of the main segment from Midland, TX, to Houston, they opted to bring that portion of the system online ahead of time.

“It’s part of the optimization process. Instead of waiting for the whole thing, there is a piece of the project that could start up sooner,” Hennigan said.

MPLX has a 15% equity stake in the project, with the full capacity under minimum volume commitment (MVC) contracts. Delek US, Rattler Midstream LP, ExxonMobil, Plains All American Pipeline LP and Lotus Midstream LLC are co-sponsors.

There was barely a mention of another Permian takeaway project, the Whistler natural gas pipeline that would transport 2 Bcf/d. However, management indicated Whistler is on track to start up in the second half of next year. More than 90% of the project is committed with MVCs.

West Texas has been one of the bright spots for MPLX in the gathering and processing (G&P) segment. The midstreamer indicated that West Texas was one of only two regions that reported higher G&P volumes in the third quarter. Gathered volumes in the basin rose 3% year/year.

The Marcellus Shale also was a source of growth for MPLX. Gathered volumes averaged 1.3 Bcf/d in the third quarter, also up 3% year/year. Processing volumes increased 8% year/year to a record 5.7 Bcf/d. Fractionated volumes jumped 10% to 477,000 b/d as the Hopedale 5 fractionator began operations in the quarter. This drove total fractionated volumes to an average 567,000 b/d, up 4% over 3Q2019.

Despite the pressure on commodity prices, MPLX management remains optimistic in the outlook for natural gas and natural gas liquids (NGL) demand and price recovery. CFO Pamela Beall said the recent recovery in futures prices is “beneficial” for MPLX’s natural gas and NGL producer customers, “as they can take advantage of hedging opportunities and realize a positive impact on operating results, as well as their borrowing base redetermination.”

Beall said she expects producers would “continue to apply the benefits of an improving price environment to their balance sheets to address near-term debt maturities and improve their financial flexibility.”

The CFO acknowledged that “it’s been, certainly, very challenging for the producer customers across all of our geographies” but management has “been pleased to see some of the reports from producers that have been coming out.” Furthermore, with natural gas prices moving back up to $3.00/MMBtu, the company expects the higher priced environment to be “very supportive” for the G&P segment.

“We are running at very high volumes in our Marcellus area,” Beall said. There is some capacity that could fill up in the Utica Shale as well, and the Smithburg 1 processing plant is ready to take gas “at the appropriate time.”

That said, many exploration and production companies are looking at a slower growth trajectory, “whether it’d be in the Northeast or in the Permian or any other areas,” according to Hennigan. At the same time, the CEO said because of the recent price uptick, natural gas should continue to be an important part of the energy landscape long term.

“We’re looking at $3-plus natural gas pricing now compared to where we were six months ago, and I think there is a different outlook going forward that also blends into the evolving energy landscape,” Hennigan said.

With mergers and acquisitions (M&A) gaining momentum in the upstream sector, MPLX management said it was encouraged by the consolidation by producers, “which should result in counterparties with a stronger financial profile.” However, Beall said the company doesn’t “have a currency that I think would be very effective in consolidation.”

While MPLX would evaluate opportunities moving forward, its priority in the near term is to use free cash to buy back units and “keep our debt in check here.” Management is “not going to be blind to what’s happening in the space,” but how consolidation shakes out in the midstream space is “difficult to predict,” Beall said. “I’m not saying that we are actively engaging in M&A at this point in time, but certainly we’ll keep an eye on how that unfolds.”