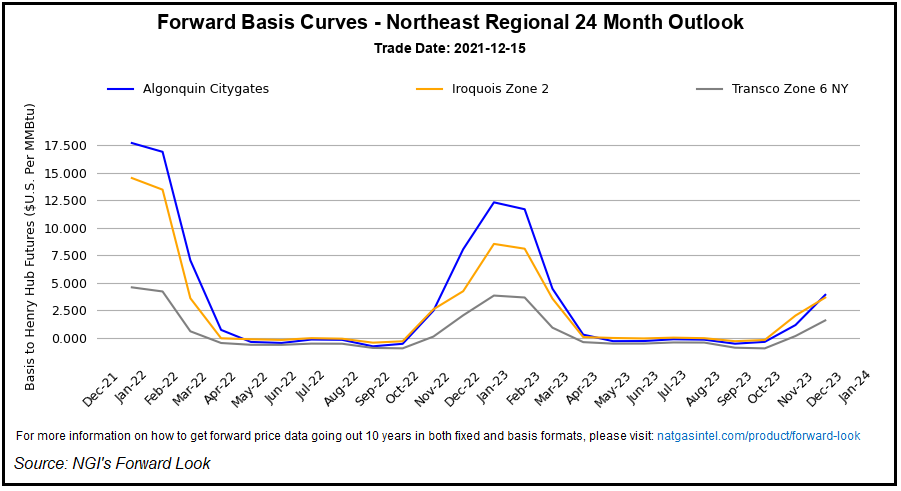 A 1.3-cent week/week fixed price discount for the Henry Hub prompt month saw many Lower 48 points trade within five to 10 cents of even for the period for January delivery, with the pipeline-constrained Northeast the most notable exception.

Aside from a brief foray above the $4.00/MMBtu mark, Nymex natural gas futures largely stayed within the confines of the $3.700-4.000 range for the period, extending the trend into Thursday’s session, when the January contract settled at $3.766, off 3.6 cents. Prices for January continued to slide in Friday’s trading, off another 7.6 cents to settle at $3.690.

“Anemic immediate-term demand is likely to yield the first sizable storage surplus versus the five-year average since April — with an emerging weather-driven surplus undercutting the likelihood for January to rise materially above $4,” EBW Analytics Group senior analyst Eli Rubin said in a recent note to clients.

Energy Aspects said its modeled end-March 2022 storage level has swollen to 1.71 Tcf from 1.58 Tcf at the start of the heating season as “lost heating demand” has loosened supply/demand balances “already undone by higher-than-expected production.”

The firm said its estimate for winter residential/commercial demand has declined by 1.3 Bcf/d since the start of November, equating to 200 Bcf left in storage caverns by the end of 1Q2022.

“A white Christmas, or a blue weather map for the U.S., seems far off still, and the market will likely keep $4 peak-winter forwards at bay until any such cold reveals itself,” Energy Aspects said.

Of course, December temperature trends do not offer a reliable gauge of what the remainder of winter could bring, a fact borne out by notable extreme weather events in recent years, EBW’s Rubin noted.

“There was little forewarning to the magnitude of the 2014 Polar Vortex, 2018 Bomb Cyclone or 2021 Winter Storm Uri in mid-December; nonetheless, the increasing frequency of extreme weather events suggests that another demand spike remains possible if not probable,” Rubin said. “If cold weather bottled up in Canada can escape southward in early January, for example — a not unlikely proposition — the February contract could quickly exceed $4.00/MMBtu.”

That said, without a “significant stretch of cold weather,” a grind lower for Nymex winter prices remains likely as a “robust winter storage trajectory” would see “upside price risks fade and longs flee winter contracts,” according to Rubin.

Meanwhile, looking upstream, Enverus Rig Analytics in its latest snapshot of U.S. drilling activity reported a 15-rig increase for the U.S. count as of Wednesday. Driven by gains in the Permian and Anadarko basins, the updated Enverus tally rose to 690, reflecting month/month and year/year increases of 4% and 74%, respectively.

“The last time the U.S. rig count was over 700 was March 30, 2020, in the early innings of the great Covid rig shed,” Enverus analysts said. “An 800 tally will be a more significant benchmark to cross as that is roughly where the count stood” prior to the start of the pandemic.

Should recent trends continue, “we could crawl out of this Covid hole sometime in 1H2022,” the Enverus analysts added.

Rig totals are grinding their way back to pre-Covid levels, but the upstream landscape has changed noticeably during the pandemic, according to the firm.

“Compared to March 1, 2020, the number of operators drilling wells in the U.S. has increased by 55 to 290 as of Dec. 15, showing greater industry participation, but at lower activity levels on average,” the Enverus analysts said. “This is evidenced by looking at the most active operators at the start of March 2020.”

As for the most notable basis shifts during the Dec. 9-15 period, points from the Mid-Atlantic north into New England produced the wildest price action, with the recent December warmth seemingly not enough to dispel upside winter price risks for densely populated and supply-constrained hubs in those regions.

Transco Zone 5 and Transco Zone 6 NY both saw January basis climb more than $1 for the period, rising to plus-$5.093 and plus-$4.576, respectively, according to Forward Look.

Recent forecasts during the week pointed to an overall theme of “high-end warm” temperatures transitioning to “something closer to normal on the national level” for the back half of December, with the pattern having the potential to deliver cold air from Canada into the northern United States, according to Bespoke Weather Services.

“We feel this variability can persist into at least early January before the next attempt at materially warming, perhaps around mid-January,” the firm said.