The economics of most U.S. natural gas plays, wet or dry, now are below breakeven levels after suffering as a result of the decline in commodity prices, according to a Barclays Capital analysis. Surprisingly to some perhaps, the Marcellus Shale was not the lowest-cost basin overall. 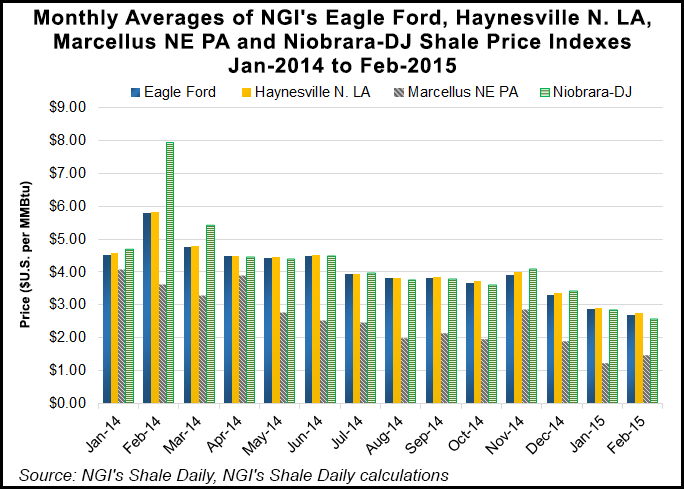 Natural gas prices are off about 30% from September levels, while oil prices are down by 50%, noted analysts Michael Cohen and Warren Russell. However, gas output continues to increase. With many drilling opportunities not able to make money at today’s commodity prices, there’s a “shrinking opportunity set.” The analysts attempted to figure out where those best opportunities are.

To conduct their review, they relied on company reports and data from consultancy Wood Mackenzie Ltd. The present value of well cash flows/initial investment (PV/I) was used to determine how profitable wells were under various price scenarios. The research focused on half-cycle economics to present the marginal opportunities in each play.

Several conclusions were made. First, most dry gas wells are “unattractive at current levels.” Low completion costs help reduce the price of Marcellus dry gas wells, which have an average 14 Bcf estimated ultimate recovery (EUR) rate, to a breakeven at $3.00-3.50/Mcf Henry Hub. At that level, wells in the Haynesville Shale, with 12 Bcf EUR, and the Utica Shale,14 Bcf EUR, “look slightly less attractive,” the analysts said.

“However, as prices fall to $3.00 and below, Marcellus dry gas wells, whose production we assume is sold into the Dominion South pool, appear worse off relative to peers.” Basis risk at Dominion South was accounted for by assuming a static discount of $1.00/MMBtu. Marcellus output sold into “more economic pools,” such as Columbia Gas Transmission (TCO), “would have superior economics relative to peers.”

The most attractive wells for the money were found in the Eagle Ford Shale. While most wet gas wells are uneconomic at current prices, profitable opportunities still exist.

“As expected, the higher the liquid content and the higher the basis risk, the more challenged the play at current prices,” said the Barclays analysts. Wells in the Northeast have the lowest realized natural gas liquids (NGL) prices, about 34% of West Texas Intermediate. Bakken Shale NGL prices followed at 36%, with the Eagle Ford at 39%.

“The wells selected from the Northeast were also the gassiest of the group,” the analysts said. “Marcellus rich gas wells performed the worst as a result of basis risk and lower realized NGL prices. At $50 oil and $3 gas, these wells have PV/I ratios that are deep in negative territory. At the other end of the spectrum, Bakken and Eagle Ford wells look more attractive.”

Barclays results, of course, come with caveats. For instance, average well type curves vary widely from play to play and often within each play, the analysts acknowledged.

“It is not ideal to represent an entire play with one or two type curves but for simplicity, using Wood Mackenzie and company reports, we have assumed type curves that we believe are realistic, if sometimes optimistic…This analysis is not intended to reflect the decision-making of individual companies but to give a general representation of how different well types perform in alternative price environments.”

Infrastructure is improving, particularly in the Northeast, and growth should result in higher producer setbacks, which would boost profitability. Basis differentials also vary, but the analysts assumed they remained constant for the study.

“Though U.S. shale economics are severely challenged at current price levels, we believe profitable investment opportunities do exist and should grow as know-how from oil plays is applied, as service costs decline and as companies improve recovery rates. Gas basins, such as the Haynesville, that were passed over as producers sought to cash in on high oil prices may now be receiving another look.”

Higher gas-directed rig counts in the Haynesville, Denver-Julesburg Basin and the Eagle Ford “will indicate whether producers are indeed shifting focus from oil to gas. For now, however, the fall in prices across the energy complex has resulted in lower rig counts for almost all basins, regardless of economics.”

Associated gas production also should be affected by the decline in drilling over the coming months. “However, we expect associated gas volumes in Texas and North Dakota, which account for about 10% of current Lower 48 gas output, to continue growing, albeit at a lower rate than our previous expectations.”