Increasingly frequent earthquakes in the Permian Basin’s Delaware sub-basin are mostly linked to oil and gas activity, according to a new study led by researchers at the University of Texas at Austin (UT). 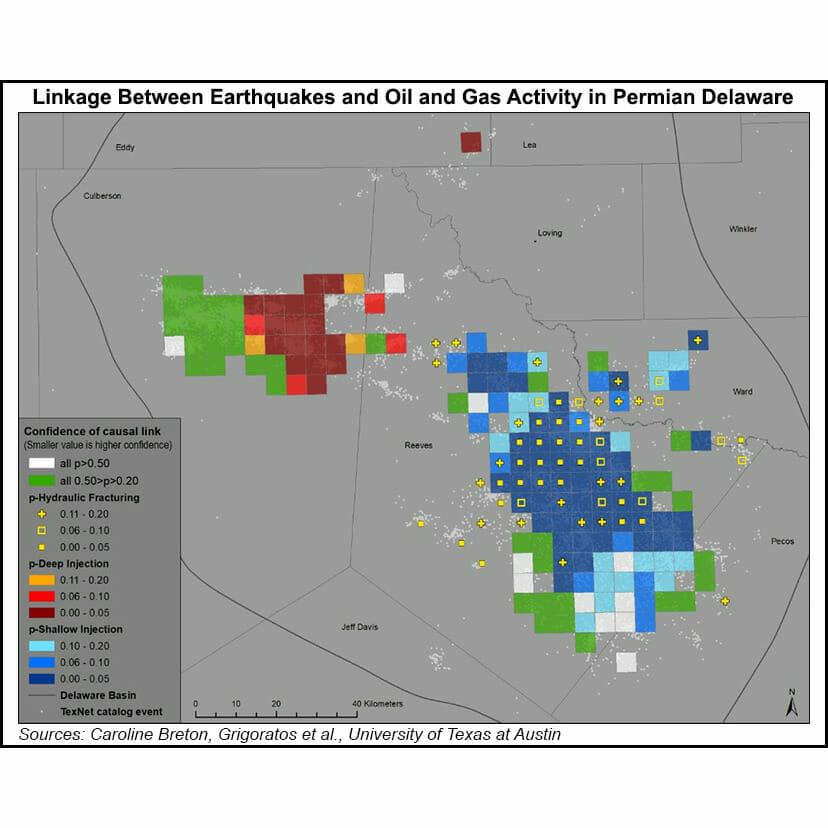 Among the most prolific oil and gas producing regions in the Lower 48, the Delaware’s surface area covers about 6.4 million acres in West Texas and southeastern New Mexico. Earthquakes have been rising in the region since 2009 amid growth in directional drilling combined with hydraulic fracturing (fracking).

“This paper shows that we now know a lot about how oil and gas activities and seismic activity are connected,” said study co-author Alexandros Savvaidis, a researcher at the UT Bureau of Economic Geology (BEG).

Researchers examined data that tracked seismicity and oil and gas production in the region from 2017 to 2020. They found that 68% of earthquakes above magnitude 1.5 “were highly associated with one or more of the following oil and gas production activities: hydraulic fracturing or the disposal of produced formation water into either shallow or deep geologic formations.”

Reinjection of formation water produced alongside oil and gas, aka produced water, into disposal wells is playing a larger role than fracking in causing the quakes, according to the research.

A magnitude 5.0 earthquake that occurred in 2020 in Mentone, TX, for example, “happened in a region where seismicity was strongly associated with deep produced water injection,” the authors said.

Fracking, meanwhile, was linked to just 13% of the earthquakes. “However, this was higher than previously expected,” the authors said.

“Although there is still much to learn and more work to be done, especially when it comes to mitigating and forecasting, our knowledge of the linkage between water disposal, hydraulic fracturing and earthquakes continues to improve,” Tinker said. “This knowledge helps academics, regulators and industry work together to mitigate and minimize risk.”

Lead author Iason Grigoratos developed the model used in the study. “We believe the framework presented in this study is applicable to other regions around the world that might be experiencing seismicity linked to subsurface fluid injection operations,” said Grigoratos.

The study was published in the journal, Seismological Research Letters.

How is Industry Responding?

The increase in earthquakes has caught the attention of the industry and regulators alike. Last December, for example, the Railroad Commission of Texas (RRC) suspended all disposal well permits for injection into deep formations following a series of quakes.

“There has certainly been a lot of effort from both the operators and regulators to combat induced seismicity in the Permian,” Rystad Energy’s Ryan Hassler, senior analyst for shale research, told NGI’s Shale Daily. He cited substantial increases in the amount of produced water that is treated for reuse in fracking instead of being injected into disposal wells.

Rystad expects treated water volumes in the Permian’s Delaware and Midland sub-basins to rise by about 39% and 28%, respectively, in 2022 versus 2021. Both basins saw year/year increases of more than 20% in 2021 as well.

“This is not to say that we are reducing disposal volumes, as the Delaware is still forecast to see an 18% increase in total disposal volumes for the year, with the Midland at 20%, but this does indicate that we are continually moving in the right direction by increasing those treated water volumes year-over-year,” Hassler said. “In both the Delaware and Midland, that increased volume in treated water is able to satisfy roughly 42% of the total frac water demand for 2022. This percentage is expected to grow to roughly 48% for both basins by 2026 as operators continue to increase recycling programs.”

Hassler noted that, “There likely still needs to be further collaboration between operators and midstreams, to increase the availability of produced water through the basins with a greater network of produced water pipeline infrastructure, and to tie all of that into large-scale recycling facilities, but this is something that most operators are taking much more seriously now and we are seeing more investments in this space being made.”

“Many oil and natural gas operators in Texas were involved in the research that informed the study, as industry believes that more data is always better and continues to work collaboratively and extensively with the Railroad Commission, industry peers, TexNet and CISR to monitor and share data and gather information that guides industry practices,” Texas Oil and Gas Association President Todd Staples told NGI’s Shale Daily. “Industry is actively using proven technology to improve all aspects of operations through practices such as pre-completion risk assessment, proper monitoring and mitigation protocols.

“Industry is also working collaboratively with lawmakers, regulators and academia to facilitate exploring the feasibility of recycling produced water in various, beneficial applications outside the oilfield, including supporting the work of the Texas Produced Water Consortium which was created by Senate Bill 601, authored by Senator Charles Perry and Representative Dustin Burrows, in 2021.”

“Texas continues to lead the country in a collaborative manner with key stakeholders, including academia, the energy sector, Texas legislature and Railroad Commission to provide more reliable data and resources to mitigate and minimize risk,” Longanecker told NGI’s Shale Daily.

He cited two operator-led response plans to earthquakes approved by the RRC in Texas’ Culberson and Stanton counties. “This demonstrates alignment and collaboration between industry and RRC on data driven efforts to address seismicity issues within critical response areas.”

Longanecker added, “Over the past several years, operators across the Permian have also been working to minimize the amount of freshwater used” in operations, and are maximizing produced water recycling. “TIPRO also supported the creation of [the] Produced Water Consortium via Senate Bill 601 last session, which has a core focus on bringing together information and resources to study the economics and technologies related to beneficial uses of produced water.”