Natural gas futures continued to slide Thursday as the latest government storage data failed to reflect enough tightening in the supply/demand balance to support prices. The July Nymex contract, on its first day in the prompt-month position, settled 5.9 cents lower at $1.827/MMBtu. August fell 5.3 cents to $1.919. 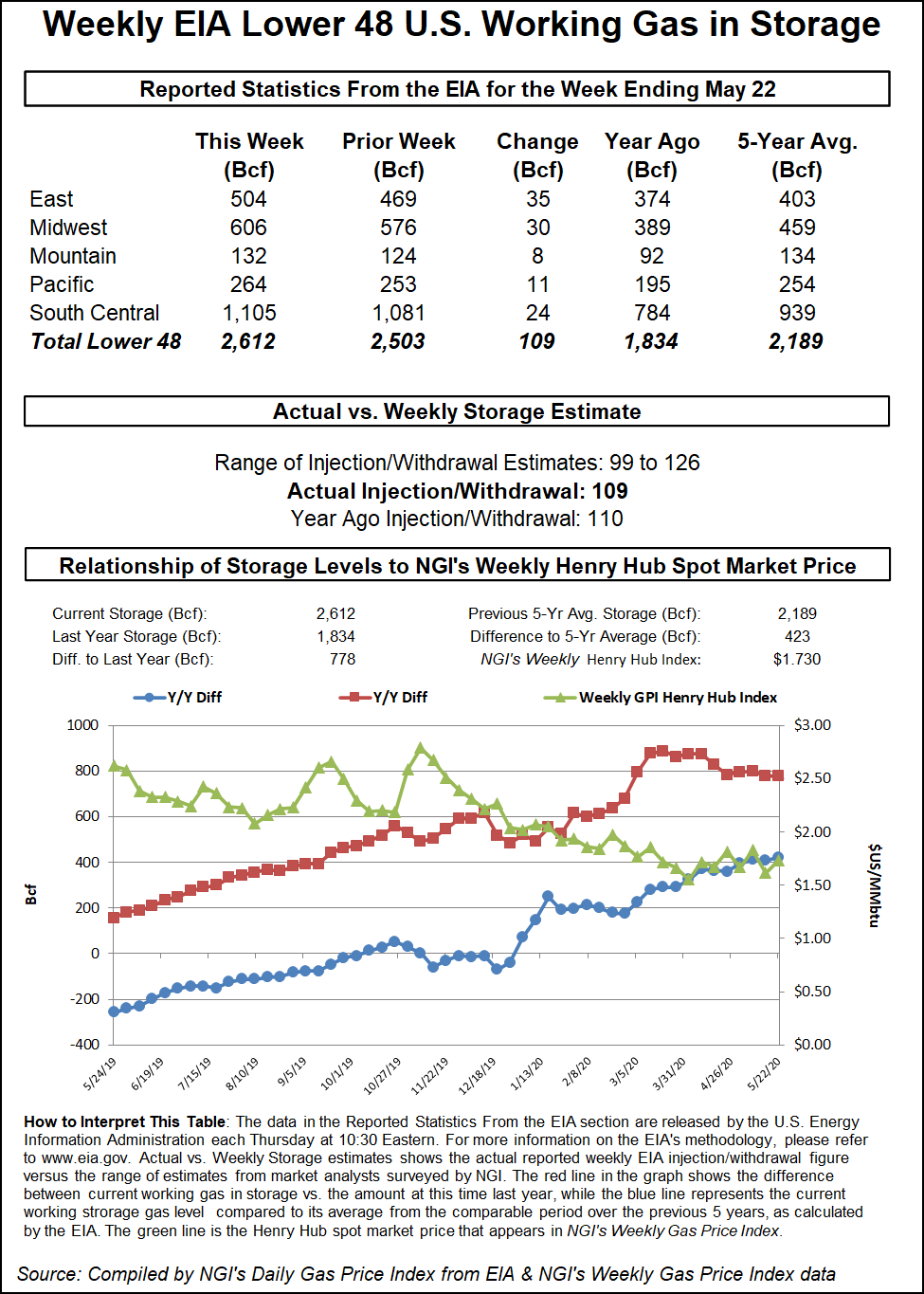 Spot gas, which traded Thursday for delivery Friday through Sunday (May 31), also weakened amid a mostly moderate weather forecast for the Lower 48. NGI’s Spot Gas National Avg. was down 8.0 cents to $1.605.

Bespoke Weather Services said with the June Nymex futures contract having rolled off the board, there was a risk of July selling off somewhat given its premium to June. Prompt-month prices also have been stuck in a range from the $1.60s to the $1.90s for the last few months, the firm noted.

However, the main driver of Thursday’s sell-off was the latest Energy Information Administration (EIA) storage report, which showed a plump 109 Bcf injection into inventories for the week ending May 22. The reported build was a few Bcf above Bespoke’s estimate and on the higher end of a wide range of projections.

The 109 Bcf injection “does confirm balance tightening, but not enough to suggest that we are significantly lowering the risk of completely filling storage this fall,” Bespoke said.

NatGasWeather analyst Andrea Paltrinieri characterized the EIA figure as “a no good number.” Participating on The Desk’s online energy chat platform Enelyst, Paltrinieri said he would have preferred to see an injection in the high 90s Bcf range in order to confirm better tightening of the supply/demand balance.

Broken down by region, the East injected 35 Bcf into storage, and the Midwest added 30 Bcf, according to EIA. South Central inventories rose by 24 Bcf, including a 20 Bcf build in nonsalt facilities and 3 Bcf build in salts. The Pacific added 11 Bcf into stocks, while the Mountain region injected 8 Bcf.

Despite the hefty build, another Enelyst participant noted that the 109 Bcf injection was an improvement when adjusted for weather. “It’s still less than 1 Bcf loose. Power burns are picking up quickly with demand, and we could see more tightening…just don’t know about June production and liquefied natural gas.”

The latest data from Genscape Inc. showed that U.S. production in the past several days has declined slightly from near two-week highs that on Tuesday reached 86.6 Bcf/d. Production on Thursday was 85.7 Bcf/d, which is about 6.6 Bcf/d less than last month’s average, according to the firm, and the result of production shut-ins around the country.

“While production has rebounded slightly off of May 20 lows of 84.9 Bcf/d, Wednesday’s and Thursday’s values suggest a slight reversal to the downside,” Genscape analyst Preston Fussee-Durham said.

On Thursday, the largest declines relative to Tuesday’s highs were seen in the Permian Basin (down 443 MMcf/d) and Northeast Pennsylvania (down 431 MMcf/d), according to Genscape. That said, Wednesday’s Northeast Pennsylvania production numbers were revised higher by 305 MMcf/d, “suggesting the majority of observed declines can likely be attributed to decreased Permian production,” Fussee-Durham said.

Looking ahead, Bespoke expects summer weather to become increasingly important as the move to a La Niña base state favors a hot summer, which may add some strength to power burns. At some point in the next two-to-three weeks, the firm expects prices to make another run toward $2.00, but it pointed out that selling pressure could continue in the near term before getting a push higher.

“This would keep the general prompt-month trading range alive and well.”

Even with the extreme early season heat, prices across California and the Southwest fell Thursday. The most significant declines were seen in the Southwest, where Kern Delivery spot gas tumbled 14.0 cents to $1.715. PG&E Citygate dropped 10.0 cents to $2.515.

The decreases spilled over into producing regions farther upstream. The Permian’s Waha hub dropped 9.0 cents day/day to average $1.545, while OGT in the Midcontinent fell 10.0 cents to $1.585.

Most other markets across the country were down anywhere from a few pennies to around 10.0 cents, though some slightly steeper declines were seen on the East Coast. In Appalachia, Texas Eastern M-3, Delivery spot gas prices plunged 14.0 cents to $1.370. Downstream, Algonquin Citygate tumbled 22.0 cents day/day to $1.365.

However, the weakness in Northeast markets may be short lived. Although weather models have shifted slightly warmer since Tuesday’s forecast, a sharp surge of cool air was set to push out the recent unseasonable heat in the Northeast, according to Genscape. The firm’s meteorologists were predicting the cold spell to bring a surge in demand between Sunday and Wednesday, though milder temperatures are expected toward the end of next week.