The Williston Basin’s Bakken and Three Forks formations within Montana and North Dakota contain substantial natural gas and oil reserves yet to be discovered, but extensive drilling since 2013 has reduced the overall amount, according to the U.S. Geological Survey (USGS). 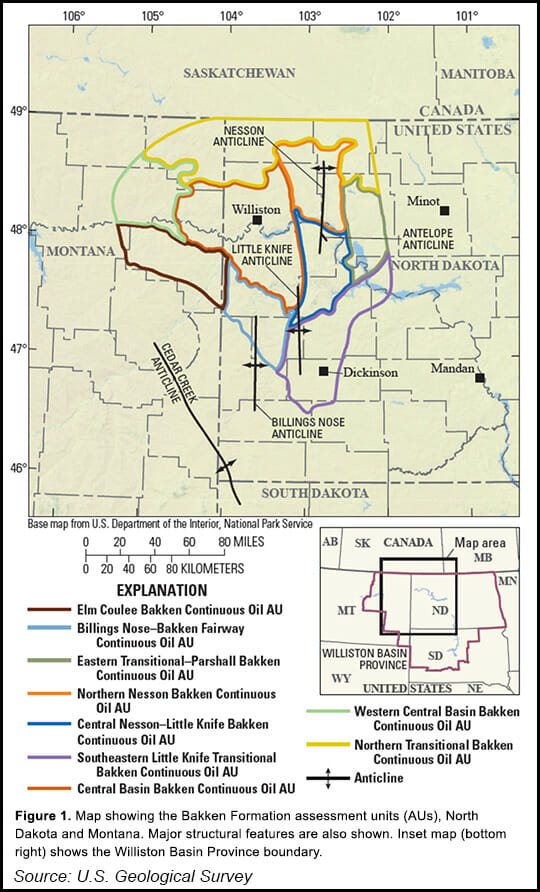 Researchers in the latest report, as in the one published in 2013, assessed the undiscovered, technically recoverable and continuous, i.e. unconventional, resources in the Upper Devonian to Lower Mississippian Bakken and Upper Devonian Three Forks.

“To date, more than 17,500 total wells have been drilled into the Bakken and Three Forks formations, and approximately 4 billion bbl of oil have been produced from these units.”

Undiscovered resources are estimated to exist based on geologic, geophysical and geochemical information. They differ from proven reserves, which are confirmed to exist via drilling and production. The assessments focus on areas where less drilling has occurred and less is known about potential resources.

USGS’s Sarah Ryker, associate director for Energy and Minerals, said the Williston “has, in many ways, mirrored our broader energy work. What began with assessments of potential energy resources has grown to encompass both energy and water production, infrastructure and impacts, demonstrating the importance of both to the regional and national economies.”

The assessment of undiscovered resources is a “science-based estimate of what may be discovered in the basin in the future,” Ryker said. “It’s different from – and complementary to  – industry production numbers, which focus on the known or discovered resource. Our research focuses on areas of uncertainty.”

The latest assessment contributes to an ongoing effort, said researchers, to “better understand interactions and dependencies between energy resources and water resources.”

USGS also had conducted an assessment in 2016 regarding the Williston’s water and proppant requirements. It also assessed the water production associated with potential future production of the undiscovered resources.

“This assessment was conducted based on a peer-reviewed, publicly available methodology that is used for all USGS oil and gas assessments,” researchers noted. “This allows an apples-to-apples comparison for USGS assessments across the country and over time.”

According to the Drilling Productivity Report issued earlier this month by the Energy Information Administration, Bakken oil output is forecast to climb in January month/month by 8,000 b/d to 1.154 million b/d. The North Dakota Department of Mineral Resources in its November report, about which 96% of output is from the Bakken/Three Forks, said gas production averaged 3.02 Bcf/d in September, versus 2.96 Bcf/d in August. Oil production increased month/month to 1.113 million b/d from 1.017 million b/d.