The Permian Basin and Oklahoma’s stacked reservoirs will surpass all onshore areas of the United States for oil drilling this year, but double-digit gains also are forecast for the Bakken, Eagle Ford and Niobrara formations as producers raise their spending and complete more wells, according to a review by Barclays. 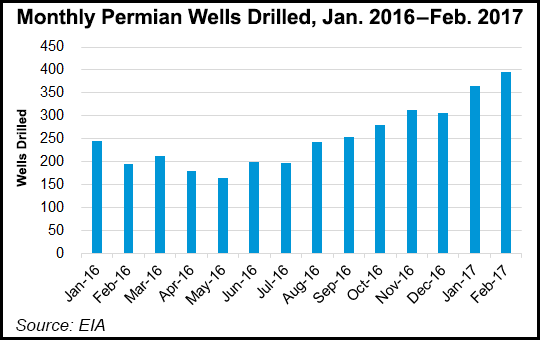 “Since January, our exit-to-exit (4Q2016/4Q2017) growth forecast for Lower 48 onshore has been revised higher by 340,000 b/d to 770,000 b/d” because of baseline downward revisions and higher drilling and completion expectations. “We now forecast U.S. crude oil production to reach a multi-decade high by December, within sights of the all-time high reached in 1970.”

Many operators plan to boost their U.S. onshore spending by 50% or more from 2016, which should lead to substantial month/month production growth as the year progresses, particularly in the Permian, the analysts said. Although capital spending typically is dependent on commodity prices, producers have been actively hedging for the past two quarters, giving them a measure of stability in margins to ensure they can achieve their goals.

“The focus for many producers will remain on longer laterals and enhanced completions, which should continue to drive well productivity higher in 2017,” Russell and Cohen said.

As producers increase their capital expenditures (capex) and sharpen their focus in the SCOOP and STACK, output from the two areas in Oklahoma is seen increasing from 2016 by around 70,000 b/d. Combined, the plays are the second most actively drilled area in the United States behind the Permian.

Using data from Rystad Energy, the analysts said nearly 75% of the resource base in the SCOOP and STACK is concentrated among only six E&P companies, which are expected to increase total capex by 50% or more during 2017. Well productivity improvements on a percentage basis have been on par in Oklahoma’s stacked plays with the Permian, according to Barclays. The 12-month production profiles for oil wells in the stacked reservoirs have more than doubled from 2013-2015, to 70,000 bbl from roughly 30,000 bbl.

“Continued increases in well productivity, coupled with increased drilling and completion activity, should result in production growth that exceeds 30% year/year, or roughly 70,000 b/d, making the SCOOP/STACK the second-largest contributor to U.S. onshore crude oil production growth behind the Permian,” said Russell and Cohen.

“The Eagle Ford remains an afterthought for many of the larger producers,” Barclays analysts said. “Some participants in the Eagle Ford are expected to direct a larger portion of their 2017 capital expenditure budgets toward higher-returning wells in the Permian and even the SCOOP and STACK.

“Others have divested their acreage, a trend that, if continued, could result in more concentrated ownership among companies dedicated to developing the play. This could ultimately push Eagle Ford production growth rates higher than our current expectations.” Last year Eagle Ford operators relied on drilled but uncompleted wells (DUC) for incremental volumes but expect producers to increase drilling activity this year.

Meanwhile, in the Bakken, gross well additions are seen increasing by around 40% from a year ago, enough to turn declining production numbers around.

“We forecast that production will decline 20,000 b/d year/year but increase by 90,000 b/d from 4Q2016 to 4Q2017,” Russell and Cohen said. “Certain key Bakken producers are relying more on their DUC backlogs to add volume in 2017, which means the rig count may not be an accurate indicator of the ramp-up in activity.”

While Bakken economics also have been challenged by a lack of pipeline takeaway capacity, the startup of Dakota Access Pipeline should improve the situation.

Niobrara gross well additions also are expected to jump more than 30% this year, but likely weighted to the second half of 2017. Production is expected to remain flat from 2016 but increase by 50,000 b/d from the end of 2016 to 4Q2017. Drilling activity “remains sluggish, but we look for activity to pick up later in the year.”