Canada’s rich gas vein, the Montney formation, dominates British Columbia (BC) production, even though the industry has only scratched the surface to date, the BC Oil and Gas Commission (BCOGC) said. 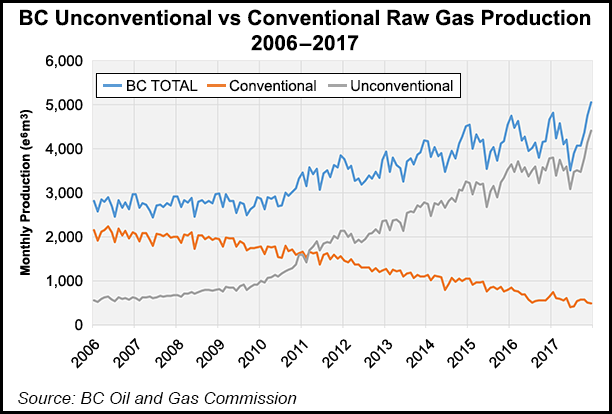 The northern deposit attracts nine of 10 new wells in the province and accounted for 4.9 Bcf/d, or 77%, of BC’s natural gas output in 2017, according to the latest annual reserves and production report.

The 42 Tcf of Montney gas booked as market-ready reserves since horizontal drilling and hydraulic fracturing arrived to enable development in 2005 are only 2% of the resource, the BCOGC reported.

The prolific formation, named after a village on the Alaska Highway, sprawls at varying depths across 130,000 square kilometers (52,000 square miles) of BC and Alberta. The provinces split the geology evenly by area, but BC has about 60% of the gas estimated to figure in the Montney marketable reserve forecast, or 271 Tcf of the formation total 449 Tcf.

BC also has the gas industry’s economic accelerator, formation sweet spots rich in liquid byproducts that fetch high value as fuels and petrochemical raw materials such as gasoline-like condensate, propane and butane.

The BC share of the currently forecast Montney natural gasliquids marketable reserves total is 87%, or 12.6 billion bbl of a formation total 14.5 billion bbl.

New wells in the wettest Montney locations yield more than 100 bbl/1 MMcf of gas, according to the BCOGC. Drilling has stopped in another BC shale structure that to date produces only dry gas, the more northerly Horn River.