Montana’s 0.5% “tax holiday” tariff on new oil/natural gas production would be increased to 4.5% under a proposal (HB 215) in the state legislature. 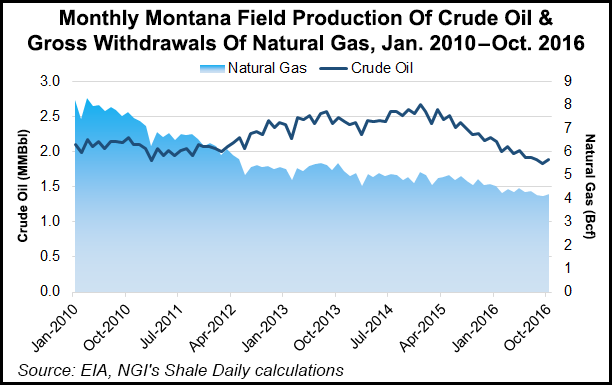 Seeking “a fairer tax system,” Rep. Mary Ann Dunwell offered HB 215 earlier this month as a way to eliminate the state’s current low tax on new oil/gas wells and replace it starting next year with a higher tax, to be followed by an increase to 9% after 12 to 18 months.

Montana Petroleum Association (MPA) officials, who testified on Thursday against HB 215, told NGI that the lower production tax has only limited applications given the relative lack of new drilling activity in today’s low commodity price environment. Some form of a proposal to eliminate the provision has been proposed at the start of each state legislative session for some time, but never gets anywhere, they said.

“Right now, we don’t have any producing wells on the lower tax rate,” said an MPA spokesperson. “It was passed by the legislature in 1993, but it refers only to new wells — not refracks, not re-drillings; only on new wells for 12 or 18 months, depending on whether they are horizontal or vertical wells.”

Pressures to find new sources of revenue have prompted the latest proposal, and according to the MPA spokesperson, HB 215 “doesn’t promise a whole lot of revenue, and it is based on projections of higher oil prices and activity. It is based on fairly hypothetical projections.”

An employee in the Montana Department of Revenue, Dunwell carried a similar bill two years ago that ended up being tabled in the lower House tax committee. (Dunwell is currently on a four-month leave of absence from the state agency.)

The bill increases the tax rate on initial production of oil and gas from 0.5% (plus license and privilege tax) to 4.5% for the first 12-18 months of a well, after which the rate rebounds to the full 9%, MPA representatives testified on Thursday. The 12-month “holiday” is afforded to vertically drilled wells, and the 18-month “holiday” is afforded to horizontally drilled wells.

HB 215’s supporters include Northern Plains Resource Council, MT Environmental Information Council, and the Montana Audubon Society. In opposing the bills, MPA was joined by Continental Resources and the Montana Association of Oil, Gas and Coal Counties. All opponents testified that the incentive was passed 24 years ago to stimulate oil exploration and production.

Not every well produces, and operational costs, high wages, and other taxes are paid regardless of the “tax holiday,” MPA argued. “In 2015 alone, the industry paid more than $2.3 billion in employee wages to Montanans, along with corporate income taxes,” MPA representatives told state lawmakers. Corporate income and individual income taxes account for 62% of Montana state revenue.

They said that oil/gas companies pay two-thirds higher than the state average in wages, or about $71,000/employee annually.

“According to the Montana legislative fiscal division, total collections from oil and gas production for the last seven years exceeded $1.6 billion, divided between the state general fund and local counties where drilling occurs,” MPA officials testified. “MPA stands by the existing policy as an incentive in an otherwise less than competitive oil and gas environment (considering our geology).”